Greetings Trekaterians, Having been born just post the Industrial Revolution and pre the Moon landings your columnist, dear reader, was forced to wait weekly…yes, weekly, for his fix of Star Trek. Lacking accessibility to the World Wide Interweb until the dawn of the 21st Century, my peers and I developed patience unmatched and for many years stood by with bated breath for our weekly fix of Roddenberry’s lovechild.

Well, eventually the rest of the world caught up and by the mid 90’s our TV screens were awash with Star Trek shows and they carried the story on from Kirk, Spock and McCoy in various ways. All never forgot their origins however and respected their roots.  With all the recent fuss over ST: TOS’s 50th Anniversary we tend to forget, there were a few other red-letter days prior to that. In the aforementioned decade, we celebrated Star Trek’s 30th anniversary and the ST shows on air made note of that each, in their own way.

The pick of that crop, I believe, was the Deep Space Nine episode “Trials and Tribble-ations” 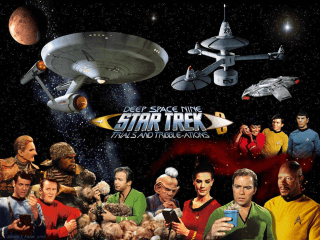 The producers and writers decided to utilise the technology recently developed for “Forrest Gump” and put their current characters into a classic TOS episode. That episode was “The Trouble with Tribbles,” one of the few comedic episodes made which was written by then newbie Sci-Fi writer David Gerrold. The original show became a beloved classic and so to even consider tampering with it was a brave decision by the DS9 showrunners.

But brave it was and great was the result! With tender loving care, this new episode was made and our current (then) heroes were inserted seamlessly alongside Kirk and his crew. New models were made of the Enterprise as well as Space Station K7 and a well-written plot integrated nicely with the TOS storyline as well. You can see much fun was had with the hairstyles and costumes and one of my favourite moments is Worf in the bar being embarrassed by the 1960’s Klingons and the amazement of his crewmates to be told who they were. Clever use was made of TOS scenes and our current characters were shown sometimes to be involved out-of-shot.

Another point of note was the usage of the original actor who played the villain in the original TOS show reprising the role in the new.

The reason I bring all this up is that I was just skimming the ether the other day and I discovered this little gem on Youtube.

It’s a special made about the making of the DS9 episode I mention. It’s probably on a set of extras on some DVD/Blu-Ray set somewhere but obviously, it was made as a TV “extra” at the time. To watch the actors reflect their views on the show and the producers and special effects guys show their “cutting edge” technology is certainly an insight into TV production at the time. I believe to fully enjoy the whole set-up and experience the little nuances that the mid 90’s producers injected their episode with, one needs to watch the shows in sequence being the Original Series’s “Trouble with Tribbles” then DS9’s “Trials and Tribble-ations” finishing off with “The Making of..” on YouTube.

Until next time fellow, Trekkers-Boldly go!