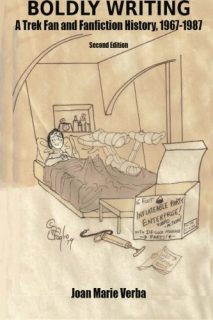 Boldly Writing – A Trek Fan and Fanfiction History 1967 – 1987 by Joan Marie Verba is a quietly wonderful book which will appeal to those with an interest in the roots of fan fiction and the development of really the first true fandom as we understand the phenomenon today.

Verba, an avid collector and contributor to fanzines from ‘the beginning’ (she first encountered the fandom in 1969 although she had loved Star Trek from the first episode), gives us a history of fanzines from the valuable perspective of someone who was actually part of the movement.  Her own observations and explanations of events, movements and ‘characters’ give context to that which would otherwise be quite disorientating.

I must confess, previous to reading Boldly Writing I did have some idea of the world of fanzines.  I have done my research sporadically to supplement my reviews of the earlier Star Trek novels.  My own research opened my eyes to a fascinating and interconnected world of the fan and professional writing, and I got rather excited when I noticed (belatedly) links between fanzine contributors and the authors of the Star Trek TOS Pocket Book novels.  However, I didn’t know where to begin, I had some author names, some dates, some fanzine names, I didn’t know how to understand the data.  Boldly Writing fills in those gaps.

For each era Verba gives a short introduction outlining the trends of those years and then launches into descriptions of notable fanzine publications on a year by year basis.  Verba makes sure to point out stories, letters, and particular fans which will cause ripples within the fandom.

Verba uses her often firsthand knowledge of situations to explain the context and the importance of a fanzine, fan fiction, article or convention.  The explanations are necessarily brief given the wide date range, a sentence or two at most usually unless the work/event was of particular import or Verba was in attendance.  I rather liked the sections where she described her own experiences a little more as they did break up the otherwise dry fanzine listings (not that I’m complaining, I found it fascinating!).

Of interest to many will be the section which explains the origin of the ‘Mary Sue’ character type/trope.  Verba introduces us to where the term first appeared (Menagerie 2), explains the term and provides the satire in full ‘A Trekkies Tale’ – which first appeared in December 1973.  Verba also includes a short speculation about the reason for the popularity of the Mary Sue story.

What really surprised me was the variety of content that Verba describes as being present in fanzines.  In addition to short stories and novel length endeavours, satire, poetry, articles, reviews and letters were a big part of fanzines.  Personally, I love poetry, and I find it sad that there aren’t more people writing poetry for any fandom, let alone Star Trek in the present.  The first excerpt that Verba provides is a poem called The Territory of Rigel by Dorothy Jones Heydt (1967) the form of which Verba says influenced fanzine poetry for years afterwards.  A poetry buff might recognise that it’s based on ancient Greek poetic forms.

Verba states in her preface that her motivation for writing Boldly Writing was the blasé attitude some fans had to accurately record fanzine history.  Fans and fanzines, writers and readers; they were instrumental in keeping Star Trek alive and ensuring the continuation of this franchise so many of us love:

“That’s why I care that these individuals should not be forgotten.  Although most Star Trek fans recognise the authors who write Star Trek professional novels, very few know the names of those who wrote all those wonderful Star Trek fanzine stories when the release of a new original Star Trek novel was still a rare event”.

Her passion is clear in this regard and as I was reading boldly writing and the same names kept popping up I started to feel excited about it too!  “Oh!” I’d think, “I remember this lady, she’s been writing since the beginning!” or I’d see a name of a professional author I saw and think, “Ah!  So that’s when she started!”.  Verba is, is careful to emphasise when a fanzine author would become a professional author or when a fanzine story was reworked from a Star Trek story into general Sci-fi.  A point which is often referred to in Boldly Writing is that many authors began their journey in fanzines, honing their skills with practice and criticism until finally, they made their first sale.

Another point which becomes incredibly clear (which Verba often highlights) and which I believe is very important is the predominance of female writers, editors, and organisers in the Star Trek fandom.  It is made clear that women were the driving force behind the fandom by sheer force of numbers who were involved in the production and consumption of fanzines.  Naturally, a male fan (in this case one Damon Hill) remarked that fanzine writers needed to put science fiction back into Star Trek and implied that, 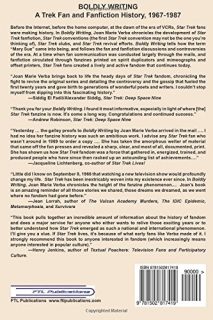 It becomes clear through Verba’s explanations throughout Boldly Writing that there were definite shifts and phases in the fanzine community and also much misinformation and fans blowing things out of proportion – some things never change, do they?  One example is the above ‘women ruin sci-fi’ or ‘there’s too much K/S (slash)’ – in 1982 Verba counts 55 Star Trek fanzines listed in Forum, only two of them being K/S.  Other things that made me laugh (and shake my head!) was the fan reaction to rumour; one of which was the fan reaction to the news that Spock would die in Star Trek II: TWOK.  Fans put an ad in the “Hollywood Reporter highlighting the tremendous financial losses to Paramount should Spock be killed in the new Star Trek movie”. Verba’s commentary on the actions of the Star Trek fan community are often insightful and help those of us who are quite removed from that era understand what was going on at any particular time.

I particularly enjoyed The Early Movie Years section, especially as Verba highlighted areas of special interest to me at the moment and I was delighted to see that my own commentary echoes fan criticism in the 1980s of the Pocket Books pro novels (I read and review ST: TOS pro novels).  I think most people would probably find this section the most engaging and the most familiar as Verba highlights trends inspired by the movies.  It is in this period that the fandom (or actually fandoms) appear to have taken the form that they have today (from my perspective), for good and for bad.

Verba concludes her analysis with a short epilogue of sorts.  The decline of printed fanzines and the rise of the internet; the disbanding of the Star Trek We committee after 25 years; the continuation of the Pocket Books TOS series and their Strange New Worlds writing contests.  Verba ends with her own reflection:

“We went places and established paths where none (or at least few) had gone before, and experienced a great adventure”.

From my perspective Boldly Writing – A Trek Fan and Fanfiction History, 1967-1987 is a fantastic nonfiction book and for those with an interest in Star Trek and general fandom development, fan literature, or relevant areas of anthropology it is absolutely a must-read.  By the very nature of the content, it is a pretty dry but Verba’s own memories and interjections lighten it up and prevent it being solely a dry reference only work.  Boldly Writing is a labour of love and deserves to be more widely read but it won’t be to everyone’s taste – it’s a history book shedding light on an era of fan publishing which was in danger of being forgotten, but Verba’s work in Boldly Writing has not only ensured that the pioneers of the Star Trek fandom are recorded but also those of us dipping our toes into an era of fandom and fanfiction many years before we were born to have somewhere to start.

If this appeals to you, please show your support for Joan Verba and buy a copy of Boldly Writing – A Trek Fan and Fanfiction History, 1967-1987.

Find out more about this outstanding Author at the following links: