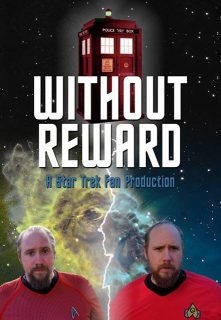 There is something of an unwritten code of courtesy folks have when discussing fan films. Sure, filmmakers do appreciate constructive criticism (‘try such and such filter in a shot like this, it helps with that effect’, or ‘video was great, the sound was off…gotta correct for wind in some shots’ or ‘there is a cord visible in the doorway…’) but it is generally frowned upon to devolve into pointless ‘that sucks’ comments, or to criticize the filmmaker with personal attacks. After watching Vance Major’s latest film, my conscience will not allow me to remain silent; I must break the rule….Vance Major is a Monster. He is Evil Incarnate. He is a Degenerate sicko who enjoys tormenting people for fun.

He has announced on Facebook, and in various podcast interviews (including one hosted by this author…check out our episode of ‘The Final Frontier’ podcast, Episode #3) that he is soon retiring, and is finishing up his film runs to spend more time with the family and pursue other projects. So, what does the guy do? After such an announcement, what does the Monster do?

He releases an incredibly Epic, Fantastic, Phenomenal short film, “Without Reward,” just to make us all feel even more miserable about him leaving the fan film game.

If you haven’t been watching Vance Major’s films, you should.  The only complaint I really have is that he isn’t filming or releasing things in straight chronological order, but the films relate, tie together into a tapestry that drops multiple hints of a much larger story. The snapshots stitch together, showing the adventures of Eric Minard and co. across Generations and Universes, on a quest for an artefact of legend and unimaginable power.  In spite of it being a larger tale, each episode also stands alone…you don’t need to see the entire saga to understand the personal connections, the poignant scenes, the phenomenal work was done by all of these actors showing us all sorts of aspects of the human condition: love, loss, laughter, hope, strength…there is always something worthwhile to be seen.

“Without Reward” continues that trend. In the spirit of avoiding Spoilers—the cover art for the episode gives this one away—Minard has a surprise encounter with himself from the Kelvin Universe. Aspects of coping with loss, having someone to talk to who—literally—understands you as well as they understand themselves, and, once again, hints at a bigger tale.

There are subtle things he does in his films that help to sort of differentiate his characters….Prime Universe Minard likes wearing red and blue when in civilian garb; Mirror Minard and Kelvin Minard have their own colour scheme.  These are films that you can go back and watch, to pick up on little details.

Vance does a fantastic job personifying the spirit of fan films. If you’ve heard or read interviews he has done, you’ll know that, instead of pushing for perfection and looking as polished and professional as possible, he will at times intentionally insert gaffes in his film, and, facing constraints of a filming budget that is funded from loose change found in sofa cushions, he and those who work with him put their hearts into it, and produce some fantastic films. They’ve overcome all sorts of hardships, sometimes utilizing ‘guerilla style’ filmmaking, and going through every low-budget gimmick that even Hollywood A-list directors like Sam Raimi utilized to get the most out of what they do. (A great example of this was his use of the Damaged TOS Sets at Starbase Studios…after some behind-the-scenes events left many of the sets missing pieces, damaged or otherwise gutted, Vance shot a film on those sets that was the story of Minard Surveying the Wreckage of the USS Constar after all hands were lost in his film “Crying, Wolf”.)

Yes, yes, I keep talking about his other films, without mentioning ‘Without Reward’…this is why the Editor in Chief tasks me with editorials and not reviews…. I tend to go off on odd tangents. But I don’t want to go too in-depth…these films are short, sweet, and to the point. Reading a review would take longer than watching the film. And you really should watch the film. Up until now, there have not been many Fan Films in the Kelvin Universe, and I want to see more…there is a lot of potentials to be explored, as Vance Major demonstrates. One thing I will say…you have to watch through to the end. Dude LOVES his post-credit scenes, and he likes tossing eater eggs in there…often involving extremely talented fans doing exceptional jobs portraying iconic characters from Star Trek.

Over the next few months, Vance Major is finishing the polish on his last few films. And then he’s walking away. I don’t know what we can do to stop him. But this madman is determined to rob fans of a brilliant talent. Maybe we can bribe him…maybe we can get George Takei to personally order him to keep making movies. Maybe we can hope his wife wants to get him out from underfoot, because he is spending too much time with family, and she locks him in the garage with a camera and TOS uniform…

In the meantime, even if we can’t stop him from retiring, we can enjoy the last few films. Check out “Without Reward” on YouTube, and maybe try to write a better review about it than I did.

The film will be released January 5th

The long-awaited Section 31 show starring Michelle Yeoh (Philippa Georgiou) has finally moved into Pre Production, with her set to