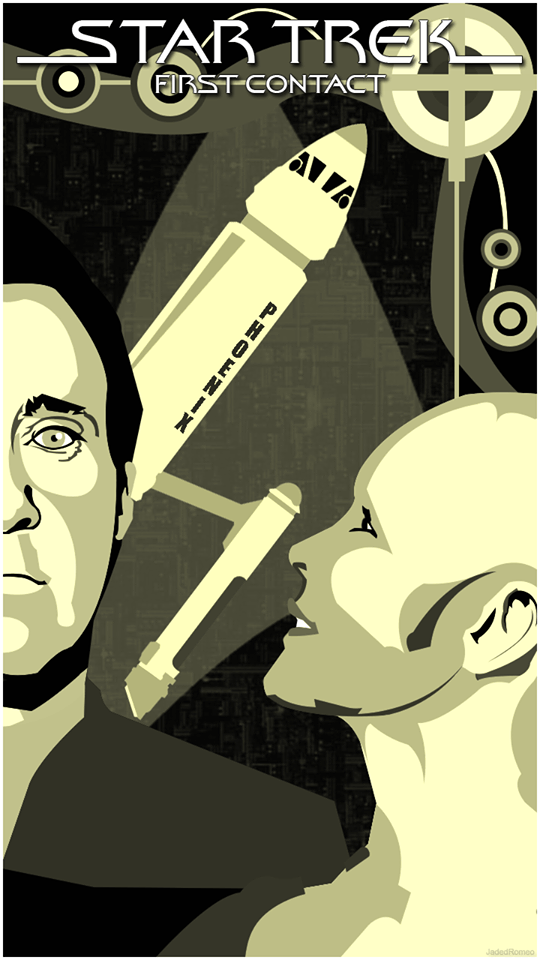 The beautiful thing about the end of an era is that a new beginning succeeds it. Not long after the death of Captain James T. Kirk on the big screen, I decided to follow my now-retired dad to Ft. Myers, Florida. In doing so, I was saying goodbye to the town in which I had graduated high school, but no longer seemed to have anything for me. I didn’t realize it at the time, but I was about to start a new adventure in life that would bring bliss and cool rewards for the next 17 years.

While I was attending Edison College studying English and Literature, I started working at a small airport facility called Ft. Myers Airways and began taking my first flight lessons. Not only did this prove to me that any career involving aeroplanes was not above me, I suddenly found that I was now in a career field in which I could greatly identify with my heroes on Star Trek (as well as the popular sitcom “Wings”. Watch that show on Netflix or Hulu sometime, and you’ll see the kind of happy life I had in aviation.) Real life was becoming every bit as interesting for me as life in the Federation was for our favourite characters, which only strengthened my conviction that the next Star Trek film needed to be a spectacular adventure.

There was quite a bit riding on the eighth Star Trek feature film. 1996 was the 30th anniversary of the franchise and we now had not one, but TWO Star Trek spinoff series running concurrently with each other; Deep Space Nine and Voyager. On top of that, this was to be the first ‘solo flight’ of Captain Picard and his stalwart crew on the big screen, so the stakes needed to be high on film, for they were indeed high in terms of the franchise’s reputation.

It came as a very little surprise that to create a high-stakes adventure worthy of Picard that Rick Berman and the writers would turn to the greatest nemesis we had seen on Star Trek to date…the return of the Borg. 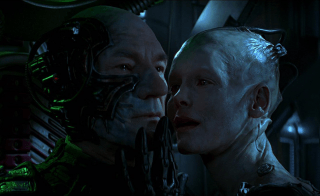 “The Best of Both Worlds” pushed the envelope of adventure and excitement not only in terms of a seemingly invincible enemy that our heroes were just barely able to stop but also behind the scenes too. Michael Piller’s spectacular two-parter taxed TNG’s production savvy and special effects budget to their very limits. This was an adventure that could not be followed up on until these characters had made the transition to the big screen. Now that Generations had already accomplished that, the light of another Borg invasion had just turned green.

With cast member Jonathan Frakes at the helm (who had proven himself a capable director with several of the show’s best episodes, including my all-time favorite TNG episode, “The Chase”), the bar was set high for veteran TNG writers Ron Moore and Brannon Braga to give us a worthy adventure to compliment this talent.

Initially wanting to go with an all-out Borg invasion with a fleet of cubes, Moore and Braga quickly discovered that that idea would not pan out even on a big-screen budget, especially with all of the visual revising of the Star Trek universe that would come with this film. These would include all new sets, uniform costumes, and several spaceship designs.

Personally, I don’t think that that’s true, not by a long shot! Apparently, studio heads and producers look at the numbers and critical acclaim of Trek’s successful time travel stories like “The City on the Edge of Forever” and Star Trek IV: The Voyage Home and come to this conclusion. But these two examples are the exception, not the rule. The truth is time travel tends to be overused and has to be done very carefully in order to be done well. (Besides, didn’t we just do time travel in the last movie?!?!)

Fortunately, the era in which the writers chose to have our heroes go back to serves this story’s purpose brilliantly. Apparently, the Borg, now realizing that humanity can hold their own against them in the present, have decided sacrifice a cube to invade Sector 001 and travel back into Earth’s past during the warp trials of Zefram Cochrane (originated by Glenn Corbett in the TOS episode “Metamorphosis”, now played by James Cromwell), when Earth was still in recovery from World War III and they had yet to make First Contact with an alien species. It is now up to our heroes to stop the Borg, convince the cynical Cochrane that his program should continue, and ensure that First Contact unfolds, as it should. The stakes are indeed appropriately high, as we are not just fighting for survival, but the very existence of the Federation!

With the appropriately epic story in place, producer Berman and director Frakes decided to take this opportunity to once again upgrade the look of the Star Trek universe. All-new sets, costumes, and models were created to give us the U.S.S. Enterprise NCC-1701-E, the sleek and beautiful consolation prize to the loss of her predecessor in the previous film. The Sovereign-class starship, designed by John Eaves, is beautifully streamlined and looks like she’s at warp standing still, yet she retains the design perceptions of the TNG-era Starfleet. (This would be the last Star Trek film to make use of a physical model for the ship’s exterior. Future films and other productions would rely on the ever-improving CGI technology.)

The film also takes the opportunity to upgrade the look of the Borg. Much like the updating of the look of the Klingons in The Motion Picture, the increase in budget from television to film allows the Borg to go from the relatively simple white makeup and back spandex with various plastic goodies attached to looking like true ‘bionic zombies’, which only serves to enhance their fearsomeness. With this suitably creepy new look, we also get our first look at the head of the hive-mind. Every hive must have a queen, and the writers give us our first (and so far, only) female Trek film antagonist, the Borg Queen. Played with seductive sadism by Alice Krige, the queen can get under Picard’s skin in a way that few antagonists do, having previously stripped him of all that he was during his assimilation. The writers employ a fascinating reversal of a rape victim facing their attacker, by having the victim be male and the attacker female. Now, she has her sights set on seducing Data into the collective via bringing him another step closer to humanity. Where the previous film gave Data emotions, this film gives him a physical sensation, allowing him to FEEL things for the first time and deal with many of the temptations of the pleasures of the flesh that we humans must deal with on a daily basis. 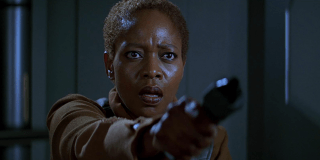 Refreshingly, Zefram Cochrane is far from the nobleman that 24th-century history books have made him out to be, and it’s fun to see both Reg Barclay (Dwight Shultz in a nice cameo) and Geordi succumb to their star-struck hero-worship of him. Riker feels some of this as well, but his impression of Cochrane is such that he might actually have been disappointed if Cochrane turned out to be a saint. And it’s also nice to see our heroes ultimately treat him as though he doesn’t have to be one of Gene Roddenberry’s perfectly awesome humans to fit in with his vision.

Lily Sloane (Alfre Woodard) also is a breath of fresh air, calling Picard out on his desire for revenge against the Borg. When Picard tries to be holier than thou and say they “have an evolved sensibility”, Lily calls those platitudes out for what they are: complete bull***t!

Star Trek provides us with our greatest hope for humanity by showing us that we DO have weaknesses and that we will strive to overcome them. Whenever it has tried to show us, humans who are without weaknesses or temptation, we’re only kidding ourselves. Without fear, weakness, and temptation, courage could not exist. And courage is exactly what Picard and Data show when they face down the queen in the centre of the hive in engineering, using the very same things that the queen tried to intimidate and/or seduce them with before, the fears and temptations brought on by flesh. The Borg are creatures of both flesh and machine and in “The Best of Both Worlds,” our heroes were able to beat them by accessing the machine; this time, they beat them through the flesh, Data ultimately resists the temptation and shatters the coolant tank that liquefies the queen’s organic components, and once the head of the snake is cut off, the body dies with it.

Meanwhile, Gene Roddenberry’s optimism is shown in full light as Picard and company bear witness to the first extra-terrestrial species that humankind meets: the Vulcans.

With Roddenberry’s optimism both challenged and winning out, the destruction of the Enterprise-E averted (which I was really happy about. As they set the auto-destruct for the new ship, I was thinking, “Jeez! They’re going through Enterprises like they’d go through SHOES!”), and the triumphant return of Jerry Goldsmith to the film series, First Contact proved to be a spectacular solo flight for our TNG heroes on the big screen.

Star Trek: First Contact gets a 9 on the one-to-ten scale. While there was a certain lack of originality in the title (there had already been a TNG episode by this name), it is appropriate for the story. It’s a shame that neither of the succeeding TNG films came close to this high-stakes adventure.