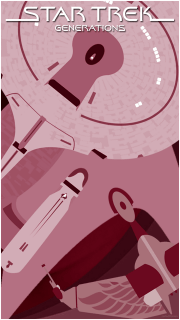 For me, Generations wound up being the feel-good film of 1994. While not generally regarded as a great Star Trek film, it was the right story for that point in my life and provided some welcome relief.

My early adulthood immediately following high school graduation was a very bitter and confused time. I had grown up on Air Force bases all of my life and had thought of actually serving in the Air Force myself as the closest real-life equivalent to being in Starfleet (a lot of my friends felt that way too). I was fully prepared to enlist right out of high school and go to college on the G.I. Bill to eventually get a commission and learn to fly. Unfortunately, fate had other plans for me. My heart murmur (which I was born with) became an issue and I was permanently disqualified from not only the Air Force, but also ANY branch of service. My dreams of following and even exceeding in my Dad’s footsteps were destroyed and my career was over before it even had a chance to start. Along the way in this devastation, I got into a bad relationship that made 1994 a very painful year for both of us.

My ex-girlfriend and I had parted ways about one month before the film’s premiere and lacking any life or career focus, the transition of our heroes from The Next Generation from the small screen to the big one was about the only thing I really had to look forward to. “All Good Things…” had proven to be a great finale for their TV adventures and had carried with it the promise of things to come on the silver screen. A lot of my friends were of the mentality of thought that went, “Boy, the original crew looked great in the movies! Imagine how cool the Next Generation movie will be!!”

Well, anyone with that mentality was probably in for a disappointment. Star Trek: The Motion Picture came ten years after TOS’s cancellation and with a big movie budget versus television of the 1960’s; it was pretty easy for the TOS movies to out-spectacle the show that spawned it. Not so with the TNG films. Generations went into pre-production before they had even filmed their last episode and started production immediately after the finale. By this time, we were now used to getting movie-quality production values and special effects on a weekly basis on television. TNG was not going to be out-spectacled so easily. For a TNG movie to really make an impact, even within the fanbase, they were going to need a big story; one that would finally once and for all pass the baton of space adventure from Kirk’s crew to Picard’s.

We could debate until the cows come home how well we got that. The meeting of Kirk and Picard, particularly on the big screen, should have been one of the great turning points of Star Trek history, but somehow it felt like this meeting could have been done just as well, if not better, as an episode of the show.

That being said, this story still works pretty well for me. Why? Because for all of the familiar elements that were already capitalized on so well on television, this is still the Next Generation that I had loved all through my teen years. I was actually grateful that they didn’t change too much because I thought that they were already nearly perfect just the way they were on TV. If it falls a little flat for a big screen adventure, I can still think of far worse ways to spend two hours in front of a screen.

As all of you were I’m sure, I too spent a lot of time contemplating the death of Captain James T. Kirk. This was a move that we saw coming from miles away. We knew that Kirk wasn’t around for the TNG era and we had heard Gene Roddenberry’s comments on how Kirk was most likely dead by TNG’s time. We had plenty of time to brace ourselves for it. In a lot of ways, Kirk’s death for me was indicative of how my life up to that point had ‘died’ and how I needed to move on. Many people were disappointed with the manner in which Kirk met his fate (bridge on the captain), but for me, that didn’t really matter. Kirk may not have had the spectacular last stand that so many fans craved, but he did die for a good cause, saving millions of people that he had never even met and making the difference one last time. And barring the presence of his new friend, Picard, he did indeed die very much alone (as he himself had prophesized in The Final Frontier) in a world that he was unfamiliar with but we the audience knew pretty well and would have loved to see him continue to thrive in. Still, as Q pointed out, all good things must come to an end- including the lives of our heroes- and I was grateful that Kirk’s death was not cheapened by a resurrection (at least not canonically). This was good enough for me.

Far more upsetting to me, however, was the destruction of the Enterprise-D. What few changes came to the TNG crew came in the form of slight enhancements of the ship. These included a more spectacular paint job for the ship’s exterior model (the same one that ILM had built for “Encounter at Farpoint” seven years earlier), additional stations on the bridge which helped it feel even bigger, and updated uniforms for some of our heroes to the DS9 black jumpsuits. The TNG Enterprise never looked lovelier and yet they decided to destroy her in her debut film! I felt that this was wrong. As our heroes stirred back up in the wake of the saucer crash, with Data looking around the wreckage of the bridge and Riker looking up at the shattered dome, I felt as though the house that we had been living in for the past seven years had burned down. This loss coming right on the heels of the news of the deaths of Picard’s brother and nephew would seem to me to be too much for him to recover from, especially after that wonderful scene where Picard breaks down over the loss of his nephew, whom he loved as a son.

But this, coupled with Picard’s recent realization of his mortality, helped to drive home what this film was really all about: how well we deal with loss. 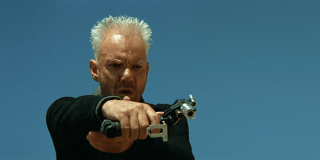 Here we have a villain named Soran (Malcolm McDowell), a man the same race as Guinan (whom we learn here are called the El-Aurians) who has been through the devastating loss of his family when the Borg destroyed their world. Adding to his devastation was an encounter with an energy ribbon that provides a doorway to a ‘place’ called The Nexus, where your dreams become reality and you can live them forever as time has no meaning there. This only reinforces Soran’s resolve to get back the bliss that was taken from him when the Enterprise-B rescues him from it, and almost eight decades later, shows no remorse for the millions of lives he will take just to get back his own bliss.

“Risk is part of the game.”

It isn’t the first time that Kirk told us that risk is what life is all about, but this is a message that does need to be reinforced. If we try to stay safe and snug in our comfort zone and never venture out experience new things, we start to die inside. Even if the things that happen to us when we take a risk wind up being not good, we cannot give over to the regret that we made a mistake. We’ve got to move on. As had been said before, he who tries to live only the ‘good’ parts of life ends up not living at all. This is why both Kirk and Picard give up the Nexus and why Data decides to live with the emotions that he painfully discovers are not easy to deal with.

So with all of this, the destruction of a ship that meant a lot to me, and death of beloved characters, why do I consider this to be a feel-good film?

For the same reason, I consider The Search for Spock to be one of my all-time favourite films when it saw the destruction of my favourite spaceship. It brings me comfort to know that my heroes struggle emotionally just as I do. That helps me realize that I’m not the only one in the world with broken dreams, in fact, I believe that most of us if not all have to live with not getting what we want out of life just as we all have to deal with the death of loved ones. And for all of Riker’s silly comments about how he plans to live forever, it’s also reinforced that we are indeed only mortal. Picard’s line that what we leave behind is not as important as how we’ve lived reminds us to never take any phase of our lives for granted, because he’s right, it will never come again. Kirk may be dead, but that’s okay because he actually preferred that to eternal bliss. At least he died making a difference and it was real! The Enterprise-D may be gone, but she took an entire threat to the security of the Federation (the Duras sisters) down with her. Again, not the worst way to go, and of course, there is always the hope of even better adventures down the road, which we did eventually get.

On the 1-to-10 scale, I rate Star Trek: Generations a 7. It may not be spectacular, but it does still have a way of making me feel good about my mortality.