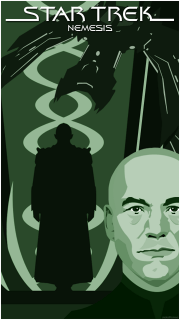 What can I say for the lowest-grossing Star Trek film in the franchise’s history; the only Star Trek film to not make Number 1 at the box office on its opening weekend as well as the film that effectively displaced Star Trek V: The Final Frontier as the worst Star Trek film ever and killed the TNG film series?

At the time of its release, I honestly didn’t have very much to say regarding Star Trek. Although I had temporarily returned to the fold during Enterprise‘s first season (and enjoyed it for the most part), the second season of that show churned out a lot of duds and I was feeling burned out. After the start of the Xindi arc, I stopped watching altogether (I would catch up on ENT’s superior 4th season later on with the DVD releases.)

Adding to the lack of enthusiasm for the tenth Star Trek feature was a dramatic shift in America’s cultural tastes away from science fiction in the wake of 9/11. Seeking an even greater escape from a world that was rapidly getting uncertain, audiences were offered J.R.R. Tolkien’s Middle Earth and Hogwarts school of Wizardry. Star Wars also continued to do well at the box office, but we had figured out by then that Star Wars wasn’t even science fiction at all. Rather, it was a sword-and-sorcery epic wrapped in sci-fi clothing, and in the wake of the first two Star Wars prequels, that was now more evident than ever before. There just wasn’t being much offered in the way of hard sci-fi anymore. No question, in the early 2000’s, sci-fi was out and fantasy was in.

But even that doesn’t offer much more than an excuse for Nemesis‘ failure at the box office. This is still a well-made film, but it takes more than just competent filmmaking skills to get people excited about the Next Generation cast’s last adventure on the big screen. The shift in our tastes to fantasy and my own lethargic mood about Star Trek could have been overcome with the right story. The Star Trek feature film series has been a beached whale twice before and both times the right story (The Wrath of Khan and The Undiscovered Country) brought it back from the brink. But while TWOK was a concentrated and sincere team effort, Nemesis only went through the same motions. 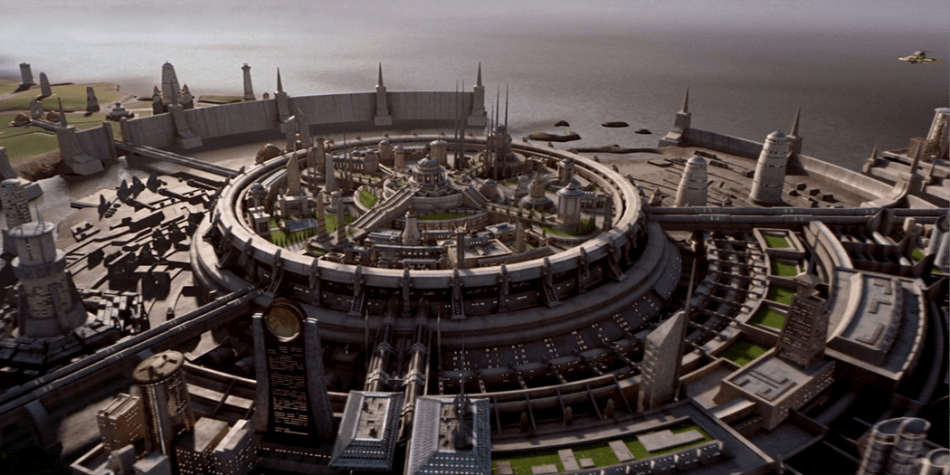 My principle criticism of the TNG movies in general and this film, in particular, is that they played it safe for the most part. Only First Contact seemed to have any real high stakes to it and truly seemed like an event film. I can only speculate that given the higher stakes of box office dollars in the feature film arena, producer Rick Berman, the man responsible for some of Trek‘s biggest accomplishments on the small screen, simply lost his willingness to take risks with the franchise on the big one.

This is a real shame. When going from television to movies, the stakes need to be higher than those of a two-part episode of television, not lower. On the other hand, however, one can understand the pressure to play it safe when studio heads are keeping a keen eye on your progress.

That said, however, I’m sure that Berman, even feeling as burned out on Trek as any of us were at that time, wanted as much as anyone to send the TNG cast out on a high note. The biggest and most fundamental mistake made was the decision to repeat an established formula of success. An even bigger mistake was choosing The Wrath of Khan as the template for that formula, both in the story and behind the scenes, especially when we’ve already had far too many Khan-wannabe villains, each with their own cosmic weapons of mass destruction.

The film’s themes? Why, dealing with ageing, a revenge-obsessed villain, the death of a beloved character, and moving on, of course! After all, that’s what worked before, right? Surely, Trek audiences will respond to the TNG cast having their own Wrath of Khan, right?

Well…sure. Except us pretty much ALREADY HAD that with First Contact. And the best thing about that film, it wasn’t even TRYING to mimic TWOK’s success. It was just telling its own story.

Perhaps even more disheartening than mimicking TWOK’s story is the attempt to mimic the formula behind the scenes. After all, one of the things TWOK always gets praised for is how it was done largely by people who had never done anything with Star Trek before. So for Berman, the approach was clear: bring in a new writer and director who would be indifferent to the franchise and just tell a good story. 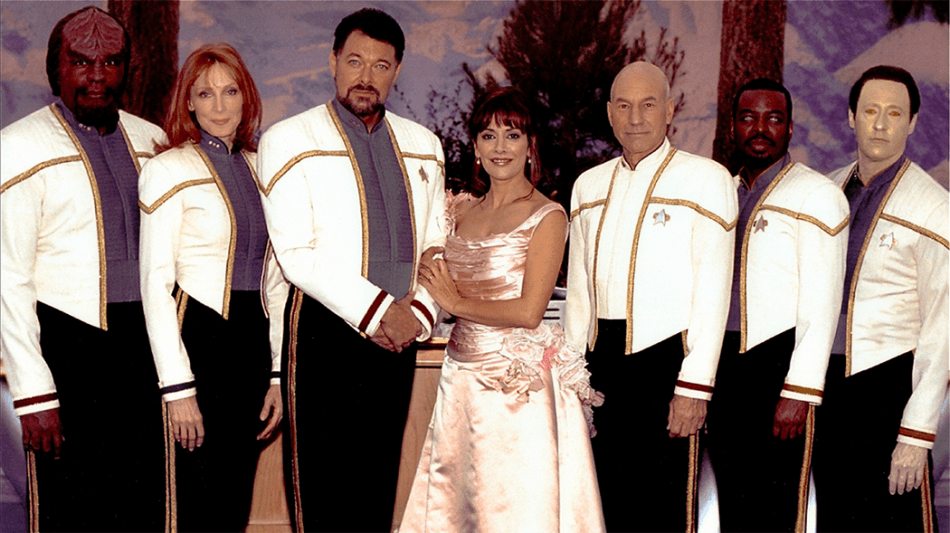 That approach pretty much backfired on him. The writer hired was John Logan, a friend of Brent Spiner’s who was best known for writing the Ridley Scott hit film Gladiator. Logan, however, was a Trek fan himself and hardly indifferent about the franchise. Apparently, he always wanted to do a Star Trek film and paid a lot of fan service, resulting in a film that feels like it was written by a fan for fans. Now, this has both its good and bad points. The good point is that we fans do appreciate writers who are faithful to the faithful, but the bad point is that it has virtually NO mainstream appeal.

The director chosen was Stuart Baird. Best known for his work as an editor on films such as Superman: The Movie and Lara Croft: Tomb Raider, Baird had moved up to directing in the mid-’90’s. He is a competent enough director, but SO impartial to Star Trek that he clearly didn’t care much about it at all. This is probably best demonstrated in his relationship with the cast, with whom he apparently didn’t even TRY to befriend. (Referring to LeVar Burton repeatedly as “Laverne” in particular shows a lack of respect.) From what I understand, Nemesis was to him just another project to get through and move on to the next one he had for Paramount.

No Star Trek film has ever proven unwatchable to me, however, and I would like to spend a little time here to discuss the things that I DID like about this film:

First, I like that Riker and Deanna finally tied the knot; it seemed only right. I liked seeing Wesley Crusher again, and in a Starfleet uniform, indicating that he did eventually come back to the academy after a tour with the Traveler in “Journey’s End”. I like that Beverly has more to do in this film, as she’s been badly underused in the last three. I like Guinan’s cameo. I like the Romulans getting their day in the Trek movie spotlight. I like the idea of the Remans as a slave class in a revolt. And I like that our heroes are put through an emotional turmoil from which they must overcome.

However, I don’t like the film’s villain. Shinzon (Tom Hardy) comes off as a Khan-wannabe when there are two scenes that show he could have been something more. I don’t like Data being killed off or hinted at a resurrection (within B-4) just because it’s all part of the “Wrath of Khan formula.” And I don’t like the film ending on such a melancholy note, especially for their final film. No audience cheering at the Scimitar‘s destruction, no cast signoff at the end with a triumphant score as the TOS cast got in The Undiscovered Country…just bittersweet feelings and emptiness. Hardly an epic worth the TNG cast’s final outing. Part of me feels that it would have been better if they had just left it at “All Good Things…”, where they DID get an exit with style. (Of course, I don’t really mean that.)

On a scale of 1 to 10, I rate Nemesis a 5. While it is watchable and has some nice moments, I’m still saddened to this day that the TNG cast, who had such a winning run on television, go out with a subdued whisper instead of a bang.

Three years later, Star Trek: Enterprise would be cancelled and the Rick Berman era would come to an end and sadly, he would be reviled for it. I personally don’t think that’s right. Whichever way Berman’s tenure may have ended, there was a time when he truly knew how to manage risk. During TNG’s and DS9’s runs, he hired true greats like Michael Piller, Ron Moore, Bannon Braga, Jeri Taylor, and Ira Steven Behr and let them do some of the greatest storytelling Trek ever saw. I look back at “The Best of Both Worlds”, “Chain of Command”, “The Maquis”, “Homefront/Paradise Lost”, the finales of both of those shows as well as First Contact, and I see how the franchise realized great gains by Berman allowing great risks with the characters and Gene Roddenberry’s vision. And that’s how I prefer to remember the Rick Berman era. I wish him only goodwill and a happy retirement.