The original Star Trek television series, largely ignored by primetime audiences during its original three-season run on NBC from 1966 to 1969, found unprecedented popularity in syndication during the ’70s on its journey to becoming both a successful commercial franchise and a part of American pop culture. Decades before it became politically correct to celebrate diversity, Gene Roddenberry, Star Trek’s creator, had the audacity to feature two Americans, an Oriental, a Scotsman, a Russian, a Swahili and even a green-blooded, pointy-eared extraterrestrial in his multi-ethnic, interracial and poly-national cast — something unheard of in 1966 (compare, for example, the diversity found on Gilligan’s Island). Even more amazing, in an era when American television was largely dominated by toothless drivel, Star Trek often explored contemporary issues such as racial prejudice, sexism, overpopulation and the horrors of war. But despite being lauded for its integrated cast and socially relevant stories, the one topic even Star Trek dared not broach was homosexuality.

Star Trek: The Next Generation, also created by Roddenberry, premiered in 1987 in a much more socially progressive decade and, during the course of its seven-season run, attempted to address such issues as same-sex relationships and genderism. But to the dismay of its gay fans, the series failed to handle either subject satisfactorily.

In the fourth-season episode “The Host” (1991), Dr Beverly Crusher becomes romantically involved with the male host body of a symbiont race (one lifeform living inside another in a symbiotic existence). When that host body is fatally injured, the large, genderless, sluglike creature that lives inside it is surgically transferred to a new, female host body. Although the new host possesses all the same personality traits, characteristics, memories and romantic interests of the previous host — in effect: same person, different body — Dr Crusher, horrified, rejects her advances and terminates the relationship. What could have been a tender tale about true love overcoming catastrophic difficulty turns out to be a story confirming that what you look like is more important than who you are, and gay fans hoping for a sensitive portrayal of a same-sex relationship are sorely disappointed.

In the fifth-season episode “The Outcast” (1992), Commander Will Riker becomes romantically involved with a member of a naturally androgynous race who belongs to a very small and extremely ostracized minority that yearns to possess gender. After a brief tryst, the object of Riker’s affection is captured and put on trial for crimes against nature, where it gives a moving testimony about personal liberties, the rights of the individual and matters of the heart. Nevertheless, the defendant is ultimately found guilty and then lobotomized to cure the illness. What could have been a tender tale about self-discovery, acceptance and tolerance turns out to be a story confirming that how society perceives you is more important than how you perceive yourself, and again, gay fans hoping for a sensitive portrayal of a sexual minority are sorely disappointed.

Star Trek: Deep Space Nine, which premiered in 1993, made a couple of stabs at gay-friendly episodes with mixed success. Revisiting on numerous occasions the original Star Trek’s old “Mirror, Mirror” alternate universe (1967) where Starfleet was a savage empire and Spock sported a sexy goatee, Major Kira Nerys’ modern-day counterpart is a deliciously wicked and decidedly bisexual slave driver who runs the space station with a cruel fist and cold heart. These alternate universe episodes (“Crossover,” “Through the Looking Glass,” “Shattered Mirror,” 1994-96) are the closest that any Trek series has yet come to featuring an openly gay character, but they are ultimately unsatisfying because they simply reinforce the old cliché of the stereotypical “evil lesbian.”

No episode of any Trek series caught the media’s attention more so than Deep Space Nine’s fourth-season episode “Rejoined” (1995), in which Lieutenant Jadzia Dax, a member of that same symbiont race which caused Dr. Beverly Crusher such anguish in “The Host,” meets the current female host body of the wife of one of her own earlier male host bodies. Despite both symbionts now having different host bodies, their mutual attraction has survived and (to the delight of straight men everywhere) their love is consummated in a passionate same-sex kiss that caused the episode to be broadcast with a viewer discretion disclaimer in Atlanta and preempted altogether in Birmingham. While not the first same-sex kiss on American television (L. A. Law did it in 1991 and Roseanne smooched Mariel Hemingway in 1994), it was a historic first for Star Trek, on par with Captain Kirk’s kissing the very black and very beautiful Lieutenant Uhura in the 1968 episode,”Plato’s Stepchildren” — American television’s first interracial kiss. But, predictably, the two women parted ways at the end of the episode, leaving Lt. Dax distraught and brokenhearted.

Star Trek’s most recent incarnation, Enterprise, recently took its own stab at what it surely must have believed was a sensitive portrayal of sexual discrimination — but just as it has so many times before, it completely missed the mark. In the second-season episode “Stigma” (2003), Vulcan Sub-Commander T’Pol is diagnosed with “Pa’nar Syndrome,” a deadly and incurable disease that can only be transmitted during a mind-meld (a practice first demonstrated by Spock in the 1966 first-season Star Trek episode “Dagger of the Mind”). Only a small minority of Vulcans have the ability to initiate a mind-meld (although anyone can be a passive recipient), a practice considered unnatural, and those who possess and use that ability are (in what we always thought was a society devoted to pure logic) persecuted and ostracized. Not every mind-meld results in an “infection,” but T’Pol, the victim of a telepathic rape, does develop the disease. Fearing the loss of her rank and position aboard the Enterprise, T’Pol at first (illogically) refuses to seek medical treatment, but once her secret is predictably exposed, she is forced to confront the (surprising) bigotry and prejudice of her superiors in Vulcan society.

Just in case anyone missed the heavy-handed, almost brutal analogy, a short public service announcement at the end of the episode bludgeoned the viewer with phone numbers to call for more information about HIV/AIDS. “Stigma” was part of UPN’s night-long partnership with the Henry J. Kaiser Family Foundation for a media campaign to educate people about HIV/AIDS. While I would like to commend UPN and series creators/executive producers/scriptwriters Rick Berman and Brannon Braga for tackling these difficult issues, the episode simply reinforces and perpetuates the “stigma” of HIV/AIDS as a “gay disease” (while simultaneously contradicting 37 years of Trek lore by spinning Vulcan mind-melds as a bad thing).

T’Pol didn’t come down with some Vulcan form of cancer, or diabetes, or smallpox, or tuberculosis — not some infectious disease that is terrible on its own merits but politically innocuous in its transmission — no, she gets a disease reviled more for who gets it and how than for its debilitating symptoms and incurability. “Stigma” could have been a compelling story about facing adversity in spite of infection, not because of it. Instead, UPN and its parent, Paramount Pictures, once again chose to slap Star Trek’s gay fans in the face with a story that portrays mind-melders not as an important and valuable segment of Vulcan society, but as an undesirable, unnatural minority victimized by prejudice and bigotry. The message is abundantly clear.

With current television series like Will & Grace, Six Feet Under and Queer as Folk featuring leading gay characters and literally dozens of other programs including gay supporting characters — to say nothing of the obligatory token gay member of virtually every new “reality” series — Star Trek is long overdue to include at least one prominent gay character in its lead cast, with accompanying storylines that are sensitive, inclusive and non-prejudicial.

This is a republication of a article that appeared on www.thebody.com in 2003 – it has been published with the autorisation of Eric L. Watts 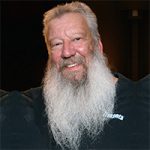 Eric L. Watts has been active in Star Trek fandom for over forty years and is one of the most well-known Star Trek fans in the southeastern United States. He is the founder and chairman of Treklanta, the annual Star Trek convention in Atlanta, Georgia, and “Commanding Officer” of the USS Republic NCC-1371, the chapter of STARFLEET International in Atlanta. He was the first and original Director of Star Trek Programming at Dragon*Con and is the creator, producer and host of the Miss Klingon Empire Beauty Pageant and the Bjo Awards. Mr. Watts also played Korgoth the Klingon in three episodes of the Star Trek fan film series Project: Potemkin.

“My Journey From Fan To Fan Film Actor”