“On Stardate 48315.6, the U.S.S. Voyager was transported beyond our control, 70,000 light years across the galaxy to the Delta Quadrant. There, without aid from Starfleet, we began our 70-year journey home. In our numerous encounters, we came into contact with many dangerous and violent species. Having a limited crew with no chance of reinforcements, we determined that we needed a specialized team to handle the more dangerous situations. Tuvok, Voyager’s Chief of Security assembled an elite force of security personnel named the Hazard Team.”

The opening dialogue to Activision and Raven Software’s Star Trek Voyager: Elite Force video game. A game that received critical acclaim when it was initially released in 2000 on PC. The game later went to receive both an expansion pack, PlayStation 2 export, and a sequel in 2003. 17 years later, the game stands as the most successful Star Trek games created.

Roughly two weeks ago, I was sitting in front of my PC listening to a collection of Star Trek music that I’ve saved over the years, which included the main theme to Elite Force.

Which in turn prompted me to locate my copy of Elite Force and began playing it. While the game has certainly aged in comparison to modern graphics, the gameplay itself remains some of the best. Challenging combat, with stealth mechanics, and even some minor puzzles that need to be solved. The voice acting is phenomenal in the sense that ALL  of the cast behind Star Trek Voyager was along for the ride. UNFORTUNATELY, the game suffers from two problems in today’s age. First, it’s 17 years old and some modern systems cannot run the program. Secondly, where is the re-master?

The second question is one that has been overly asked in my mind more times than I can count. So, how do you combat this question? Well, simple, I put my 4 years of Game Design Schooling to work! I have played around with the Unreal Development Kit when I was still attending college, however, even that program is considered out of date now, so I instead opted to download Epic Games’ Unreal Engine 4 and have been actively working on ‘modernizing’ Elite Force, at least it’s environments. I actively use a Student version of 3ds Max and Photoshop to recreate the environments. Please keep in mind, this is a PRE-ALPHA Build. Meaning that some of the assets that I am using are subject to change, updates, or even replacement.

While I cannot claim that I am a professional by any means, I treat Star Trek as a passion and began work on the central location you spend your ‘between missions’ time in. Deck 4, Hazard Operations. 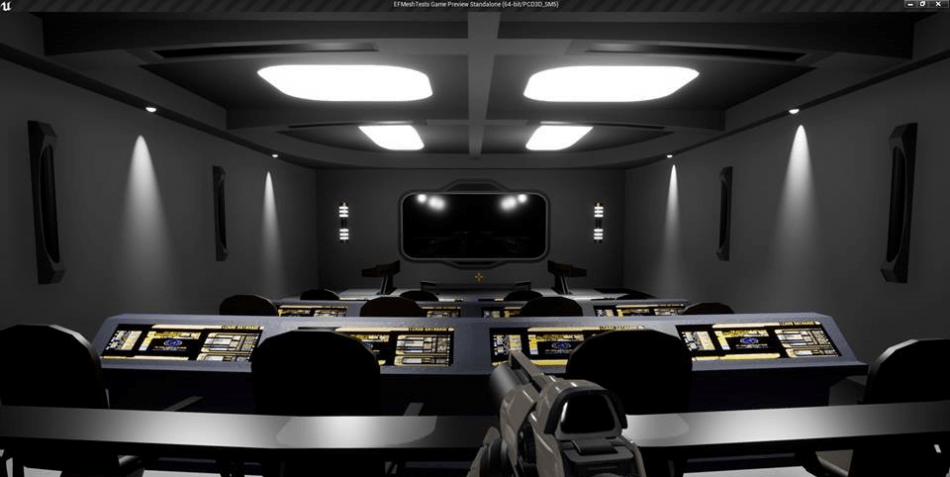 Using gameplay, screenshots, and my own exploration, I recreated the hallways first, this way I can space out and design the appropriate rooms adjourning the halls. The hallways themselves took a little time to create as I had already created them twice before in practice. After that, I moved to the largest room on Deck 4, the Briefing Room this room proved to be a bit of a challenge due to its size and the lighting. However, after nearly 4 hours of work, I had the room completed. Afterwards, I realized I had an issue, I didn’t know how to get the doors to open and close during play. Thanks to a YouTube tutorial I managed to adapt the technique’s to fit Voyager’s style. And now, all of the doors work AND sound like they are supposed to.

The Locker Room was next and this room is where the majority of my time has been spent over the last week, Creating the assets in this room proved to be much more challenging because I had initially made the room too small. I had to go back and tweak the length of the hallway to accommodate this issue. Once I had completed the changes I proceeded to decorate the room and found that it had several walls that seemed devoid of any kind of life and set out to take some creative license and add a few replicators and objects to make the room feel more fleshed out. The room is not completely finished as I need to return to the coding aspect and create a series of controls that will open and close the large lockers the Hazard Team use. As well as create the individual nameplates identifying which Locker belongs to who.

At this time I’ve begun work on the Armory. Unfortunately, it is bare bones and not worthy of a screenshot but I plan on releasing several in the coming days. I have many more environments to complete, such as the Bridge, Engineering, Shuttlebay, Sickbay, and Cargo Bay 2, and that’s just for Voyager! I still have to create the interiors for a Borg Cube, The Scavenger Base (Klingon, TOS Federation hybrid), and several alien ships. It’s going to be a long journey. But a journey worth taking. As stated before, this is a passion project and unfortunately, I do not at this time know how to extract any of the old data for use in the re-master. Such as the music and speech files for use in-game and currently is an environmental reproduction.

I’ll end with that I am eager to continue work and should anyone wish, I would welcome assistance from character modellers animators, texture artists, and coders. While it is unlikely the game will receive an official update, all work will be continued free of charge and those assisting with the project will receive credit for their work.

Until then, keep an eye on Trek Fan Productions for more update blogs and my personal Facebook for periodic posts about the work being done.