Last night Discovery killed off another Captain, this time though not was all as it seemed, we now know that Captain Gabriel Lorca (Jason Isaacs) was not the Lorca we all thought he was. In the last moments of episode 12 “Vaunted Ambition,” we saw Burnham (Sonequa Martin-Green) put all the pieces together and realise that her Lorca was in fact from the Mirror Universe.

All the way through this season, we have been given little hints that many until recently (fan theories aside) just brushed aside as nothing more than Isaacs portrayal of a Captain during wartime. But the clues were there all along, for example, his flagrant disregard for Starfleet protocol, his lair of dead animals and weapons, the fact he sent Admiral Cornwell on a mission he knew she might not walk away from, and the fact he had a curious protective nature towards Burnham.

Nevertheless, all these modest clues came to a head, with the reveal.

This brings us to episode 13 “What’s past is Prologue” in this episode (which personally is one of the best Star Trek episodes I have seen to date) we see Lorca gain the upper hand against the Emperor and take over the I.S.S. Charon, with the help of a familiar face in the form of Cmdr. Landry (Rekha Sharma), although this victory was short lived.

At the end of this stunningly directed episode, and in what can only be called a tremendously choreographed final showdown between Lorca and Georgiou we see the story of Captain Gabriel Lorca come to an end with a sword through his chest, and to make it even more finite he is then disintegrated into a million pieces by mycelium spores.

However there are some questions left unanswered,

In a series of interviews, the man behind the mirror mask clarifies a few things and also kind of shoots down hopes for his return for season two.

Covering the topic of was this planned all along or a sudden last-minute shock death Jason Isaacs had this to say,

While speaking to inverse.com, he was asked

How he feels about being part of the huge legacy of Star Trek,

Issacs was quick to state “not anymore”

He’s “relieved” that his Star Trek journey is over, despite good memories of the cast and crew

Issacs also took the opportunity to explain what drew him to the role in the first place,

“I wouldn’t have said to yes to just ‘being a Captain’ in the abstract,”

“I also knew it wasn’t going to be like any Star Trek captain that had come before. I knew the whole story. It gave me something juicy and fun and very secretive to play with. I feel an enormous relief now that I don’t have to lie anymore. Not just to journalists and the public, which is horrible, but also to my friends, my family, everybody. Only my closest circle knew I was going to die and it was going to be over and that I was from the Mirror World. I felt like the shackles are off now.”

Expanding upon his rationale for taking the role, in an interview with Entertainment Weekly he added,

“I knew before I took the job. It was pitched to me that he was from the Mirror world. I said, “What’s he doing here? How did he get here? What does he want? And how’s he going to go about achieving those things?” And at first they went, “We’re not really sure, it could be one of 20 different things.” And I blinked slightly and I said, “I’m not sure I want to do the job if I don’t know exactly what he’s after, because then I won’t be able to act!” Then we had a bunch of discussions and came up with a plan which we pretty much stuck to all the way through. Then it was not just easy, but a joy, because I had that lovely thing that actors always love, and the camera likes, and that’s that I had secrets.”

Further, in his interview with IGN, he explained he was apart of the discussions that took place before the camera even rolled,

“I couldn’t do my job very well and I didn’t wanna play the part unless we would all figure those things out. And they said absolutely, we agree to be a part of the discussion. So there were a number of times before we started shooting that we sat and said, well, it could be this, it could be that, it could be the other. But once we settled on what he was after, at least, that stayed the same. And they changed… you know, stories were being written all the time, pages were being delivered on the day. But, no, it was always gonna end up with me, Michelle [Yeoh] and Sonequa [Martin-Green] in a room, knocking seven shades of s#!t out of each other.”

As far as signing for the long haul which is a Trek tradition, when he spoke to Buzzfeed Jason said:

“It’s been embarrassing/awkward/torturous lying to so many people, including close friends and family members, but particularly to the press, and indirectly to the public,”

“But Star Trek fans particularly are incredibly smart and highly attuned to every nuance in the story. So you just couldn’t give them a clue.”

And over in the interview with IGN,

“People … are always asking,” he said, “how do you feel signing up for seven years for something, and what it’s gonna be like being on the ship forever? And you’ll be known as this for a long time, and I’m thinking, I’m dead in three weeks! So that’s been an odd feeling. Even people in Toronto [where the show shoots] around me who I’ve become friendly with … who assume I’m gonna be visiting, coming back for six months every year, and I couldn’t tell anybody. I felt slightly ashamed.”

So Jason knew this was not a long gig from the get-go and that Captain Lorca always had an expiration date, so that’s 1 question answered so what about the other 2, Where is Prime Lorca and Is Mirror Lorca really! dead

Well scouring these interviews again Jason provides the answers to both, during the EW interview Jason, talks Prime Lorca and how he wound up in the Prime Universe,

“There was a Prime Lorca, he was captain of the Buran in the Prime world. He swapped with him and found himself captain of the Buran. This never came out, this backstory detail we never put in the dialogue: Although Lorca spins this story having had to sacrifice the men on Buran and had to blow them up to save them from Klingon torture.

Actually, if I remember correctly, there was some kind of DNA identification that would have exposed Lorca as not being Prime Lorca, and so he blew up the ship and killed everyone on it.”

A bit vague so what else has Jason said, in the IGN interview he speculated upon Primes fate,

“We don’t know anything about the fate of Prime Lorca. Is he as interesting as Mirror Lorca? What is his taste in fashion? Does he wear leather coats, does he wear puffy-sleeve shirts, does he have a goatee, does he blow-dry his hair? Who knows? We know nothing.

Or is he that different? Frankly, I mean, how different are any of us from the Mirror version of ourselves? They say we’re all five meals away from being savages. This particular administration in America has brought some of the ugliest parts of human nature out from in the shadows.

And who knows what other exposures the Mirror world might have done. Who knows where he is.”

However, during one scene in this weeks episode, the fate of Prime Lorca was kind of sealed when, it was explained that while on a mission to secure allies, coming under fire from the I.S.S. Charon, the Buran entered an Ion storm too evade, and in doing so the transporter signals of Prime/Mirror Lorca were swapped so Prime Lorca ended up in the Mirror Universe, so although it is not! Set in stone as to the fate of his Prime counterpart, it is pretty much hinted that he dies when the Buran was destroyed.

So OK that’s 2 questions answered but, as we all know no one in Trek is truly dead, as in some shape or form they always come back, akin to how we all thought Tasha Yar died and then in the space of 2 years we find ourselves face to face with her daughter, who happened to look a lot like her, so when asked if Mirror Lorca is dead for real and not coming back, Jason was very clear in his answers, or was he,

EW: “I would say, yeah, the prognosis is not good for him given he was dissolved into a million pieces on camera. There are not many homeopathic cures that can help that.”

And then there is his tweet in reply to Matt Mira from After Trek, 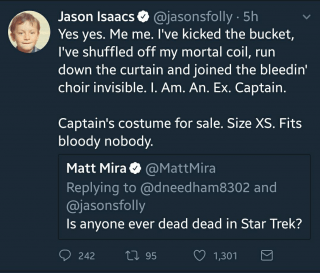 On the other hand, there might be light at the end of the tunnel, maybe, when asked by Buzzfeed, his answer was less than straight,

“So while Lorca’s body is now well and gone, could he possibly return in some other form?”

“If you’re asking if I come back at all,” Isaacs said with a chuckle, “you’ll have to get in line behind my wife and kids, who I won’t tell either.”

“Here’s the context: I’ve lied to all of the press constantly since the very first day I got this job. So why would you believe anything I say now?”

So, while we might! have seen the last of Captain Lorca we have all grown to love or hate, depending on how you feel not only about him, but the series as a whole, there is one undeniable fact, Jason Issacs has firmly cemented his legacy as one of the captains of Star Trek.

Although fret not, Jason still has some duties to perform before he hangs up his Captains pips for good, Jason will be attending

Personally, I will miss not only Lorca, but Jason too, he has been a breath of fresh air not only to Discovery, but also to Star Trek.