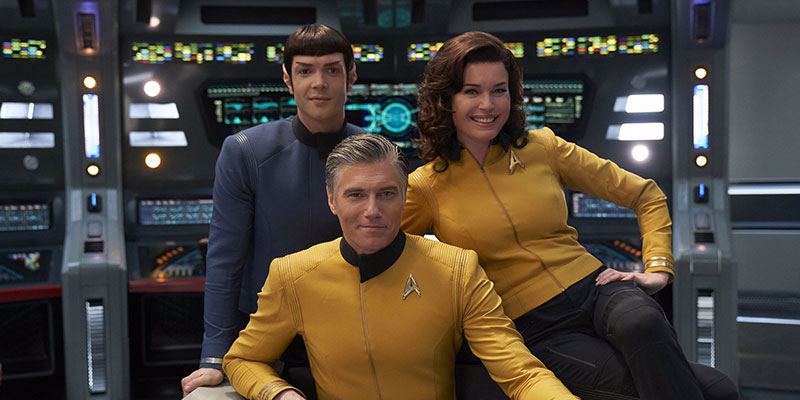 391 days, that is how long fans have been waiting… And today the news finally broke that Anson Mount, Ethan Peck and Rebecca Romijn are set to return to the bridge of the Enterprise once more.

Today CBS All Access has given a straight-to-series order for Star Trek: Discovery spinoff Star Trek: Strange New Worlds and after the success of Discovery season 2 this comes as no surprise, their portal of these iconic characters has gone down in Star Trek history as some of the best bits of Trek ever.

Star Trek: Strange New Worlds will see the return of fan favourites, Captain Christopher Pike, Spock and Number One, as they explore strange new worlds and seek out new life. The series will explore the decade leading up when the Iconic James T Kirk took command of the Enterprise and most notably explore how Pike will handle the knowledge of his impending destiny as he found out in the Discovery season 2 episode “Through the Valley of Shadows“.

Like all new Star Trek series for CBS All Access, Alex Kurtzman will oversee the production and the series premiere was written by Akiva Goldsman, with Kurtzman and Jenny Lumet collaborating on the story. The trio will exec produce alongside Henry Alonso Myers, Heather Kadin, Rod Roddenberry and Trevor Roth. Aaron Baiers, Akela Cooper and Davy Perez co-exec produce. even though Goldsmith will play a very pivotal role in Strange New Worlds, he will also stay on as executive producer of Star Tre: Picards sophomore season.

When we said we heard the fans’ outpouring of love for Pike, Number One and Spock when they boarded Star Trek: Discovery last season, we meant it,

These iconic characters have a deep history in Star Trek canon, yet so much of their stories has yet to be told. With Akiva and Henry at the helm, the Enterprise, its crew and its fans are in for an extraordinary journey to new frontiers in the Star Trek universe.

his is a dream come true, literally,” Goldsman said. “I have imagined myself on the bridge of the Enterprise since the early 1970s. I’m honored to be a part of this continuing journey along with Alex, Henry and the fine folks at CBS.

And shortly after the announcement, the stars of the show had this to say… “Hit It”

Strange New Worlds joins, Discovery, Picard and the long-awaited Section 31 show becoming the fourth live-action series being made and the sixth new Star Trek show with Lower Decks and the CG-animated series also in development for CBS All Access, all six will be executively produced by Kurtzman’s production company Secret Hideout under his deal, with ViacomCBS and Roddenberry Entertainment.

One big bit of information is that ViacomCBS will handle worldwide distribution for Strange New Worlds which means that it might premiere on CBS All Access in some form internationally as currently with the exception of the USA all the new shows have been disrupted by either, CTV Sci-Fi Channel (SpaceTV) in Canada or globally by Netflix or Amazon Prime. ViacomCBS has been looking to expand CBS All Access globally for some time now so it makes sense that they might use this show to launch their streaming platform worldwide much as they did with Discovery in the USA.

With the news being so fresh, the date for Strange New Worlds premiere as well as an episode count have yet to be set, but we expect it to air sometime late 2021, possibly early 2022.

But before then, the new season of Discovery will debut later this year after being delayed due to the ongoing pandemic that has meant all this seasons post production is being carried out at home.