So is Lt Tyler a Human POW or is he Voq in disguise?

The answer is not as simple as you may think, in episode 5, we were introduced to the character of Ash Tyler, when Captain Lorca was abducted and taken prisoner by L’Rell, and he is thrown in the same cell as both Tyler and Mudd.

When we meet Tyler he has been a prisoner of L’Rell for the last seven months, when quizzed by Lorca, Tyler identifies himself as a former crewman of the U.S.S. Yeager which was destroyed at the Battle of the Binary Stars, and that he has been a prisoner for seven months. After watching this episode and how it seems that no one could possibly last that amount of time (Mudd not included as we find out why he has managed this, as he has been feeding info to L’Rell) we are left wondering if Ash’s claims could be false.

Casting our minds back to the end of episode 4, after being betrayed by L’Rell (or so it seemed) Voq was exiled to the stricken U.S.S. Shenzhou by Kol, as Kol wanted the sarcophagus ship for himself and getting rid of Voq was a necessity, just as the episode is drawing to a close we see L’Rell beam aboard the Shenzhou and talk to Voq, in this exchange L’Rell says to him she has a plan, and in reply Voq asks what must he sacrifice? “Everything” is her reply.

With Shazad Latif originally slated to play a Klingon, before he “won” his role as Tyler, it has a lot of fans wondering is there a connection? is Lt. Tyler’s story false? which is let’s face it full of holes you could fly a shuttle through, adding together the fact a lot of things just do not add up. Seven months and still alive, L’Rell has taken a “shine” to him, one big thing a lot of people are pointing out is, Tyler is played by Shazad Latif while Voq is credited as played by Javid Iqbal. According to Memory Alpha (a great source for all things Trek), Shazad Latif’s real name is Shazad Khaliq Iqbal while a quick check of IMDB shows that Javid Iqbal mysteriously has no other acting credits besides Voq on Discovery is, in fact, Ash Tyler a surgically altered Voq? All of these speculations very easily and credibly lead to the possibility that Tyler is actually Voq masquerading as a Starfleet POW.

After all, during his torture, L’Rell told Lorca she was descended from spies – she is from House Mo’Kai, known as “watchers,” “deceivers,” and “weavers of lies” among the Klingon Empire.

More importantly, let us not forget, this tactic has been used before by the Klingons, when Arne Darvin was discovered as a double agent in the episode “The Trouble with Tribbles”.

Could Tyler be Starfleet or could he be Voq? Only time will tell as we get deeper into the series. 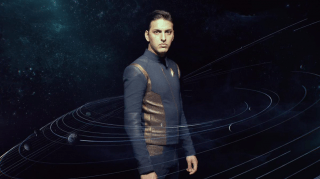 The Ideals of “Star Trek” to Feature in Human Rights Lectures