In an article today on the UK based site “Digital Spy”, Shazad Latif teased

“You keep the audience on tenterhooks. You never know. You want to build these relationships with these characters, and it just makes it all the more heartbreaking when they go. I mean, yeah, I think you’re never safe.” 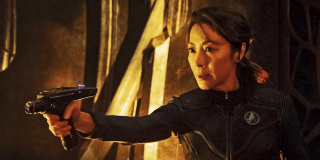 So what does this mean for the crew of the latest Star Trek series is anybody’s guess, it could mean we lose one or more of our favourite cast members before the season wraps, I mean we have already lost Captain Georgiou (Michelle Yeoh) in the second episode “Battle of the Binary Stars” so it is possible we could be on the way to losing more. If you do not already know the fate of Captian Georgiou you can read about it > HERE < just be warned it is not nice.

This Sunday/Monday’s episode of Discovery titled ” Choose your Pain” is the first time we meet the character of Lt. Ash Tyler, and although nothing is known about this character yet! there is certainly some talk in the Discovery groups on Facebook about who he could be or rather, the term “Wolf in Sheep’s Clothing” is a fan favourite at the moment, some fans have been speculating that Lt Tyler may not be completely the way he appears to when we first meet him.

Originally slated to appear as one of the new Klingons, Shazad was recast as Lt Tyler.

Watch the trailer for “Choose Your Pain” Below

DST2019 Lineup Gets Better By The Week

Star Trek: Pike?? Is A Pike Series On Its Way?