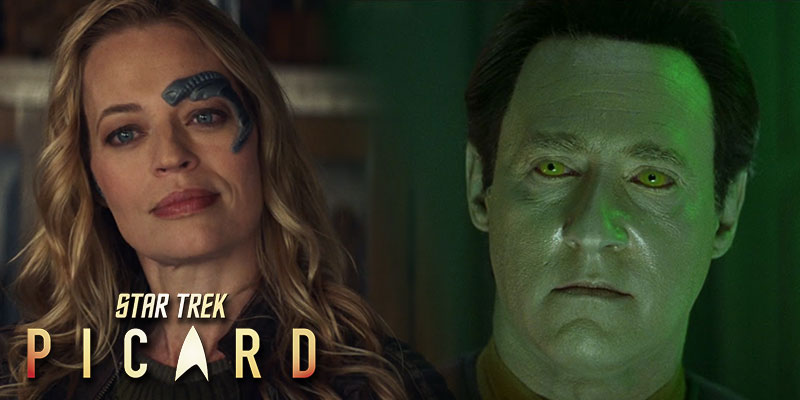 This past weekend at Television Critics Association winter press tour lots of news and snippets were released as to what we should expect from the return of Picard.

Speaking to IGN, Jeri Ryan who is set to return as Seven of Nine explained why Seven is not exactly one of Picard biggest fans and blames both him and Starfleet for the state of the galaxy

“Seven not on the oh he is a god bandwagon, They have seen a lot of dark crap, in the last 20 years both of them [looking at Jonathan Del Arco who was also present during the interview]

Seven I think holds Starfleet and the Federation in large part responsible for much of it, The universe is a mess and I think she initially sees Picard as a representation of that. She’s been working, I think I am allowed to say… with sort of a group of freedom fighters called the Fenris Rangers who are trying to keep some semblance of order in the mess that is the galaxy.”

While we are not sure who the “Fenris Rangers” are you can get a hint from the trailers released that they aren’t exactly an organisation that Starfleet would sanction, however, it is worth noting that Picard will turn to either this group or a group like them to help him complete his mission of saving the Galaxy.

With Picard set to feature the first time both Picard (Stewart) and Seven (Ryan) have appeared on screen together, they do have something in common, they have both been assimilated by the Borg and forced to commit untold atrocities in the name of the collective.

Ryan went on to say this about their first meeting in the new show:

“This is the first time that Seven and Picard actually meet,”

“They know each other by reputation. And as I’ve said before, Seven’s not on the ‘Oh, he’s a god’ bandwagon I think initially when she meets him because she holds him partially responsible for what Starfleet has done in her view.”

In the same interview, Alex Kurtzman was asked why they chose to cast Seven in Picard, he had this to say:

“We had a rule on the show which was that we did not want to just bring back legacy characters to bring them back,”

“They had to come back because the story could not tell itself without those characters. There were two things that came to mind immediately with Picard. When you think of Picard you think of his relationship with Data and you think of the Borg. … Seven and Picard have never been onscreen together before. So that was a really interesting opportunity, and what they share, even though they’ve never spoken, is they were both assimilated by the Borg. So they would obviously both be haunted by that element of their lives. We certainly know that both of them have been individually, and now what does it mean for them to see that in each other. Is it too painful? Is it a little like staring into the sun? Is it comforting? Those are really interesting questions to ask.”

You can watch the interview HERE

Spiner’s Conditions On Returning As Data

In another interview, Brent Spiner who is famously known for playing the one and only Lt Cmdr Data, had his own set of conditions upon returning to the Star Trek franchise.

Speaking to SyFy Wire, Spiner made it clear that one thing he did not want to do was undermine Data’s sacrifice at the end of Nemesis, which meant he would only take on the role if it meant that Data stayed dead and was not resurrected or his death retconned.

“It was definitely important that we didn’t do anything that would undermine anything that had been done before. But I think when you see the whole season…I can’t say anything else,”

Also in the interview, Spiner went on to praise not only the team behind Picard but also the cast as well

“The producers and writers of the show are incredible [and] really brilliant,”

“There was Patrick, which was a huge draw because I love Patrick and I love working with him … It was strange and wonderful and just curious. I remember when we shot the first scene in the show, the very first shot, and we were sitting across from each other, going, ‘Can you believe this?’”

You can read the full interview HERE