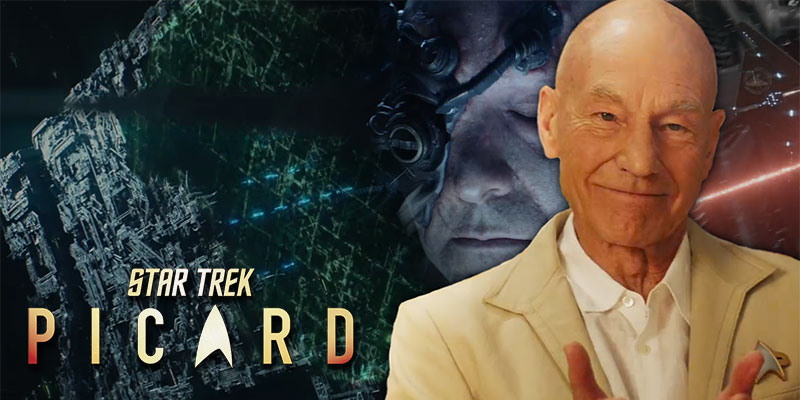 Today CBS officially announced an early renewal for Star Trek: Picard ahead of its debut in two weeks time.

Earlier this month we reported that Picard had been renewed for a second due to it being awarded a record amount of tax breaks, but until today there had been no official announcement.

During the service’s biannual Television Critics Association presentation, Julie McNamara, Executive VP of original content for CBS All Access reaffirmed this news with confirmation of its renewal.

Of its renewal Julie said:

“The energy and excitement around the premiere of STAR TREK: PICARD has reached a magnitude greater than all of us at CBS All Access could have hoped for,”

“We’re thrilled to announce plans for a second season before the series’ debut, and we are confident that ‘Star Trek’ fans and new viewers alike will be captured by the stellar cast and creative team’s meticulously crafted story when it premieres on Jan. 23.”

This is sure to excite and please many fans who have been overwhelmed since Sir Patrick Stewart announced that he was set to return.

Matalas has a wide range of experience in TV from working on shows like 12 Monkeys (2015), Terra Nova (2011) and Nikita (2010) and he is no stranger to Trek as he co-authored Star Trek the Next Generation: Hive along with non-other than Brannon Braga.

Along with the news that Picard has been renewed for a sophomore season, it was also announced that Trek veteran and Trek icon Wil Wheaton will take over hosting of the Trek after show “The Ready Room”.

The last series of “The Ready Room” broadcasted live from Star Trek’ official Facebook page, so unless this is set to change expect them to follow the same format as before.

Watch it every Thursday after you watch each episode of Picard for a deep dive into the latest episode, and expect some long await reunions…

This past week there has been a lot of talk about Discovery being renewed for a fourth season, however, even with “Production Weekly” (a well-known trade publication) having Discovery season four listed for active casting, there has been no official word yet on CBS All Access’ flagship show being renewed.

Season three is scheduled for release this year, and although there is no set date as of yet, Discovery’ lead Sonequa Martin-Green hinted in a recent interview that we might be seeing the show land in late spring to early summer.

Watch The Picard Season One Trailer

Star Trek Discovery season three will air later this year on CBS All Access in the USA, CTV SCi-Fi/Crave TV in Canada and will be released on Netflix Internationally.

No Character Is Safe – SPOILERS