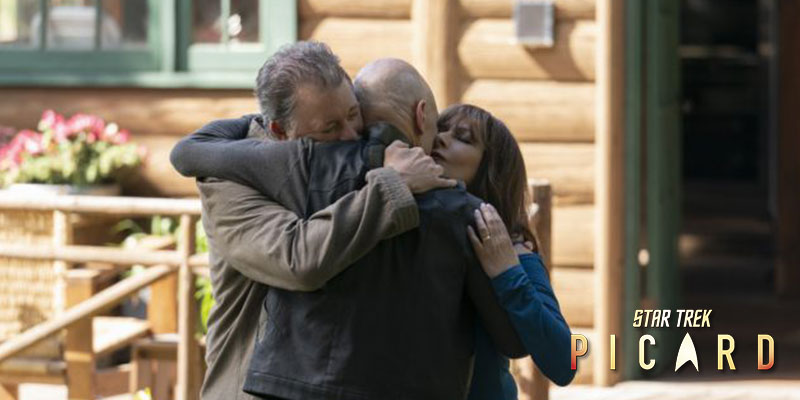 Will Riker (Jonathan Frakes) And Deanna Troi (Marina Sirtis) return in one of the most emotionally charged episodes of this season.

We are now firmly in the second half of Picard season one and after last weeks emotional episode ‘The Impossible Box’ which saw Picard (Patrick Stewart) realise he had not fully recovered from his assimilation, this weeks episode continues the emotional mood with Jean-Luc seeking help from some old friends while he contemplates his next move.

At the end of last weeks episode, we saw Soji (Iso Briones) and Picard using the Sikarian Spatial Trajector to escape and head to Nepenthe the home of former shipmates Riker and Troi, upon arriving on Nepenthe we are introduced to Kestra Troi Riker (LuLu Wilson) the daughter of Will and Deanna (named after Deanna’s deceased older sister TNG Dark Page) who guides the pair to refuge.

While Picard and Soji are on Nepenthe, Elnor (Evan Evagora) still on the captured Borg cube and separated from the La Sirena, teams up with Hugh (Jonathan Del Arco) to confront an angry Narissa (Peyton List). meanwhile Rios (Santiago Cabrera) and the crew of the La Sirena battle to free themselves from being held in a tractor beam.

This episode also delves deeper into the motives of Jurati (Alison Pill) and why she decided to kill Maddox.

Picard and Soji transport to the planet Nepenthe, home to some old and trusted friends. As the rest of the La Sirena crew attempt to join them, Picard helps Soji make sense of her recently unlocked memories. Meanwhile, Hugh and Elnor are left on the Borg cube and must face an angered Narissa.

The episode was written by Samantha Humphrey and Michael Chabon, and was directed by Doug Aarniokoski.

Watch the trailer for ‘Nepenthe’