As much as we want it, I doubt anyone reading this will ever venture into space. We can certainly wish it and if we have a lazy quarter million dollars lying around, Mr Branson may oblige ….eventually.

Nope, call me a pessimist, but I think the chances of me or anyone else riding a PanAm Starliner to the great revolving white cartwheel in high Earth orbit a la 2001: A Space Odyssey, in my lifetime is remote, to say the least. I hope for my grandchildren to have that option, however.

Born, as I was, at the dawn of manned spaceflight, I wished like much of my generation to venture starward and fulfil our destiny at warp speed. (See how I brought in that Star Trek reference…smooth huh?) This is why we had the plethora of “space” sci-fi shows in the 60s and 70s, it was about the travelling into space. The adventures we had out there was just the cream on top!
Surprisingly though, here we sit, almost 50 years after Neil Armstrong and Buzz Aldrin stopped the world in its tracks, still waiting for the (insert airline name here) Starliner and that city in the sky that Kubrick promised us.

Fortunately, that is changing and as Mr Musk showed us last month, there’s more than one way to launch a sports car into an elongated heliocentric orbit! One thing that has progressed however is technology and here, in the early 21st Century, we now have amazing computing power at our beck and call, courtesy of the continued miniaturization of its componentry and the ability of the masses to access vast amounts of information on almost any subject via the World Wide Interweb. For the first time common garden-variety slobs like you and me can actually create something that can “touch Space” Thus was the stage set for your humble author to watch a TV show called “Man Lab” by British presenter James May back in the Australian autumn of 2012 where some guys got together and launched a camera high into the atmosphere via a balloon and brought back pictures of earth and space like you now see regularly on Youtube and Facebook from the International Space Station.

Both awestruck and inspired, I immediately set about researching the possibilities of doing this. Launching something from Earth to the actual edge of space and retrieving it! Knowing I would get only one chance at this, I aimed for the maximum height possible, 100,000 ft/ 35 kilometres …..straight up.

What is commonly termed “the edge of space”.

I can tell you now that If I knew it would take me almost two years to do it..I might not have persisted. But I put out the call and I gathered a core of like-minded friends around me and we set out to do this. Thus was born Project Altjira and we learnt a lot.

You don’t just blow up a balloon and set it off, you need to learn about the capabilities of the balloon, its expansion rate, (it expands as it ascends because of the decreasing ambient air pressure), the rate-of-climb v the amount of gas v the weight of the payload v the desired height objective. Hydrogen gives you better value for money for these but it’s strictly controlled in Australia in the quantities we wanted (like umm..TANKS of it!) Not to mention the sheer danger of working with such an inflammable gas (Google the Hindenburg!) So after some false starts and a decision to go with Helium plus a gradual understanding of how to do what we wanted to do, we actually started to make some headway. But how were we to access the video, track the whole thing, manage the recovery, and find a launch site and more importantly, a recovery zone? (I had nightmares about this thing gently descending into a major intersection of a country town and the ensuing havoc.)
The mechanics of what we worked out is this: You have a balloon of the required size at the top/head of the rig, tied to the bottom of the balloon about a metre below via a rotatable shackle is a parachute assembly, tied to the base of that about two metres below on another shackle is the payload, another metre below that a radar reflector and trailing below that is another two metres of high-gain aerial.

You inflate the balloon and as soon as possible release it, making sure to switch on all the equipment within the payload, the whole thing ascends to its maximum height where the balloon, unable to expand any further explodes and the remaining equipment begins its descent. When the atmosphere is thick enough the parachute deploys and the whole thing then floats gently to the ground to be recovered. I ended up sourcing through E-Bay two 1200 gram U.S Army spec 100% latex weather balloons, 50 metres of USAF military grade paracord that we triple braided and a specialised built-for-purpose rip-stop nylon parachute assembly that could deploy at a maximum of Mach 1.5. A Go-Pro Black camera was used with a 32Gb SD card as well as two camping hand warmers to keep the internal temp above zero and an onboard Arduino computer and transmitter.

I wanted to use hollow polystyrene foam spheres to house the camera and radio transmitter that would relay telemetry to us such as height, outside temp and position. Polystyrene is light, a very good thermal insulator and easily cut to suit. And a sphere would be less subject to gusts of wind than a square box. Incredibly the only place in the world I could source there was a factory in England that would not deal with anyone outside the U.K!  Fortunately at that time I worked for a company with its head office in Britain and they were able to get me two and ship them to me.

I don’t know what it’s like in other countries but in Australia, the Civil Aviation Safety Authority has a dim view of you launching stuff through their controlled airspace. There are rules to be obeyed, permits to be paid, special clearances to be obtained and waiting to be done…lots of waiting.

CASA was actually lots of help in the end as they put me in touch with the station manager of the Australian Bureau of Meteorology at Mildura in the top North West corner of Victoria, where I live (again…Google it!) It turned out this was where the BoM used to launch their weather balloons before getting all techno with satellites and such. They still had the permission to do so and so we were good to go!

So in November of 2013, my friends and I launched Project Altjira spaceward. Named after the Australian indigenous people’s Dreamtime god that created the heaven and the earth and then went to live in the sky, the product of all our hard work soared up into a clear blue sky. 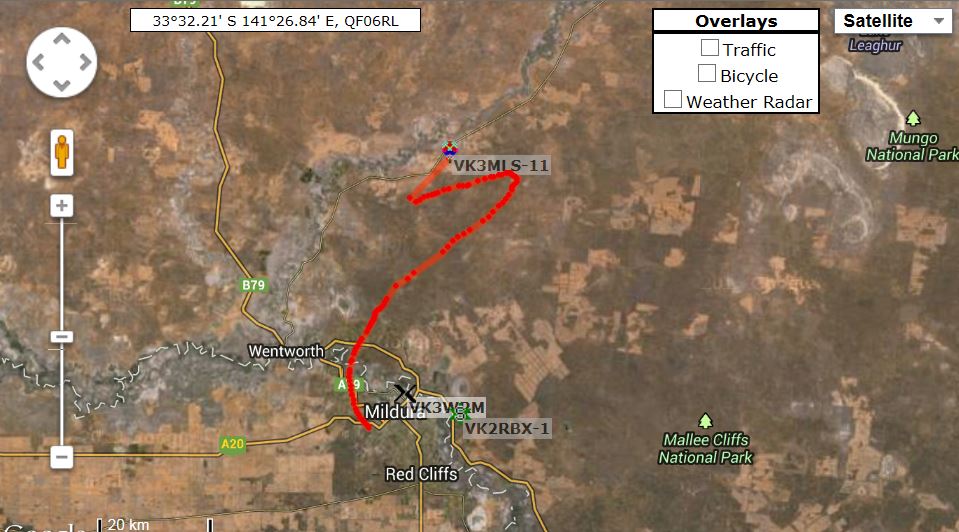 If you have ever dreamed of  Space, seeing it, being in it, watch our Youtube video. I made it from our GoPro footage. Be amazed as you see our planet below, the thin blue line of atmosphere that gives us life and the big bad blackness of Space beyond.

No CGI, no special effects…just some cool music.

Try to avoid fast-forwarding through it…give 20 minutes of your life to see it unfold. I gave it almost 2 years!

I hope you get the same tingle……..looking at Space, the final frontier.

MARS in sight: Prepare to Land!