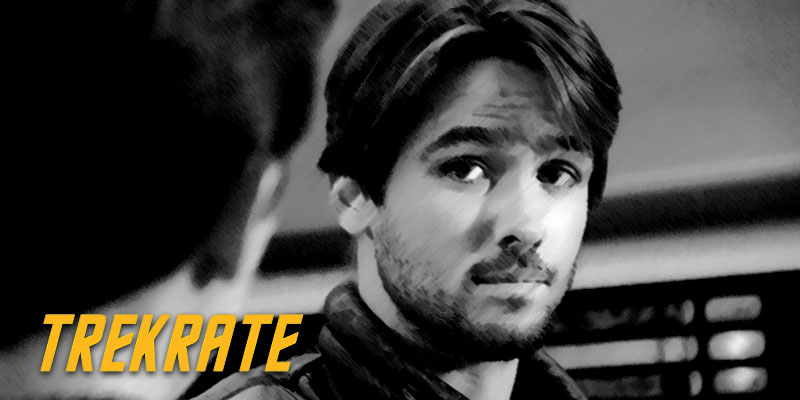 Welcome to another episode on TrekRate a format where I either chose an episode or take a requested one and rate it from 1 to 10. 1 being the lowest and 10 the highest score.

Today we are taking a look at a requested one. ‘The Outrageous Okona‘ This is the fourth episode of the second season of The Next Generation and the request came from TriAngulum Audio Studios a fellow YouTuber and friend. Go ahead and visit his channel.

The episode aired on December 12th 1988 and was directed by Robert Becker.

It is stardate 42402.7 and the Enterprise travels in the Omega Sagitta system. While travelling the system they encounter a class 9 starship that has only one life sign aboard. The sole occupant is Captain Thadiun Okona and his ship has issues with its guidance system. Deanna Troi using her mental abilities determines that he is a suspicious person. Okona gets beamed aboard the Enterprise and meets Riker, Data, Worf and Crusher also transporter chief Lt. Robinson who he immediately gets interested in him by displaying his charming characteristics…

After a short while, Okona leaves the transporter room together with Data and Wesley Crusher in order to get to main engineering to observe how the repairs on Okona’s guidance systems are proceeding. Okona meanwhile is fascinated by Data and finds the concept of an emotionless android fascinating. He leaves to pay Robinson a visit.

Data inspired by Okona’s questions and insights about humour goes to ten forward and seeks Guinans advice. He then goes to the holodeck to check out a holographic comedy show. After getting some inspiration he goes to Guinan and tries his new jokes which fail. He gets interrupted by a call to the Bridge, since a ship is approaching the Enterprise. Locking their lasers on the Enterprise….LASERS HAHAHAHAAHAHAHAH. Riker notes that according to Starfleet regulations they have to go on yellow alert. Picard also orders to drop main shields in case well they want to surrender. As always they try to hail them, however, they don’t answer and decide to hail the Enterprise instead. Immediately telling the crew that they have no rights in this system and want to board them….phaaahahahahahahahhah….

Picard being the wise men he acknowledges that the point that they are in their solar system is valid order to open a channel. During a conversation, they figure that Okona is a criminal but they are not getting any intel on which crimes he has committed. Another ship approaches and their occupants demand the same to get Okona. Picard orders Okona to the bridge he, however, is going around the ship making out with different female crew members. Worf probably at this point wants to hit him in the face however that won’t be necessary.

On the bridge, Picard meets Okona and begins to interrogate him. Okona denying all. When Picard asks Debin, the captain of the first ship, what Okona did, he tells him, that he impregnated his daughter.

Kushell of the second ship claims that Okona stole the Jewel of Thesia, which was a national treasure. Whilst discussing the situation with Okona it becomes quite clear to Picard that handing him over to one of them will always result in war and the best thing to do is to let Okona fly away with his ship to find a place of refuge.

However he decides to make a stand since he is tired about the whole situation.

Okona’s decision to turn himself in willingly gives Picard the possibility to use the Enterprise as a neutral meeting ground. During the discussion aboard the Enterprise, it becomes clear that not Okona but actually Kushell`s son Benzan impregnated Debin´s daughter Yana and that Okona served as a go-between because a relationship between those two would not be approved by their families giving us a Romeo and Juliet type of situation. The Jewel also was stolen to be used as a wedding gift between Yanar and Benzan. Both agree to the marriage and their fathers only have one choice left. To continue their little fights a bight more light-hearted… this time about the wedding. Since the whole situation has turned into an internal matter Picard invokes the Prime directive.

Meanwhile, Data and Guinan take part in a comedy show on the holodeck in order to solve Datas ability to make a good Joke by giving him an audience. The audience, unfortunately, is programmed to laugh at anything he says or does. Guinan then tells Data that the ability to laugh is not the final result to becoming human. To this Data replies that there is nothing more uniquely Human.

Personally I really do enjoy to watch this episode. It shows us clearly that you can have a great story without the need for battle or constant danger… NO there was no danger coming from the other ships. The Okona plot twist we get at the end of the episode really had me by surprise when I first saw this episode.

Overall this episode is probably one of my favourites when it comes to Star Trek Episodes. Not only because of that but also its interesting story and fantastic acting I´d like to give this episode…

Let me know in the comment section below how you would rate the episode and don’t forget to like this video if you enjoyed it. If you are new to my channel maybe consider subbing and if you want to support me consider becoming a channel Patreon.

With all that said stay healthy and safe, GermanTrekkie out.

Truth OR Myth? Janeway, Hero OR Villain? A Second Look…