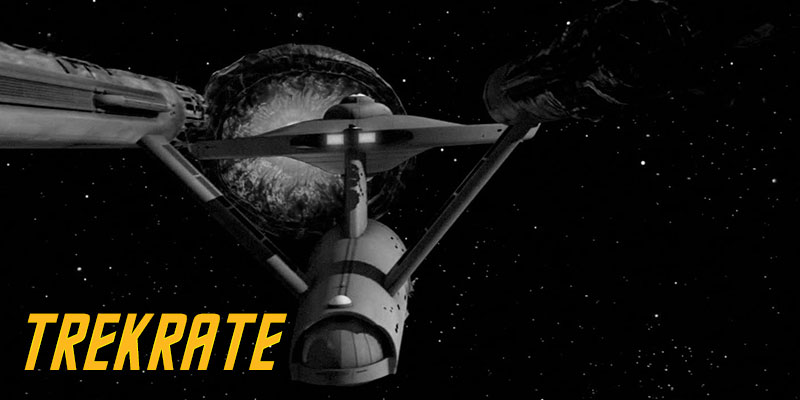 Welcome to a new video on TrekRate. A format where I either choose a Star Trek Episode or take a requested one and rate it from 1 to 10. 1 being the lowest and 10 the highest score. This format is not supposed to bash against any Star Trek show. It’s here in order to recap Star Trek as a whole and maybe even inspire people to rewatch some of the episodes. In today’s video, we are going to take a look at “The Doomsday Machine”, which is the sixth episode of the second season. It was written by Norman Spinrad and directed by Marc Daniels and first aired on 20th of October 1967. The episode got a remastered version on February 10th 2007.

The U.S.S. Enterprise receives a faint distress signal which was apparently sent by a ships disaster beacon. Due to subspace interference, they only figure out that the ship’s name is Constellation and contacting Starfleet Command to inform them about the situation is not possible as well. So the Enterprise travels to the L-370 system and finds that all seven planets are gone. Proceeding to the next system L-374 they find the same thing. All planets have gone only debris flying around.

In the L-374 system, they also found the Enterprise’s sister ship the U.S.S. Constellation which was commanded by Commodore Matt Decker and is now a powerless wreck which seemingly was abandoned. Since there is no evidence of the destruction occurring naturally Kirk assumes that they have been attacked and orders to go on Red Alert.

After scanning the Constellation, it becomes apparent that the ship is running with minimal life support, utilizing the ships reserve banks. Whilst all of its power plants are dead and the bridge uninhabitable. Further scans are prevented by subspace interference as well as communications. No ships are detected close by and the Enterprise stands down red alert switching to yellow alert.

In order to investigate Kirk puts together an away team that consists out of Dr McCoy, Montgomery Scott and a damage control team. Spock meanwhile stays in command of the Enterprise.

They beam aboard on one of the Constellations corridors and start their investigation. Whilst Scott and his team examine engineering the find out that the Constellations warp engines are completely destroyed, its impulse engines heavily damaged and the phase banks completely exhausted indicating that the Ship was in a battle that it lost big time.

Kirk and McCoy examine the rest of the ship and find no signs of any of the crew or bodies. They theorize that the crew might have been beamed down to one of the planets but Spock tells them that none of these planets could sustain Human life. Scotty suggests after giving a report about the Ships condition, that they should playback the Captain’s log in hope of finding more evidence. In the auxiliary control room, they find Commodore Decker in very bad shape. After McCoy gives him an injection with his hypospray Decker recognizes Kirk. Scotty begins playing back the log:

“Captain’s log, stardate 4202.1. Exceptionally heavy subspace interference still prevents us from contacting Starfleet to inform them of the destroyed solar systems we have encountered. We are now entering system L-374. Science Officer Masada reports the fourth planet seems to be breaking up. We are going to investigate.”

Decker who is still in shock begins to remember what happened and Kirk orders the sensor tapes being beamed aboard the Enterprise for analysis. Decker tells them that he decided to beam his crew to the surface as he was unable to contact Starfleet. As Captain, he stayed behind till everybody left the ship. However, the Constellation was attacked again and the Transporters were disabled. After being asked to describe the attacker Decker told Kirk that something “right out of hell” destroyed the third planet killing all of the Crew.

Washburn one of Scottie’s engineering team reports that the ships antimatter stores have been deactivated. Hearing this Kirk asks Scott if an energy dampening field could be the reason for that. Further description of the “Planet Killer” reveals that it is extremely huge and impossible to tell whether its a ship or an organism. Also, Spock and Sulu find out that it probably came from outside the Galaxy and is on its way to a heavily populated region of the milky way.

After Bones and Decker beam to the Enterprise, the ship is on condition red. The Planet Killer has returned.

Whilst Decker wants to pursue and attack The Planet Killer Spock wants to retrieve the remaining crew on the Constellation. However, Decker assumes command of the Enterprise under General Order 104, Section B, Paragraph 1a, assuring Spock that he will succeed in attacking and destroying The Planet Killer. Spock points out that The Planet Killer’s hull is made out of solid neutronium and is impervious to an attack from a single ship. Decker arguments that if Spock won’t comply, he will relieve him of duty and Spock has no choice but to follow his orders.

Since McCoy is the only one who could prevent Decker form fully assuming command of the Constellation, he orders him to go to the sickbay and the rest of the crew to prepare for battle and pursue the Doomsday Machine.

Fighting against The Planet Killer results in the Enterprise being heavily damaged and captured by a tractor beam pulling it inside.

Meanwhile, Scotty managed to partially repair the impulse engines of the Constellation, providing basic manoeuvrability. They start pursuing the Enterprise and The Planet Killer and fire on the weapon after Scotty managed to get the Phasers online. This caused the device to release the Enterprise and approach the Constellation. This gave Decker what he wanted. A second ship to attack The Planet Killer. However, Spock points out that it can create a defensive sphere that attacks any energy source.

The Enterprise’s warp drive is disabled as are coms and transporters. After restoring the ship to ship communication and hearing Decker instead of Spock also finding out what he had done Kirk calls him a lunatic for attacking the device. Decker allows Spock to give Kirk a report and Kirk orders Spock to relieve Decker of duty. However, it becomes necessary to arrest him. After another confrontation with Spock, Decker finally surrenders command.

Spock orders Decker to sickbay and assigns a security officer to escort him however Decker overpowers him and sneaks down to the shuttle bay. Decker pilots it towards The Planet Killer, telling Spock that he wants to pilot it “right down its throat”. Which he does.

Decker’s death was completely obsolete and useless since he did nothing to the device. Kirk, however, comes up with a plan to destroy The Doomsday device by flying the Constellation into it and overloading its impulse engines. He orders Scotty to rig up a thirty-second delay detonation device and begins flying the Constellation towards The Planet Killer getting beamed out at the last moment, destroying the device. After getting back on the Bridge Kirk points out that they have destroyed this Doomsday Device with a form of H-Bomb which was a Doomsday Device in the 20th century.

This episode is definitely one of the best TOS episodes giving us an interesting and intense story to follow. It introduces the concept of planet destroyers to Star Trek without much expositioning on those. The Doomsday Device never fully reveals the intention of the Device and those who have built it. It keeps it mysterious and therefore a bit scary. The storytelling of this episode makes it easy to follow. However, the episode would have been better as a two-parter. Like best of both worlds.

Make sure to let me know your opinion and rating on this episode. Also, let me know what next episode you would like me to go through.

With all that said hope you guys enjoyed and make sure to stay healthy GermanTrekkie out.