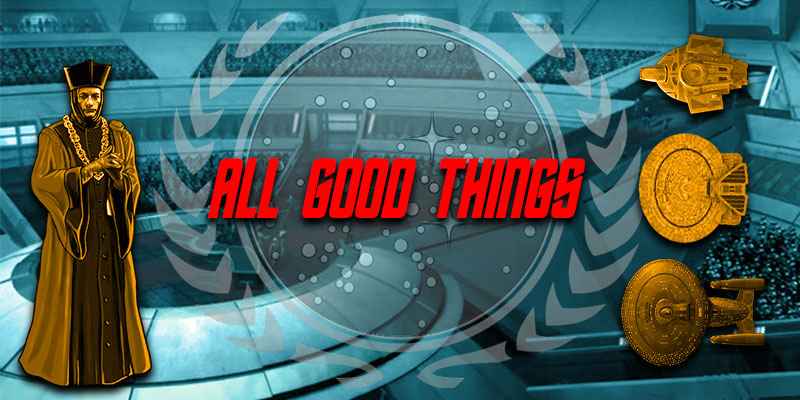 When the previous generation has defeated gods When rival empires have been reduced to a third world power or are dependant on your foreign policy and have even gone into seclusion. Tell me, who will tell you the line will be drawn here, that you will only go so far and no further.  Let us find out.

In the early days of the latter half of the 24th Century, the federation had reached a level of prosperity that no other Empire had achieved.  Where others like the Romulans used violence as well as slavery to increase their territory and Totalitarianism to maintain it.  The Klingons at least for a time made their gains through conquest and fear, unfortunately, their empire was constantly is disarray with every house betraying the other to gain the controlling seat.

The Cardassians after losing the Border Wars were reduced to a third rate power.

The Federation for the last 80 years had over 180 worlds as members, sharing resources and wealth, adding diverse ideas from a variety of races, The Alpha Quadrant was their oyster.

In fact, life was so good in this new Utopia that even artificial beings without even being fully deemed as sentient would not only gain equal rights but citizenship too. But are the rights of artificial beings a product of prosperity or morality? Well, that’s a subject for a future episode.

This new golden age was achieved via exploration, scientific endeavours, Diplomacy and Ingenuity. In order to boost their newfound prosperity, Starfleet would commission a new class of Starship.  This, of course, would be the Galaxy-class.

The Galaxy-class would utilise upgraded technologies and designs pioneered by both the Nebula and The New Orleans Class. Unlike the New Orleans class, the Galaxy didn’t have giant Stabilo pens glued to its hull.  Yeah, that happened. For more on Starship breakdowns, I highly recommend you visit Tri Angulum audio studios and Junkball media because they are just totally awesome.

Anyway back to it. Six of these new Juggernauts would be constructed one of which being the federation flagship the U.S.S. Enterprise NCC 1701-D the sixth ship to bear the Name. Having already expanded their territory as far as they had the flagship would continue its mandate to boldly go where no man has gone before and sought out new life and new civilisations. At least that was the idea.

An omnipotent being known only as Q from a continuum of beings who act as the self-anointed guardians of the galaxy would halt the Enterprise D whilst on its way to Farpoint station with an energy barrier.

Claiming humanity had not yet evolved beyond their baser instincts and called them a savage child race, Q would put the crew of this new ship and its Captain along with the rest of humanity on trial for the crimes of previous generations.

With no choice Captain Picard would plead guilty to the charges brought before the court however he would challenge Q to tri humanity again from the present onwards and oh boy would they get more than they bargained for. Yes, I ended the sentence with a preposition, sue me.

It wouldn’t be too long before Q would bring the challenge to Picard’s front door.  Once again Q would tri humanity by introducing them to the Borg.   Convinced that humanity had become arrogant and complacent as a by-product of the Federations new Utopia like state that they were not ready for what awaited them beyond their own borders.

Even when Q offered his services as a guide, willing to renounce his powers his assertion of humanity was correct as Picard would tell him that the Enterprise and its crew was more than ready to encounter any and everything that would await them and Q’s services were not required.

It would only take a snap of his fingers to hurtle the Enterprise to the farthest reaches of the Beta Quadrant where in short order they would receive a swift kick in their complacency.  When not long after their arrival in that region of space they would encounter a new foe for the first time. The Borg.

Utilising the best technologies Starfleet had endowed the Enterprise, the Borg would make the Galaxy-class seem like the NX-01 by comparison as not only were they able to compromise their shields and attempt to corrupt the systems they would carve out several decks killing 18 members of the crew.  Even when the Enterprise would attempt to flee, the Borg would drain their shields and render the firepower of this new Enterprise useless.

Having no alternative action to take, humbly Picard would have no choice but to admit that he needs Q.  Admitting that Humanity had become stagnant via the current status quo of the Federation.

Even after the Enterprise and its crew had been returned tot he Alpha Quadrant and had reported their encounter with the Borg, Starfleet Command would prove Q’s point by failing to prepare for any future encounters.  Believing the Borg would need at least 2 years to reach Federation Space.   Of course, the heads of sheds at Starfleet command would treat the Borg threat with the same concern as they would the Romulans or the Klingons.   Even with some minor upgrades to the Enterprise and the rest of the fleet much of which was comprised of ships that were designed and built in the 23rd Century were still in service.

Unfortunately for Starfleet and the Federation, The Borg would arrive in one year and this time Q’s point would be hit home, HARD.

After losing contact with the Colony New Providence on Jouret 4 Starfleet would realise the Borg had returned.    The Enterprise would be ordered to delay the Borg for as long as possible so Admiral Hanson could assemble a fleet large enough to engage the Borg at Wolf 359.  Of course, who could assume with what little was known of the Borg that they would have an alternative plan other than simply just assimilating what technology the entire Federation had to offer?

Their first target was Captain Picard himself. After a game of cat and mouse lasting several days, the Borg would eventually infiltrate the Enterprise and take Picard against his will, with resistance being futile Picard would be assimilated.  Gaining all of his knowledge of the Starfleet capabilities and Defences the Borg would make its way to sector 001 with the Enterprise having to give up the chase due to its inability to maintain warp 9.5 longer than 12 hours.

Admiral Hanson with 40 ships at his command would intercept the Borg only for their attack to be futile as 39 ships would be destroyed along with a death count of 11,000.  This would be the largest loss of life Starfleet had seen since the conflict with the Romulans.   The Enterprise and its crew would eventually rescue Picard and Destroy the Borg cube.

However this time Starfleet would not procrastinate in the construction of a new line of ships specifically designed to combat the Borg, such as the Akira class, The Intrepid, The Sovereign, The Prometheus and not forgetting the Defiant-class which was designed by a survivor of the battle of Wolf 359.  Captain Benjamin Sisko.

Although this encounter with the Borg did not end with the destruction of the domination over the federation, the damage tot he fleet and the death toll did corrupt the Federation relieving them of their hubris.

Although its prosperity was still intact, Starfleet Command would adopt a new mentality which opposes the strive for a brighter and more hopeful future.

With a new fleet being constructed can the current fleet significantly weaker after the battle of wolf 359, can Starfleet maintain the values and standards, the ethics and morality of the federation.

Would another devastating battle with a formidable force lead Starfleet to abandon everything that allowed them to flourish?  Are darker days drawing near?

Find out in the next time, here in the Continuum.

If you wish to be notified of future videos then hit the bell icon and by all means, share my videos and leave a comment below.

Watch my latest video below

Truth OR Myth – Romulan Starships – The Romulan Bird Of Prey