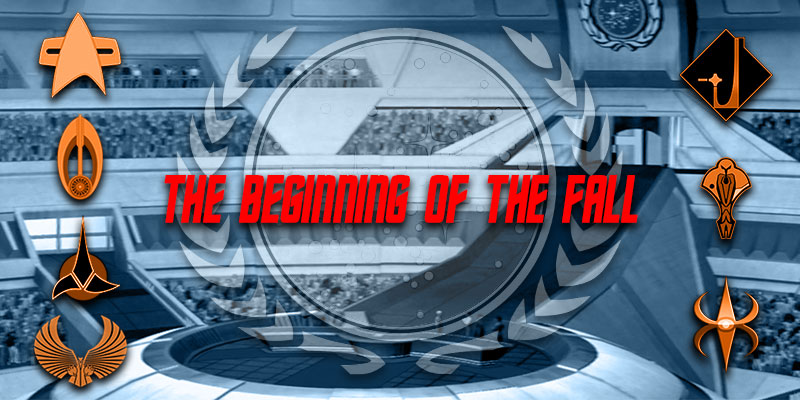 With the Federation taking a more vigilant stance towards the unknown, The Cardassians position as an Alpha quadrant power continues to dwindle as the Klingons thirst for battle boils within the Empire, All the while the Romulans remain ever watchful over their enemies.

But what dangers lie beyond the newly discovered Wormhole,  more importantly, how will Humanity cope with this new threat and what seedy underbelly has begun to rise to the surface of the Federation.

After the Battle of Wolf 359, Star fleet began upgrading their ships with better technologies and more powerful weapons.  Although their mandate was still to explore the unknown their stance towards it would be more vigilant.   However, where there is despair there is hope.

For not too long the Cardassians once again would have to surrender more territory including that declared in the treaty of Algernon.  One example of this would be the end of the Cardassian occupation of Bajor.  After almost 50 years of Occupation, the Bajoran resistance was able to defeat and push back the Cardassians out of their territory and opened negotiations with the Federation.

In hopes that Bajor would become a member state of the Federation, Starfleet was commissioned to send a peacekeeping force to the Bajoran system only to be lead by a survivor of the Battle of Wolf 359.

As Starfleet began taking over Terrok Nor now renamed Deep Space Nine and hope on the horizon this hope would be solidified with the Opening of a Wormhole to which the Bajorans called the Celestial Temple where their deities reside.

The Bajorans would see this as a great Omen foretelling a prosperous future and for Starfleet and the Federation what would seem like an opportunity to advance their agendas even further could not have come at a better time, or at least that is how it would seem.

Starfleet would order the new Commanding Officer of Deep Space Nine to explore whatever was beyond the Wormhole.  So Commander Sisko and his Science Officer Lt Jadzia Dax would travel through the Wormhole in a runabout.  Before reaching the other side Commander Sisko would encounter a Non-Caporial race of beings Known as the Wormhole aliens to the federation and the Prophets to Bajor.

This encounter between Sisko and the wormhole aliens would allow them to experience time and space from each others perspective enhancing Humanities understanding of the reality they inhabit. Although these would not be the last revelations of the prophets to Commander Sisko.  After their encounter, Sisko and Dax would emerge on the other side of the Wormhole to discover they are 50 thousand light away in the Gamma Quadrant.

Being met with no resistance it would seem new opportunities await the federation and the rest of the Alpha Quadrant.  Upon returning to the Bajoran system Commander Sisko would be heralded as their Emissary to the Prophets which would not only be precarious at best for Sisko but for the Federation as well.

Although the Federation member States have a variety of religions and faiths both the Federation and Starfleet are predominantly secular so to have an officer who himself is without a faith being admired as a religious figure by a people whom which he would have no prior relation would either help solidify Bajor’s admittance to the Federation or would push them away with their secular perspective-taking one of their best officers with them.

However, in time, the presence of the Federation and Starfleet would be welcome at Bajor and Deep Space Nine Starfleet would begin exploring the Gamma Quadrant.  Meeting new races and trade possibilities DS9 would become the main hub of trade and commerce between the two quadrants putting Bajor on the Galactic Map so to speak.

Unfortunately, within the time a name would begin being whispered in the winds.  A Word that struck fear in the hearts of some and was waved away as superstition by others.  As more and more expeditions were sent to and from the other side of the wormhole this Name would be spoken more and more which in time would strike the curiosity of the Starfleet.

As for many races, the name being spoken would be a thing of myth and legend, sadly for others, they were a brutal reality.  This word, this name, This thing of legend which would strike so much fear to those who would dare speak its name was non-other than the DOMINION.

The Dominion had complete control and authority over the Gamma quadrant and although many worlds suffered under their rule many still prospered as long as they would remain willingly under their Ummm Well Dominion.

However, this would not deter Starfleet from venturing further into the gamma quadrant the worlds they would encounter and more they would realise the destructive power of the Dominion.  Encountering recreated holographic civilisations once wiped out by the Dominion to worlds suffering from a disease that would be passed from one generation to the next as an eternal punishment left as an example to others should they not bow to the Dominions authority.

The Dominion would exact their authority through their militant wing known only as of the Jem Hadar.   A genetically engineered race of clones whose loyalty would be secured via their addiction to a narcotic to a substance called Ketracel White.  The Human race once did something similar back in days of the post-atomic horror however this strategy would be proven to be unreliable as the loyalty could only be maintained as long as the flow of the narcotic to the soldiers of PAH could be Maintained. Of course, this would play a major role in Starfleet’s strategy during the Dominion war but ill get into that in a later video.

Eventually, the Dominion would become aggravated by Starfleet’s further incursion into the Gamma Quadrant and would send the Jem Hadar to DS9 in order to warn them that they must not cross into Dominion Territory any further and to stay on their side of the Wormhole.

Once again Starfleet would be stubborn and not allow this new opportunity for expansion to be halted by a mere threat.  In order to show their resolve, they would send a post-Wolf359 Galaxy Class starship into the Gamma Quadrant as a show of force.  Even though its mission was to rescue Ben Sisko from the Jem Hadar, hi release could have been negotiated.

But when you have one of the most powerful ships in your fleet equipped with firepower capable of taking on the Borg… Well, let us just say its another case of how Power corrupts and absolute power corrupting absolutely.  Instead of respecting the wishes of another sovereign power, they would attempt to push their dominance which would not go the way they had expected.

However it The Dominion forces would show Starfleet that Bigger ships don’t necessarily make better ships. I guess it is true what they say it’s not the size of the boat but the motion of the Ocean. As Jem Hadar fighters would swarm and Hammer the Odyssey into retreat and even then the Dominion would show its resolve when several fighters begin suicide runs on the Galaxy-class ship obliterating it.

Has Starfleet finally overstepped its mark? Can one survivor of Wolf 359 balance the terror between the Dominion and the Federation?  Who will cry havoc and let slip the Dogs of War?

Find out next time, Here in the Continuum.

Watch my latest video below

Truth or Myth – Prime Timeline Or Not?  The Definitive Answer!