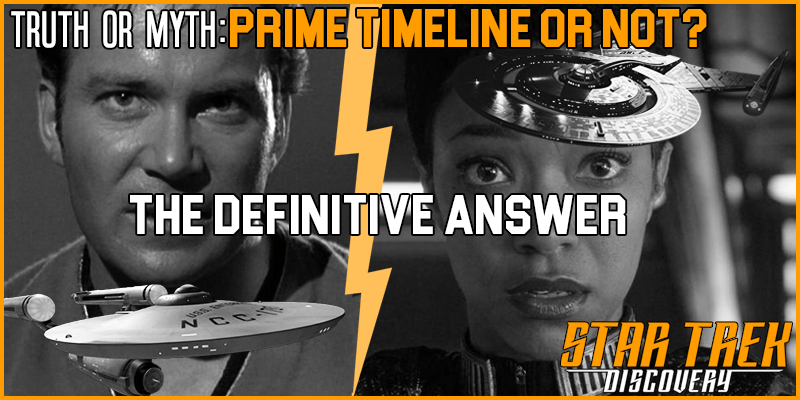 Truth or Myth – Prime Timeline Or Not?  The Definitive Answer!

One of the biggest controversies in the Star Trek Community is whether the comments made by the showrunners that Star Trek: Discovery is set in the “Prime Universe” are true.  So in today’s episode we take a look at that question and ask ourselves, does this make sense?

When a new Star Trek TV Show was announced CBS the public immediately was polarized with excitement and enthusiasm.  It seemed that after a long dry spell, The Trekking community was about to get the Star Trek Back they were waiting for.  For a lot of the die-hard fans, the JJ Star Trek movies just weren’t up to par and it was the general feeling that Paramount, had forgotten what Star Trek was really all about, but that CBS would be able to bring Star Trek Back to all its former glory.

Now in this video, I’m not going to delve that deep into whether Discovery is good or not.  According to the numbers and ratings provided by multiple sites, however, statistically speaking it is a success.  But one thing almost every fan of Star Trek can’t get passed is how different the look and feel of this Star Trek is compared to all the series created before it.

Set 10 years before Kirk and The Adventures of the Original Enterprise, Technology, design, and even the people seem darker and don’t seem to be the evolved type of humanity that we’re supposed to see in only 10 years time…

SO the debate of whether or not this series is the Prime Timeline (same universe that TOS, TNG, DS9 and Voyager takes place in) The Kelvin Universe, (The timeline that the new Star Trek movies are in) the Mirror universe (The Evil version of our universe OR if it’s just a new universe in general.

To confuse the problem even more that powers that be have declared that it IS, in fact, the Prime Timeline, but then how do you explain why it looks and feels so different?   Well, the truth is there IS an explanation for the whole thing, that can explain away ALL the things that fans are upset about it.  It’s a bit complex though, but let’s begin…

Star Trek has always played fast and loose with time travel.  Sometimes it creates a paradox, predestination or otherwise, and sometimes like In JJ Trek it creates another universe or timeline.  The reasoning for this, in reality, is of course for simple storytelling, but a definitive in-universe answer has never been given.

Now I want you to think of the order in which Star Trek was presented to the audiences.  That’s TOS than TNG, Then DS9 Then Voyager and stop there for a minute.  Pretend you’re a time traveller from saying the 29th century and your TV is a window to watch different events unfold in time, what do you see?  Well, you see 4 series where the timeline flows rather well…  It’s obvious that they belong to the same universe, so there’s no problem there.

Then for fun, you decide to go back before TOS and see the beginnings of Starfleet’s exploration program by watching the event of enterprise!  And everything is great, well that is until a probe sneak attacks Earth and kills 7 million people…  Why is that important?  It’s simple really, that’s the point in which the Prime Timeline was changed.

In Season 2’s finales called The Expanse, we find out that the temporal cold war is no longer so cold…  That Starfleet’s history has been changed. How do we know this though?  Because temporal agent Daniels told us so, though in a roundabout way.

In Season 3’s episode Azati Prime, Daniels brings Archer to the future showing him a battle against the sphere builders, a transdimensional alien species that wants to make our galaxy habitable for them, and begs him not to sacrifice his life and make peace with the Xindi in order to protect the timeline.  That in itself means that the timeline has been altered, after all, if history was unfolding as it should Daniels wouldn’t have to tell Archer anything.  And thanks to “future guy” seen in the season 2 finale we know the Xindi were never supposed to attack humanity in the first place.  So what does this all mean for the timeline?

Well, it’s really the butterfly effect, with the further in the future you go the more that’s changed.  Think about it for a second.  Suppose the Xindi never attacked Earth, to begin with, as the original timeline was supposed to be.  Then Archer would have gone on a year’s worth of exploration and scientific missions.  Starfleet and the Federation would have been created in that sort of ERA an ERA of discovery, excuse the pun.  The 7 million people would not have died and there would have been no real xenophobic outcry from people on Earth.

So a Starfleet growing in that ERA would focus on developing scientific and exploration starships and technology.  Things to further the goals of that timeline, leading to the TOS ERA.

But now, how does a Starfleet where Earth is attacked change?  Even though humanities primary goal of contacting, exploring and working with other alien cultures would continue, Starfleet would not be as blind to the dangers if space.  And thus would focus more on defence and offence then it had in the original timeline.  It’s sort of like how Starfleet built the Galaxy Class in TNG during an age of peace only to realize after the Borg attack in the BEST of BOTH WORLDS how vulnerable the federation really was and how it needed warships just in case.  And that, of course, would lead to ships like Defiant, the Enterprise E and Even Voyager being created. Ships that might be exploration vessels normally but can pack a huge punch when necessary!

That’s a huge change in the timeline.  Now think about Star Trek Discovery.  For whatever reason, the 29th century didn’t reset the timeline and fix the Xindi Problem. At least we have no indication of that. And since in Star Trek Beyond the Xindi attack is mention, as yes I know it’s an alternate timeline but up until the events in which the Narada goes back in time and destroys the USS Kelvin the timeline is the same, we can infer that the Xindi attack did indeed become part of the History of Trek without any change.

That means that Discovery IS the Prime Timeline but a Prime Timeline that has been fashioned after the sphere builders changed history.  Starfleet remained more vigilant rather than optimistically blind and would have pumped more resources into being able to protect itself.  Thus the technology changed.  Besides we don’t know what effect 7 million deaths had on the timeline either.  What if some of those deaths were important figures that had originally influenced a more peaceful Starfleet timeline?  What if some of those people were Starship designers destined to become part of Starfleet’s starship design teams?  And instead, now Bob has that place on the team and has a slightly different take on how a constitution class starship should look?  It’s actually quite scary when you think about!

So we shouldn’t be arguing if Discovery is in the Prime Timeline because clearly, it is, both with an in-universe explanation and the Show-runners themselves telling us it is, we should be arguing about why the Temporal Agents haven’t fixed the timeline change.  Is that what they’re there for, to begin with?  And we know they didn’t because of all the season 4 Enterprise episodes that reference the Xindi Attack.

Final Thoughts; Star Trek is based on opening everyone’s mind and accepting diversity.  The confusion is that some people think that means you have to like everything that happens, and that’s not true, you only have to accept it.  Arguments about Canon, or arguing about whether Discovery is real Star Trek or not only diminishes Gene Roddenberry’s vision.  You can love or hate it all you want, but be kind to others that don’t hold that same view, after all, infinite diversity in infinite combinations means more then what’s in your head is the only right answer. 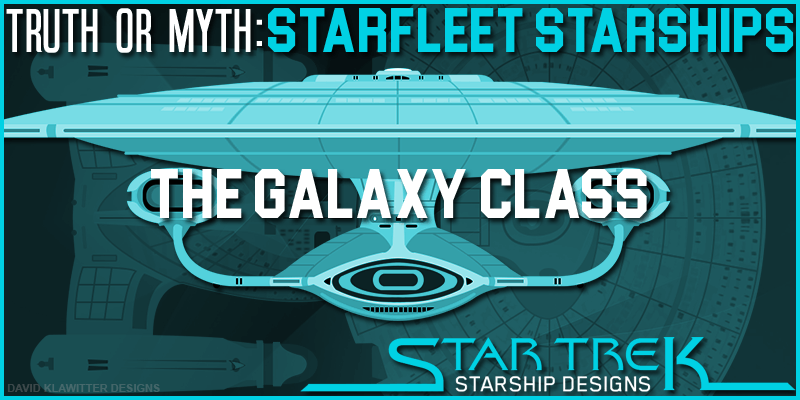 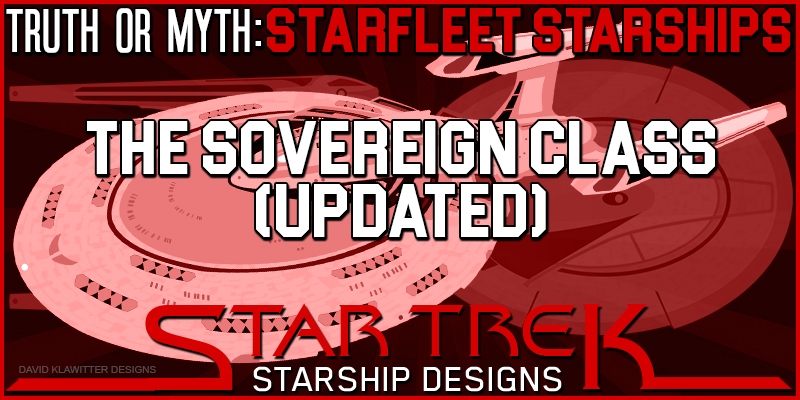 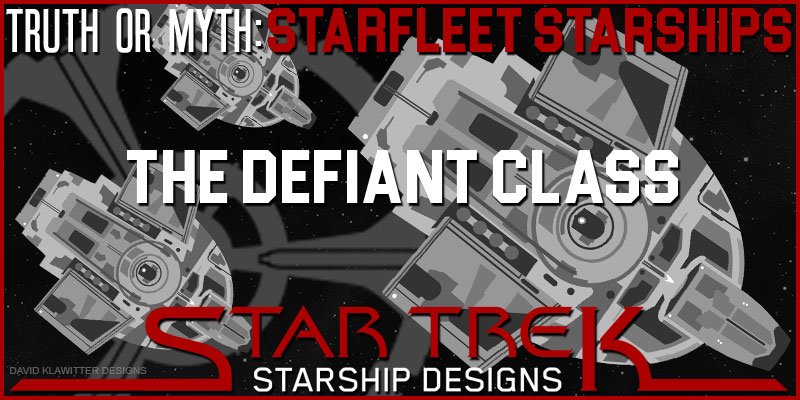 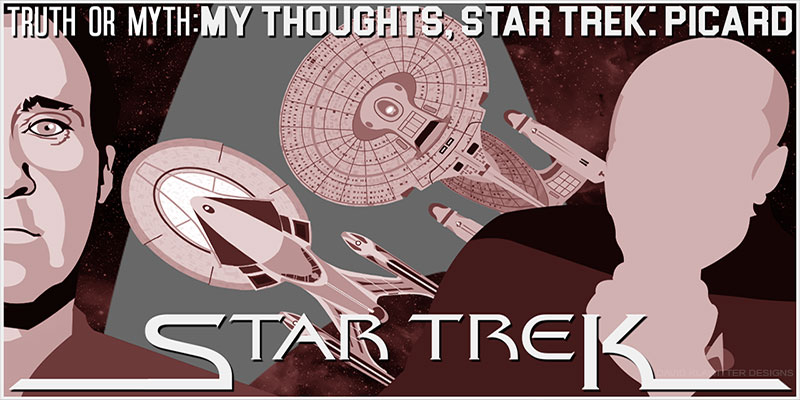