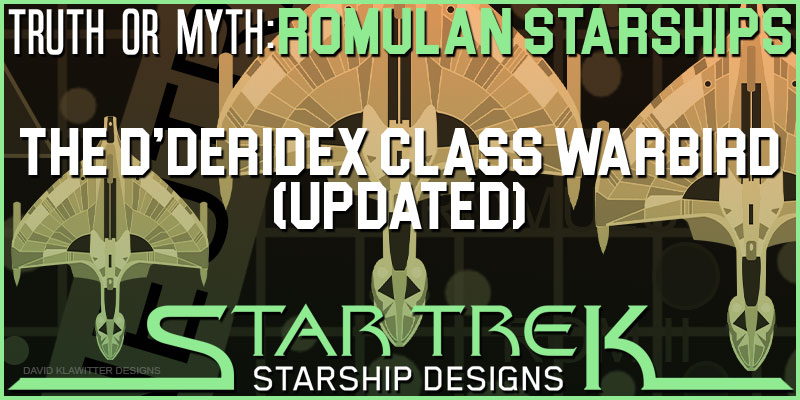 Hello and welcome to Truth OR Myth, a Star Trek web series that looks at the Truth, or canon, information to dispel the myths that have surfaced on any given topic.  In today’s episode, we’re continuing our look back at some of my older videos that are in desperate need of an update due to my own advancements in making these videos.  Today we’re taking a looking at the Romulan D’Deridex Class Warbird to better understand it’s place in Star Trek history.

For over 50 years the Romulan Empire had closed their borders and withdrawn from the Galactic Politics, that is until 2364 when the disappearance of many colonies along the Neutral Zone border brought the Empire out of the hibernation.  And in true Romulan Style, their re-emergence was marked by the reveal of their newest starship class, the D’Dereidx Class Warbird.

The D’Deridex Class Warbird was nearly twice the length of the Starfleet’s Galaxy Class but had a warp drive that was not as good or as efficient as Starfleet vessels of the time.  It was approximately 1 042 meters in length and 285 meters high with a crew of approximately 1500.

Able to sustain a warp factor of 6 safely while cloaked and a maximum of Warp factor of 9, irreparable damage would be caused to the Warbird’s propulsion systems if any speed over warp 9 was attempted, though the maximum speed a Warbird of the time had been seen as high as warp factor 9.6.

Unlike Federation Starships of the time, the D’Deridex Class used a forced quantum singularity as it’s power source but that meant that if the power core was not functioning perfectly, being even slightly off, an enemy vessel would be able to detect the ship even while the Warbird was cloaked. Another danger of this type of core was the potential to cause temporal disturbances.  Though this happened infrequently, notable instances of this danger can be seen when a trans-dimensional alien used a Warbird’s core to incubate it’s young, and when Chief of Operations Miles O’Brien of Deep Space Nine was being time-shifted temporally to the future as a cloaked Warbird was orbiting the station.

The cloaking device of the Warbird was one of the best of its time, showing that the Romulans continued to heavily develop the technology throughout its 50-year lack of contact with the United Federation of Planets.  But by the time of the Dominion War, the Romulan’s cloaking device was vulnerable to anti-proton scans at close range.

While travelling under cloak ALL starship emissions were closely monitored to ensure the vessel remained undetected. Like all Romulan Cloaking devices of the time, the D’Deridex Class could not operate its shields and the Cloak at the same time, this would leave seconds of vulnerability to the Warbird when the ship decloaked and activated its shields.  This was a vulnerability the Romulan Star Empire would continually try to resolve.

Cloaked D’deridex Class Warbirds radiated a slight subspace variance at warp speeds; therefore, ships travelling at speeds above warp 6 ran a much greater risk of being detected through their cloak then Warbirds which were travelling at sub-light speeds. To counter the Romulans Cloaking Device advantage Starfleet would implement subspace listening posts with gravitic sensors as well as tachyon detection grids that would be able to penetrate the cloak of any Warbird Passing into Federation Space.  These measures had various degrees of success.

Romulan Warbirds had a primary weapons array which consisted of disruptor emitters.  These arrays had variable energy output like Starfleet Phaser arrays and could be set for a continuous beam or pulses depending on the situation’s requirements.  In fact, after reestablishing their presence within the galaxy at large, some D’deridex Class Warbird were modified to use Phaser Arrays rather then disruptor arrays, testing which design was more effective for the class.  These Romulan Phaser Arrays would retain a greenish colour common to Romulan Weaponry.  Ultimately, however, the Romulan disruptor weapons array proved to be more efficient, and research into Romulan Phaser Arrays was suspended.

3 additional secondary arrays were also incorporated into the Warbird.  One at the top of the neck, one at the bottom of the neck and one at the tip of the nose. Also contained within the primary weapons array was a torpedo launcher. It is interesting to note, that Starfleet Command felt that 2 D’Deridex Class Warbird were more than a match for newer Starfleet Classes such as the Intrepid Class.  Though this theory has not been tested in reality.

The Bridge, crew quarters and science labs were located in the forward section of the ship.  The main bridge, having a configuration that was similar to it’s Starfleet and Klingon counterparts, was the nerve centre of the Warbird.  From a central chair, the Romulan Vessel commander had an unobstructed view of all the crew stations on the bridge.  It should be noted that there were MANY different versions of the D’deridex Class Warbird Bridge designs tested and in operation during its lifetime, but there WERE a few standard elements to each.

The command chair was on a raised platform to give the ship’s commander an absolute sense of authority over the ship.  And though the vessels immense size would dictate seating similar to the galaxy class for its first officer and mission-specific officers, the D’deridex Class would not see the inclusion of any other Command Chair Seating on the platform, instead of requiring the Warbird’s Executive officer to occupy a station of their own.  This station would often time control the weapons systems of this class, as generally speaking, the XO on a Romulan Ship would be responsible for the Warbird Commanders Safety along with that of the ships.

Although this was the standard for most D’deridex Class Warbirds, there were certain ships of the class that did in fact have 2 Command Chair seating positions, though these Warbirds were few and far between. Located in front of the vessel’s commander on the forward bulkhead of the bridge, was the ship’s main viewscreen.  This main viewer operated similarly to that of it’s Starfleet Counterparts but it’s shape reflected the design aesthetics of the Romulan Empire of the time, have a more oval shape and cut-outs.  Though older vessels of this class did occasionally see more traditional Rectangular shaped viewscreen designs.

Primary colours of the ship itself were beiges and greens with hints of teal and pink. Crew quarters were sparsely decorated and furnished, that’s in keeping with the Romulan belief that everything should be functional and not sentimental, this seems to be a carryover from their Vulcan cousins.

During a joint mission to devastate the Dominion, the Tal Shiar, the secret police of the Romulan Star Empire, teamed up with their Cardassian counterpart, the Obsidian Order and were effectively wiped out while attacking the Founder’s Homeworld.  The entire incident has actually been a trap created by the Dominion who had infiltrated the Empire and the Union.

After joining the United Federation of planets along with the Klingon Empire in the war against the Dominion in 2374, The D’deridex Class would see a LOT of combat, participating in many tactical engagements alongside their new allies, but after these engagements, the Romulan Empire came to the same conclusion as the Federation, that Bigger ships don’t actually always equal better ships.

As a result, the Empire began to design a new class of Warbird which could be constructed in a shorter period of time and was stronger than the D’deridex Class.  This would cause this design to be slowly phased out.

Though it’s unknown exactly how long this class served the empire one thing is certain, it was an amazing and powerful design.  Showing that the Romulan Star Empire was still a force to be reckoned with and they would become one of the most powerful and influential forces in the Alpha and Beta Quadrants…

However after the destruction of the Romulan Home World, and the Federations refusal to help the Star Empire with its evacuation of many star systems within the Empire including Romulus itself, this power and influence would be greatly reduced, making the Romulan Star Empire merely a shadow of its former self.

And this shadow has been looked upon by Starfleet Command and the United Federation of Planets as an example of how egotism and uncooperative actions can have long-lasting repercussions for a galactic power that can sew the seeds to ones own eventual destruction.

Never the less, it would be foolish to underestimate the Romulan People, and their design for the D’Deridex Class Warbird remains a constant reminder of what Romulans are able to accomplish when they set their mind to it.  As a result, the D’deridex Class Warbird would remain a shining example of Romulan Ingenuity, earning it places it Starfleet History.

Thank you for watching this revamped episode of Truth OR Myth.

What’s your opinion of the D’deridex Class Warbird, are you enjoying these updated videos?  Well leave a comment in the section below and don’t forget to like the video and subscribe to channel hitting that little bell icon so you don’t miss a single video we release.

What to help the channel with its Romulan Relief Effort? Then consider becoming a channel Patron, it really helps the channel out with equipment for making these videos and there’s a LOT of great perks for those who contribute, just click HERE to become a channel Patron…

Watch episode 111 of Truth OR Myth.