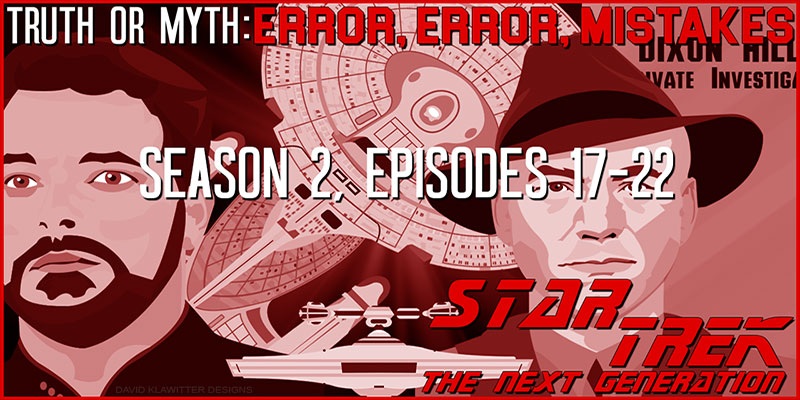 Hello and welcome to another episode of Error, Error Mistakes Truth or Myth?   In today’s episode, we’re taking a fun and fast look at the mistakes made in episodes 17-22 of Season 2 of “Star Trek: The Next Generation”.

A lot of people love these videos as I get constant requests for them and I do enjoy making them.  But the biggest question I get is, How come I don’t release more, faster?  Truth is these videos take an awfully long time to research, so as a result, I tend to make them only now and then when I have the time to really pour my heart into them.

And as always, Just a reminder, if you want to explain away any of the mistakes in this video, then it has to be with in-universe canon explanations only.  So Novels, Video games, tech Manuals and that guy who you see sometimes down the street that stares you down as you walk by are NOT valid sources to explain away the mistakes.  And so, with all that out of the way, let’s begin!

Alright so I have a big problem with this episode right off the bat, and please bear with me on this one.  Picard and Wesley decide to take a shuttle to the Starbase, but why?  I mean exactly why doesn’t the Enterprise just warp the 2 on over to the starbase and then go on about whatever duties they need to attend to?

You see, at one point Wesley makes the comment that the Shuttlecraft isn’t travelling at warp.  Which means, of course, it’s travelling at sublight speed.  We also know that sublight speed means under the speed of light with Full Impulse power being around 1/4 the speed of light.  So by doing some fancy math, using the 6 hour travel time to the starbase and using just under the speed of light (if that was possible), we can calculate the approximate distance to the Starbase.  And using some more fancy math we can figure out exactly how long it would take the Enterprise herself, at warp, to reach the starbase.

And you know what?  I was shocked to find that at its standard cruising velocity it would take about 33 seconds for the Enterprise to reach the Starbase.  33 seconds folks!  Is that really that much time off of the Enterprises busy schedule?  It just doesn’t make sense.  Of course if not for the long shuttle ride we would never have been treated to scene after scene of Wesley and Picard discussing sandwiches and Starfleet… At the beginning of the episode, Wesley tells Picard he’s heading to Shuttlebay 02 to Prep his shuttle for launch.  The problem here is that the markings on the shuttlebay floor, as well as the stock footage used, indicates they’re leaving from shuttlebay 3…

During one of the shuttle scenes, Picard tells Wesley about the incident with the Nausacans he had back in his academy days, the incident which directly leads to Picard having an artificial heart installed in his body.  The weird part here is Picard says he hopes Wesley never has to learn the feeling of being pierced through his back, as Picard still remember the feeling of the blade going through him.  How soon we forget Captain Picard that in season 1’s episode Hide and Q, didn’t Wesley already experience that?

When Troi finds out Geordi is on the Packled Ship, she immediately warns Riker that Geordi is danger!  However, instead of trusting in the Betazoid Counselor and Imazadi’s abilities, he instead contacts the Packled and trusts his own instinct.  This, of course, leads Geordi to become a captive.  Does this seem like a wise thing for Riker to have done? I also have a huge problem believing that at this advanced starbase facility no one can save Picard except for Pulaski.  Now I know the chief medical officer for the Flagship is supposed to be among the best in Starfleet, but come on, this whole plot thread just seems unbelievable.

Also watch the laser scalpels during the operation…  They are clearly wobbling, yet amazingly, their beams stay straight and on point!

Up The Long Ladder

The first question here is a simple one,  How exactly did the  Bringloidi send out a distress call in the first place?  When the Enterprise scans the planet, we’re told that there are no indications of a communications network or any artificial power sources.  So how exactly did they accomplish this Communications feat, and send a message all the way back to Earth?

The second question is in regards to the transporter.  Why is it in this instance, that when they beam up the  Bringloidi that the transporter beams the Hay up with them?  I mean usually, the transporter doesn’t beam up anything more than the people and whatever they’re holding.  The answer here is simple of course because it adds to the visual gag, but in reality, makes no sense at all.

And the final question comes from the cloning lab after Riker and Pulaski realize they’ve been tricked and had their DNA extracted to make clones of them.  In the lab we get a shot of alien writing in the lab, that is completely unreadable, does this make sense?  After all, these are human beings, and after only 300 hundred years were to believe that their entire language was changed from Standard English?  Take a look at documents from 300 years ago from which English stemmed from, and they are still very much readable by our English speaking eyes, so why then have they changed so much there?

Alright, given Lwaxana Troi’s dislike for the transporter, why is it the Enterprise beams her aboard.  I mean the craft she was in could have landed in one of the ships 3 shuttle bays, and given her status AS an ambassador, that would have made much more sense.  Of course, if they had of done that, we couldn’t have gotten the cute legs scene.

Why is it that Deana Troi never wears a dress uniform?  Every time there’s a delegation, an ambassador or an important function, we see Picard and the rest of the crew all decked out in Starfleet’s finest, Yet here, and in many other episodes, Troi simply wears her non-regulation, show it all off, jumpsuit.

One thing about this episode that I’ve always wondered is in regards to cigarettes.  In “The Big Goodbye”, Picard lights one up, takes a puff and begins to cough.  This means that the Holodeck has recreated a fairly accurate version of a cigarette, as that tends to be the reaction for first-time inhalers.  However, this begs the question, has someone programmed a Syntha-Cigarette similar to Synthahol?  You know all the great and wonderful benefits of smoking a cigarette, but none of the harmful after-effects?  Just food for thought…

Speaking of “The Big Goodbye”, in that episode several of the Holodeck characters see Picard in his Starfleet Uniform and comment on how Picard looks like a bell boy.  Why then in this episode, when Riker enters the Holodeck does no one give him a second glance?

Another transporter problem occurs at the end of this episode.  We know from various episodes that the transporter deconstructs a person or object quantum particle by quantum particle.  This process then begs a simple question…  If a person is a halfway into the beaming process, meaning, in reality, their lungs, vocal cords etc, are in the process of being ripped apart, how exactly can they speak?

At the beginning of the episode, we’re treated to a Poker game with some of the main cast of the show.  Watch the poker chip pile during this scene, it constantly grows and changes shape depending on whether there’s a close-up shot or a long shot…

Even Pulaski has chip problems in this scene.  After the hand she comments she’s all out of chips.  But then, after the emergency call to the bridge a long shot show Pulaski with plenty of chips left!

When Ambassador K’Ehleyr decides she needs to let off steam, she heads down to the Holodeck and requests a listing of exercise programs…  The Holodeck Complies and on the screen tells K’Ehleyr to choose one of the scenarios.  A little while later, K’Ehleyr catches on to Worf’s Program in the list and asks the computer to hold Worf’s Program.  it does so, but at the same time starts the simulation, as again evidenced by the Holodeck screen.  That means that before K’Ehleyr has chosen the program, the Computer has already decided that’s the one she’s going experience.

One thing that has always bothered me about this episode is in regards to Wesley Crushers’ experiment.  Are we really supposed to believe that schools in the future allow young people to play with antimatter?  Sure Wesley is an acting Ensign, but as far as we can tell he really has not had formal training in Antimatter, and even the best-seasoned officers can make mistakes with it.  Yet Wesley is allowed to play around with it at will?  Does that make sense?

This episode shows how adept Worf is as a tactical officer.  We find out that the Security Officer can project false images over the Enterprises sensors and viewscreen, making the crew believe a ship is approaching when nothing’s there.  How is he able to do this your ask?  Well it’s simple, he knows the security override codes for the Enterprise.  this makes sense.  But then at the end of the episode, Worf pulls the same stunt this time on the Ferengi Vessel, how exactly does he do that?  I doubt the Ferengi gave Worf their security override Codes…

Ahhhh Shades of Grey, one of the worst TNG episodes and the only clip show ever done by Star Trek.

Due to this episode being a clip show, there aren’t really a lot of mistakes to be dissected here, however, there are a few really big ones.  namely in regards to Riker’s Memory.

We are told that these are in fact the memories of Commander Riker, yet in several of the flashbacks, we are treated to scenes that show the other characters talking or performing tasks when Riker isn’t around…  So then that begs the question, how can these be HIS memories?

Thank you for watching today’s episode of Truth OR Myth.  Have an explanation for any of the mistakes I’ve listed here?  Or did you see one I’ve missed?  Leave a comment in the section below.  But don’t be fooled into thinking that it will be an easy task to change my mind about any of these, I’ve thoroughly researched each one and considered all the options to explain them away from that I could come up with…  But I look forward to hearing ALL your theories!

Also Don’t forget to like the video and subscribe to channel hitting that little bell icon so you don’t miss a single video we release.

Want to help the channel out correcting it’s mistakes?   Then just click HERE to become a channel Patron…

Thanks again for watching…  Live Long and Prosper…