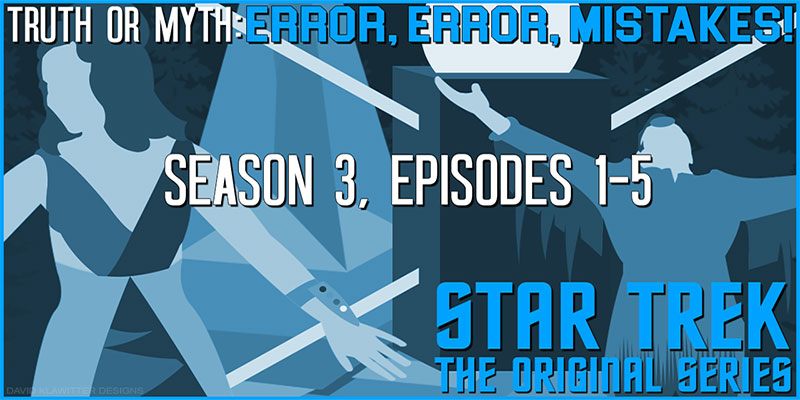 Hello and welcome to Error, Error, Mistakes, Truth or Myth?   In today’s episode, we’re taking a fun and fast look at the mistakes made in episodes 1-5 of Season 3 of Star Trek: The Original Series.

Just a little reminder, if you want to explain away any of the mistakes in this video, then it has to be with in-universe canon explanations only.  So Novels, Video games, tech Manuals and that guy at the Self Checkout of your local grocery store, who just can’t seem to figure out how to work the machine, are NOT valid sources to explain away the mistakes.  And so, with all that out of the way, let’s begin!

Well, here we are, Season 3 of Star Trek: The Original Series, a season considered by most of the fandom to be the worst of the series.  And so what better way to begin this video, then with a look at one of the most infamous of Star Trek episodes ever created, “Spock’s Brain”.

Besides the obvious silliness in this episode a question must be asked here, why do the woman, that have always lived below the surface of the planet, lost the knowledge?  This doesn’t make sense at all. Wouldn’t the original women have continued to pass down the knowledge to their female offspring?  And if not, why not?

Actually, a question about children should be raised here as well.  After giving birth, what happens to the male babies?  Are they kept below for a certain amount of time and then transferred to the surface?  And when exactly does that transfer occur?  There’s just a LOT that doesn’t make sense about this episode…

Watch Kirk as he is on the bridge trying to decide which planet to beam down too.  He keeps looking to the back of the bridge and quoting time periods, the weird thing here is, there’s no clock back where he’s looking.

Why does Spock’s body click as he’s remote controlled around?  Maybe they should oil up that brainless Vulcan, just a thought. Watch Kirk when he’s rendered unconscious, he falls to floor in an out stretch position, but suddenly in the next shot his arms change position.

Speaking of Kirk and the landing party after they are rendered unconscious by the underground vixens.  While unconscious they sit on stools.  How exactly is that possible?  Have you ever tried to sit in a stool while unconscious?  It’s impossible. Whoa, where exactly did Kara pull that Phaser out of?

And speaking of the phaser, it’s set to kill.  And Kara confirms this with a statement about how the “Teacher” gave her the knowledge of how to operate the phaser.  There’s one problem here though.  Kirk ordered Phasers set to stun, which means that Kara, since we’re watching her the whole time she recovers the Phaser from her abyss, somehow set the phaser to kill BEFORE she dawns the Salad Bowl of Knowledge.

McCoy kind of misspoke in order to convince Kirk to let him try the Salad Bowl.  McCoy says he may be able to retain the knowledge and bring it to the world…  What world?  Shouldn’t he have said the Federation? And also, why is it when McCoy loses the Knowledge, doesn’t another member of the landing party use the Salad Bowl?  I mean if Kara is any indication, you don’t need to be a brain surgeon, to BE a brain surgeon.

I also love how Spock’s Hair is constantly perfect in this episode, even though he’s had major brain surgery a bunch of times.

Actually, another thing that doesn’t make sense about the Romulan Commander is why exactly is her uniform such a short miniskirt?  During the dinner scene with Spock, she actually has to tug down on it to prevent the audience from seeing the Neutral Zone.  Does it make any sense that the Romulan Empire would dress its female commanders in such a way?

After the Enterprise escapes the Romulan’s clutches with the cloaking device, Spock escorts the Romulan Commander to quarters aboard ship.  They enter the turbolift on Deck one and Spock says, Deck 2, meaning they’re heading down 1 floor.  Yet this seemingly easy trip takes forever!

At the beginning of this episode, McCoy debates with Spock about telling the inhabitants of the planet about the incoming asteroid.  Spock basically says the reason not to, is that it would just frighten the planet’s inhabitants.  I think Spock’s brain might not have reconnected as good as we thought as he misses the main reason for not telling the inhabitants, that reason being, the Prime Directive forbids it.

When Spock has the Enterprise fire it’s Phasers in an attempt to destroy the asteroid, we see the phaser beams exit the ship parallel to each other.  Why then when the shot switches to them hitting the Asteroid do they suddenly converge?  This is physically impossible.

Watch Kirk while he gives his Cabin in the sky speech, a fly lands right on his forehead. With the warp drive out, Scotty proclaims that he can’t fix it hanging around in Space.  Does that mean that the Enterprise needs a Spacedock for repairs?  And if so, how far away IS a Space Dock?  I mean it takes the Enterprise 2 months at Impulse to reach the Planet itself.  So at the very least, it would take decades for the ship to hit a Starbase Facility, yet next episode, everything is hunky-dory!

And the Children Shall Lead

So this episode is my least favorite episode in the entire series, for me, it has absolutely no redeeming qualities.

Someone made a huge mistake with the Stardates in this episode.  At the beginning of the episode, Kirk gives the Stardate as 5029.5.  And when the landing party beams down to the surface they find all the scientists dead and recover the lead scientists log entries.  The problem here is that the scientist gives two of the Stardates as 5032.4 and 5038.3 meaning they were recorded AFTER the landing party had beamed down to the surface when he was already dead.

When the Enterprise leaves Triacus, 2 crew members are stranded on the planet’s surface.  Yet for the rest of this episode, including the ending, no mention is ever made about going back for them. Actually, the whole deal with the transporter in this episode is suspect.  How exactly did the transporter chief not notice that the ship was no longer in order of the planet?  Doesn’t the transporter operate with sensors?

The Children in this episode have to make rude gestures to evoke their magical powers.  We see this time and time and time again.  Yet when it’s Uhura’s turn to face her worst fear, the Mirror that will show the Communications Officer old and ugly is already in place waiting, and ONLY THEN do the children begin their hand gestures.  So how exactly did that mirror get there in the first place?  And if the children had done it at some point prior, why didn’t they follow through with the Old Age plan then?

When Kirk succumbs to the children’s magic, Spock rushes him off the bridge.  Watch the turbolift in this scene.  Not only does it start travelling by itself, but guesses the pairs destination correctly.

Is There In Truth No Beauty?

Okay, at the beginning of the episode Dr Jones beams aboard the Enterprise with the Medusan Ambassador in a box.  Spock greats Jones as though she’s the Ambassador, and she quickly corrects him.  The problem here is that Spock knows ALL about the Medusan’s hideous looks, after all, it’s why he wears the visor.  So does he really think Dr Jones is THAT hideous to assume she’s the Ambassador?  Poor Dr Pulaski…

Watch Kirk during the dinner scene…  At one point he finishes off his drink while talking to Dr McCoy.  Yet in the next shot, suddenly Kirk’s glass is half full again.

After Dr Jones confers with the Mudusan Ambassador about the mind-meld with Spock we get a shot of Captain Kirk.  Look closely at the Good Captain, see anything wrong?  That’s right, his hair is parted on the wrong side for only this shot. And again, watch Kirk as he stuns Spock after Spock goes mad with Medusan fever.  Kirk clearly is pointing the phaser at Spock’s head.  Yet somehow, the Phaser blast hits Spock in the chest.

After Dr Jones cures Spock of his madness, we see the Vulcan stumble into McCoy’s office from the corridor.  Is this logical?  Why would Spock exit into the corridor just to enter Sickbay from the outside?  Wouldn’t use the doorway actually IN sickbay have been a more logical thing to do?  After all, it is the direct route.

Wait at the end of this episode Spock slips back on the visor to transport the ambassador to the Mudusan Starship, just like he did at the beginning of the episode.  Yet this time, Kirk hangs around to see them depart, not even bothering with a visor for himself.  Isn’t this dangerous?  After all, didn’t Kirk have to leave the transporter room at the beginning episode BECAUSE of the danger?  And if it isn’t dangerous, then why does Spock put on the Visor?  Either way, a mistake was made here.

Thank you for watching today’s episode of Truth OR Myth.  Have an explanation for any of the mistakes I’ve listed here?  Or did you see one I’ve missed?  Leave a comment in the section below.  But don’t be fooled into thinking that it will be an easy task to change my mind about any of these, I’ve thoroughly researched each one and considered all the options to explain them away from that I could come up with…  But I look forward to hearing ALL your theories!

Also Don’t forget to like the video and subscribe to channel hitting that little bell icon so you don’t miss a single video we release.

Want to help the channel out correcting it’s own mistakes?  Then just click HERE to become a channel Patron…

Thanks again for watching…  Live Long and Prosper…