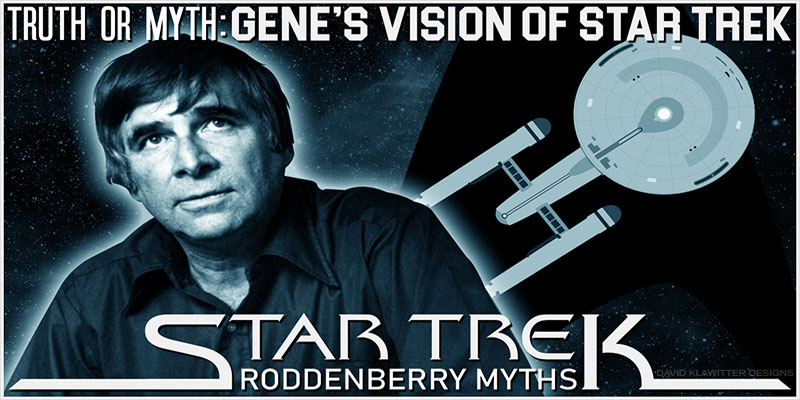 Hello and welcome to another episode of Truth OR Myth,  a Star Trek web series that normally looks at the Truth, or canon, information to dispel the myths that have surfaced on a given topic.  Today’s episode is very special, and very different one.  In today’s episode, I’m going to try to give you a glimpse into this mans imagination, and his view of Star Trek using his writings as your tour guide…  I hope you enjoy.

You know doing the extensive research for my Back Trek Historical Overview videos have afforded me a unique perspective into the mind and behaviour of Star Trek’s Creator gene Roddenberry.

Through autobiographies, interviews, magazine articles and speaking with people who knew the man intimately, I’ve tried to provide the most accurate portrait of the man himself as I possibly could.  But then I thought why not show you the mind of (the Creator) through his imaginings, and today, that’s exactly what I’m going to try to do…

As most fans know, Gene Roddenberry’s vision for “Star Trek: The Motion Picture” was VERY different then everyone else and ultimately, the product we finally got.

I’ve had some of the hardcore Star Trek fans, the Gene Worshipers, accuse me of tainting the man’s perfection simply because I don’t sugar coat genes bad behaviour and treat him like the god they view him as.  And I will never do that… Roddenberry was a man, a flawed, imperfect man, who oftentimes failed horribly to live up to the ideals he had helped set forth through Star Trek, but that isn’t what this video is about.

You see even though he was a flawed human being, he DID give us Star Trek and that fact alone means we ALL owe him a great debt, at least in those regards.  But it has always been Genes imagination that is the true treasure of Star Trek.  And his imagination combined with the imaginations of many other very talented people involved in Star Trek such as D.C. Fontana would end up making Star Trek into a series, a concept, that continues to endure even today.

Unfortunately, Gene Roddenberry died on October 24, 1991, So how can we take a realistic look into this mans imagination?  Easy, we just have to look at something he wrote himself, something like the Novelization of “Star Trek: The Motion Picture“. You see, Gene took the Screen Play for TMP and the Story from TMP that had been created by Alan Dean Foster and created HIS vision of that movie.

Now, of course, it is based on the actual Movie, well early drafts of it, but Gene took the ideas of the movie and reworked them just enough to include his ideas, and nothing for me at least exemplifies this more than the novels Opening…

In the opening of the novel, Gene writes about how Kirk has an implant in his brain and how Starfleet captains and above were implanted with these implants with full knowledge of Starfleet but hidden from the Federation at large due to the possibility of mind control, the Novels editor even referenced this with his editors note:

So yes, that’s right, in Gene’s mind, Starfleet was not an open and honest organization as many Trek fans always believe.  In his mind, they were a political entity, using lies and manipulations, to keep their image stain free.  And to me, that’s rather interesting.

Some fans a problem with the Federation having a Section 31 for example, and say, Roddenberry would never have a proved that, well right here in Roddenberry’s book is proof that he actually might have, that again he felt Starfleet wasn’t the goodie-goodie organization but that Kirk and his crew were the examples of what Starfleet and humanity should strive for.

Let’s face it, as I’ve proven in so many other videos already, Starfleet is a horrible organization, so many corrupt admirals all out for their agendas, Starfleet itself on the good days can’t even follow it’s own regulations like the Prime Directive, and here in this novelization, Roddenberry himself has sown the seeds of this view of Starfleet.

The other interesting part of this all is the technology itself existing.  In Roddenberry’s head, neural transceivers were not only in existence but perfected and utilized.  The implications of THAT also can not be ignored.

This changing and growing Star Trek with the times IS a Roddenberry Core value.  He never let Star Trek live in the past in that sense.  As soon as he could he change the look of Klingons, giving them the icon look that most fans associate with them.

Shortly after TMP was released, Gene was at a convention…  Now, this is a story I tell a lot to explain my views on changed to Star Trek, so bear with me…

Anyhow a fan came up the microphone and asked Roddenberry the following question, “Why did you change the look of the Klingons for TMP?”

Gene looked at the young a man a moment, the glimmer in his eye and said very simply, “I didn’t change the look of the Klingons, that’s how they always looked, You simply couldn’t see it before…”

And THAT is how Gene viewed changes in the Star Trek Universe.  He wasn’t afraid to update and change things as our real-life technology and understanding of the world grew around us.  This was a VERY admirable trait of the man and one that continues to live within Star Trek itself.

His response, single-handedly, set my beliefs and impressions for every Trek Series.  You see when I watch DSC or PIC and I see the visual changes that are made, I simply tell myself, what changes?  That’s the way it always looked, I simply couldn’t see it before.  And if this philosophy was good enough for Gene, then it’s good enough for all us.

You see canon IS important, but not as a visual guide, Roddenberry himself has taught us that, rather canon is an event or historical guide, it is the stories that are the MOST important part of canon.  And if all the fans of Roddenberry would truly step back and get to know who the man was, I believe there’d be far less discontent in Star Trek Fandom…

For all of the man’s flaws, he was right and brilliant about so many things as well, And I can say he wouldn’t want fans to turn against each other in his name, quite the opposite really as he said in multiple interviews when the whole TOS VS TNG conflict was happening in 87.

And if you want to truly understand the man, just read his work, it’s all their Black Print for the world to see, for centuries to come…

Thank you for watching today’s episode of Truth or Myth, what do you think of Gene’s interruption of the opening of Star Trek The Motion Picture.  Did you enjoy his little reading and analysis dive I did into the men mind?

Want to help the channel Keep the implants a classified secret?  Then just click HERE to become a channel Patron…

Truth Or Myth – Star Trek Connections – For All Mankind