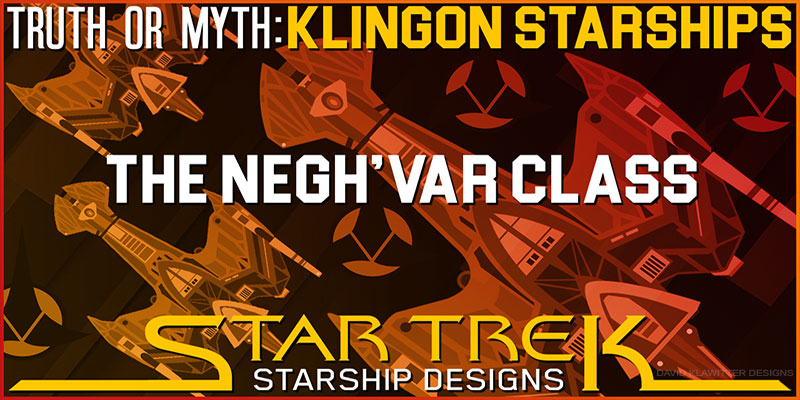 Hello and welcome to Season 4 of Triangulum Audio Studios and this it’s the premiere episode of Truth OR Myth,  a Star Trek web series that looks at the Truth, or canon, information to dispel all the myths that have surfaced on any given topic.

In 2372 the newest flagship of the Klingon Imperial Fleet the I.K.S. Negh’Var was launched to lead the Klingon Empire to Glory in their war against the Cardassian Union.  And this Warship would prove herself in combat so well, that the Empire would commission an entire fleet of Negh’Var Class Warships to protect the Empire…

In today’s episode, thanks to the results of my recent poll, we’re taking a look at the Negh’Var Class Warship of the Klingon Imperial Fleet, in an effort to better understand it’s place in Star Trek history.

The Vor’cha-class was one of the most powerful ships in the Klingon Defense Forces; it was also one of the largest warship classes in the Empire, carrying a formidable armament and demonstrating great manoeuvrability considering their relatively large size.

The Vor’cha’s status of top dog was short-lived however as when a New Klingon Chancellor, Gowron was named the Successor to K’mPec, he immediately ordered Klingon Starship designers to come up with a new, larger starship for him to command.

It is unknown whether this was due to Gowrons more forward and progressive thinking ways when compared to other Klingons, or if it was simply done to show off to all the other powers in the Galaxy.  Either way, the Vor’cha Class Attack cruiser would be outdone when the Negh’Var Class made its debut, meaning the Vor’Cha Class retained its top-dog status for less than a decade.

The Negh’Var Class measured approximately 682 meters in length, with a width of approximately 470 meters.  It had 39 decks and a standard crew complement of approximately 2500 Warriors. The overall design was actually fairly similar to other Klingon designs, sharing much of it’s design lineage with that of the D7, K’Tinga and Vor’cha Classes.

The ship was broken up into 3 main design components…  The Head, which contained the Bridge Module and the Body, which contained most of the barracks and engineering systems.  These 2 sections were connected by the Neck, again something seen in many other Klingon Starship designs.  However, the difference here being the neck was far thicker and more flared than in previous designs.

The Negh’Var Classes Standard Cruising Speed was Warp Factor 8, with an Emergency Speed of Warp Factor 9.  However, this class was able to reach speeds of up to warp factor 9.6, though this speed was not recommended.

Due to the nature of the Klingon Empire, most starships they designed were heavily focused on Offense rather than defence and the Negh’Var was no exception.  As a result, however, though stronger thanks to the available power output from the Klingons Warp Cores, Shielding on this class was pretty standard for its time. This class was also equipped with a standard cloaking device.

As with most Klingon Starship designs, there was no standard design for the interior of this warship class, instead, leaving the interior design up to the individual’s houses to decided upon, however, most warships of this class did share numerous similarities to other Klingon designs such as the Klingon Bird of Prey and Vor’cha class attack cruiser.

One of the most familiar things from one Klingon ship to another was that of its colour palette.  This consisted of Muted Greens and browns accented by Reds, Oranges and Yellows.

Though each ship of this class could have non-standardized bridge designs, there were certain design elements that were standard to each.  Located in the front of the bridge, against the forward bulkhead, was the ship’s main viewscreen. Also, the command chair was located forward of the crew stations to show trust in the captain’s crew and had the ability to swivel 360 degrees, allowing the captain to visually monitor all bridge operations. At the rear of the bridge were several aft stations, including the tactical position.

The ready room aboard a Negh’Var Class Warship was designed to emphasize the prestige and prowess of the ship’s Klingon captain. Along its walls, the captain would display weapons and trophies received in combat.

Crew quarters were standard for this class.  As Klingon Warriors did not believe or require the simple comforts that Starfleet officers then to take for granted, the crew aboard the Negh’Var class would be bunked up with multiple warriors occupying a very small space.  This also meant this class was believed to be able to hold up to 10000 Klingon Warrior should a mission require massive troop transport.

Like ALL Klingon Warships, the Negh’Var Class included a galley, actually several, where live food would be prepared for the crew as most Klingons did not prefer dead replicated food though replicators were available though mostly utilized for beverages such as Raktajino which was the Klingon Version of Coffee.

And also like most Klingon Vessels, any officer not on duty was encouraged to drink and celebrate victories of the past through stories and song.  This fostered a sense of comradery among the Klingon crew and in between battles allowed for a release of some of the Klingon Aggression inherent in the species. Many training and combat facilities were also located onboard this class in an effort to Keep It’s Klingon Crew’s skills sharp and ready for combat at a moments notice…

Designed to strike fear into their enemies and ultimately succeeding, the Negh’Var Class Warship would be the jewel in the Klingon Imperial Fleets Crown for decades to come. So confident was Chancellor Gowron in this new design and the power of the Klingon Imperial Fleet, that during the initial phase of its war against Cardassia, Gowron demanded that Starbase Deep Space Nine hand over the Cardassian Governing body to them or they would take DS9 for themselves inevitably starting a War with Starfleet and the United Federation Of Planets.

Believing the Station to weak and fairly defenceless, Gowron was outraged when his demands were met with a solid no from Deep Space Nine’s Station Commander, Benjamin Sisko. Sisko warned that Starfleet had had a year to prepare the Station for a fight with the Dominion and that even though the Klingon Empire had a massive fleet at their doorstep, that Deep Space 9 was more than able to handle any assault they could dish out.

Gowron did not believe the Sisko and as a result the Klingon Fleet took heavy losses before Gowron called off the attack realizing his Empire may not have been as ready as he thought to take on the Galaxy.  Though this would temporarily lead to the suspension of the Khitomer Accords, and a state of Cold War would be held between the Federation and the Empire.

That is until 2373, when all out War broke out between the United Federation of Planets, The Alpha Quadrant and the Dominion.  Chancellor Gowron then agreed to re-instate the Khitomer Accords and Join the Federation in their fight against the Dominion.

Ultimately successful after the Romulan Star Empire also joined along side the allies, The Negh’Var Class would prove itself time and time again in battle.

Like the few other classes in the Klingon Empire, the Negh’Var class would continue to serve the Empire with Honor and valor for many decades to come after it’s initial launch, earning this classes place in both Klingon and Starfleet history…

Thank you for watching today’s episode of Truth or Myth.

What do you think of the Negh’Var Class?  Would YOU serve aboard a Klingon ship?  Well leave your comments in the section below and don’t forget to like the video and subscribe to the channel, hitting that little bell icon so you won’t miss a single video we release.

What to help the channel maintain the honor of it’s house?  Then just click HERE to become a channel Patron…

Thanks again for watching, Glory to you, and your house…