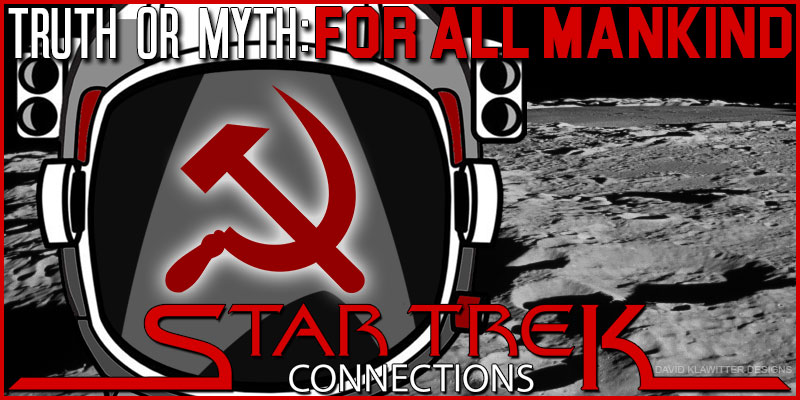 Hello and welcome to truth a myth, a Star Trek web series that focuses on the “truth” or “canon” to dispel all the myths that have cropped up over the years on any given topic.

Nowadays, turning on your Television or loading up your streaming service, it’s not unusual to find a plethora of prequel series of your favourite shows, new and old, to watch.  But what is unusual is to find a series that should be a prequel but simply is not.  And today we’ll look at one them, the series For All Mankind.

In today’s episode, we’re taking a look at Apple TV pluses series for All Mankind, a series which would fit snugly into the Star Trek Universe.

To be honest, I didn’t know what to expect.  I’ve always been a fan of alternative history style stories.  I was a huge fan of shows like Fringe and The Man In The High Castle until of course, they dropped the ball in their last season, and so I decided to give For All Mankind a chance.  I’m glad I did as I was blown away!

For All Mankind is an American science fiction television series created and written by Ronald D. Moore, a person who was heavily involved in Star Trek’s various series, though he’s probably best known nowadays for developing the 2004 Battlestar Galactica reboot, another show that was just fantastic.

If you haven’t seen or heard about the show, this is your warning that there will be spoilers, however, they will really be minor spoilers, things that you would catch from watching the trailer as opposed to be telling you the entire plot in great detail.  but if that kind of thing bothers you, now’s the time to tune out.

As I said before, the entire show is an alternate timeline story.  it’s a great what-if question that immediately pulls you.  The what-if question here though, is what if the United States hadn’t of been the first country to put a man on the moon?  What if it had of been Russia? This is a fascinating question and this series does an excellent job of answering that question.

So why I am making a video?  Well, it’s simple while watching the show, I was struck by how easily this could have been the start of Star Trek.  All the pieces fit so nicely.

The United States in order to one-up the Russians pours more of its resources into the space race.  As a result, technological leaps and bounds begin to occur as well as the entire US population wanting America’s presence in SPace, including establishing a base on the moon. This competition is absolutely logical, and given the might and nature of America, is completely plausible.

Star Trek’s Universal beginnings are somewhat clouded.  Back in 1966, not realizing what a phenomena Star Trek would become, would see the Original Series add Khan Noonian Singh to the universe.

He would be a genetically engineered superman from the latter half of the 20th Century, and in 1996 would put into cryogenic hibernation along with 84 of his followers, in a DY 100 Class spaceship and sent off into space ending what would become known as the Eugenics Wars.

In 1966 the ’90s were a long way away…  So nobody thought about the consequences of making this story to the Star Trek Universe.  As far as I know, we passed the 1990’s and there was no Eugenic War, so this automatically puts Star Trek’s Prime Timeline in a different timeline than our own.  Fictionally speaking of course.

So then the question is, what is the point of divergence?  When did our timeline and the timeline of Star Trek split apart?  And for me, it’s For All Mankind.

Think about, a cold war with Russia, a Space Race between these 2 powerful governments, I think we can all agree that if Russia was winning the Space Race, it might have forced the United States and other governments to take unusual and dangerous actions to once again gain the upper hand.

Would it be unusual for both sides to begin genetic experimentation?  Not at all…  First to live in Space, adapt humanity to it, it would be logical that genetic manipulation could and would happen.

Not only that but to protect both sides, while establishing a presence on the moon and eventually other planets would support the idea of Super Space Soldiers. And as both sides escalate themselves in an effort to outdo the other, it could also be possible that these genetic soldiers could ignite the Eugenics War in the 1990s.  The pieces fit in really nicely.

The Dy 100 Class along with Cryogenic Technology easily fits into this idea, as they would be products of this superspace race as well. But it doesn’t stop there really.  People who have watched my “Star Trek IV: The Voyage Home” mistakes video might remember a mistake that I brought up there about Leningrad.  In that movie, in the 23rd Century, Leningrad is still around…  There’s another such reference in “Star Trek: The Next Generation” episode “The Naked Now”.

That means in the Star Trek Universe, Communism didn’t fall, at least not in the way it did here in 1989.  And if the Russians were the first to land on the moon, that could be a contributing factor to Communism lasting a lot longer in the USSR then it did here in our real world.

Of course, we know that Communism must have fallen at some point, But for Leningrad to still around means if probably fell gracefully, and because of the Russian Contributions to the world, names like Leningrad would remain to honour their accomplishments.

World War III which started in 2026  and ran until 2053 was the last of Earth’s three world wars. And the conflict involved a nuclear cataclysm as well as genocide and eco-terrorism.   To me, this sounds like the perfect end to this competition between these 2 massive governmental powers.  And World War 3 would result in the death of 600 million worldwide, with most major cities lying in ruins.

But out of these ashes, Zephram Cochrane seeking fortune would end up breaking the warp barrier and within a very short time, Humanity would come together and rebuild itself into galactic power. Again this fits neatly into the For All Mankind narrative.  And also supports the idea of a graceful fall of communism, ensuring the Survival of the Soviet Union, all be it in a completely different form.

When watching the show you can so easily and clearly see how it would fit so easily into the Trek universe as a prequel.  now, of course, it really isn’t, but that’s not stopping me from adding it to my headcanon as such.

Ronald D Moor has once again created something very special with the show.  For me, besides the Star Trek feelings it brings up in me, the show itself is great.  Moore has hit that magic balance between action, drama and Sci-fi which usually eludes most writers and creators.

For All Mankind ended its first season on December 20th of 2019, And the show has been renewed for a 2nd season, and I’m so glad.  there were many questions yet to be answered with in the show, and I can not wait for them to unfold.

In today’s society, where Sci-fi shows are compared to each other and hated over because of their similarities and established fan bases, it’s really nice to see something new.  Something which fosters hope and wonder, but mostly something different.

And even though it’s so different, it still seamlessly can fit into a franchise we all love and adore.  It adds an entirely new dimension to the series if you watch it as though it was a Star Trek prequel.  So please check out For All Mankind.  If you love Star Trek, SciFi and Imagination Expanding Series, then I assure you, you will not be disappointed…

Thank you for watching today’s episode of Truth OR Myth.  Have you watched For All Mankind and if so, what did you think of the show?  Do you see the Trek tie in I see?  Well leave a comment in the section below and don’t forget to like and subscribe to the channel, hitting that little bell icon so you won’t miss a single video we release.

What to help this channel with it’s trip to the moon? Then click HERE to become a channel Patron…