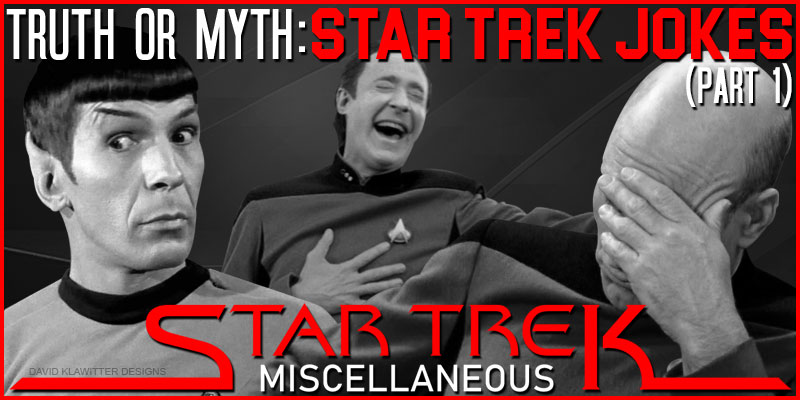 Hello and welcome to Truth OR Myth, a Star Trek web series that takes a look at the truth or canon to dispel myths that have propped up over the years on any given topic. Today’s a bit different though. Instead of taking a serious look at a serious topic, I’m throwing my warp drive in reverse and taking a look at some Star Trek Jokes in order to, hopefully, make you laugh. And after scouring the internet to find these jokes, I hope to do just that, I hope you enjoy…

The Star Trek franchise has always stood for an intelligent adventure through the cosmos, but it’s not always taken so seriously, and today I’ll attempt to make you laugh…

It was a difficult assignment, but Sisko was sure Odo could do it in some way, shape or form.

A young man was applying to join Starfleet: “Where were you born?” asked the recruiting officer. “Earth, sir.” “What part?” “All of me, sir.”

Well, that’s it, hope you had a laugh at these hilarious jokes I found. Do you have any Star Trek jokes to add to this list? Well leave them in the comments section below and don’t forget to like the video and subscribe to the channel, hitting that little bell icon so you won’t miss a single video we release.

What to help make the channel even funnier? Then click HERE to become a channel Patron…

Thank you so much for watching, live long and prosper…

In today’s episode, will be a bit different as we’re taking a look at the Centaur Class of Starfleet Starships. In another Beta Canon starship video…