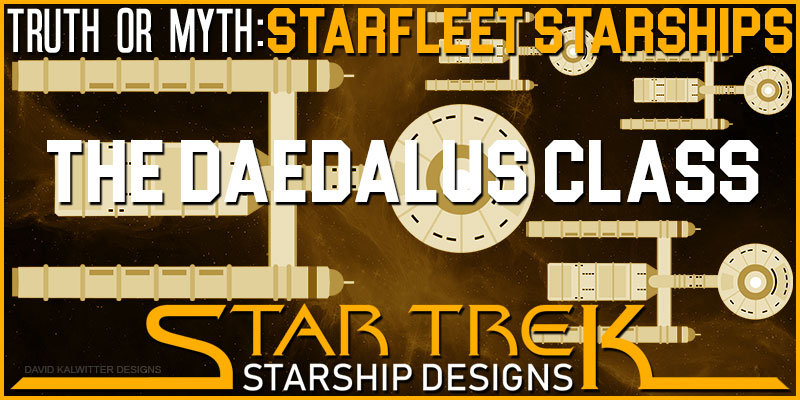 Hello and welcome to another episode of Truth OR Myth, a Star Trek web series that looks at the Truth, or canon, information to dispel the myths that have surfaced on a given topic.  Today’s episode is going to be a bit different as we’re taking a look at the Daedalus Class.

Starfleet was new, the United Federation of Planets still unborn and Design Engineers working for Starfleet decided to experiment with several starship designs attempting to find the perfect Starfleet Starship, and the Daedalus Class was born.

Normally, this series only gives you, the audience, canon information on a starship class.  Unfortunately in the case of the Daedalus class, there really isn’t that much canon information available on it…  So what I’ve done is thoroughly researched the Class through Beta Canon, or headcanon, and given you the most likely and most accepted stats about this class.

So everything in the video should pretty much be taken with a grain of stardust but can still be fit into your Star Trek universe but only as great imaginings from a class that is mentioned numerous times, but never really seen.  Anyhow, I hope you enjoy, and with all that out of the way, let us begin.

In the 2130s Starfleet was beginning to experiment with starship designs.  Starfleet wanted some sort of continuing aesthetic to all its ships, something that would quickly and easily identify any ship as an Earth ship. So Starfleet’s Corps of Engineers was developing 3 looks for starships.  The first design was an arrowhead design, the Second was a saucer design, and the final design was based on a sphere.

Though Starfleet would continue to develop the Saucer Design starship, eventually culminating in Starfleet’s First True Exploration Starship Class, the NX Class, the saucer design would reveal itself to be more complex than first envisioned, though, in the end, this design would prove itself to be the best design choice for Starfleet’s first warp 5 engine system.

The Daedalus Class, on the other hand, was a simplistic design based on simple geometric shapes, spheres and cylinders.

The Daedalus Class stood at approximately 105 meters in length and 7 decks tall, though after it’s refit in the late 2150s this would be increased to 10 decks and a crew complement of this class was 229 officers and men.

At its launch, the Daedalus Class held Starfleet’s most advanced Warp Engine System which allowed this ship theoretically to reach warp factor 3, but problems in this new engine system quickly popped up and as a result many adjustments and refinements to its engine systems were required before this classes warp drive was certified as safe and reliable. Many ships of this class were built and launched however during the initial testing phase of its new warp systems, but these ships were unfortunately restricted to the sol system only until the class was certified.

The Daedalus Class was also equipped with Starfleet’s most advanced weapons systems of the time, phase cannons and spatial torpedo launchers.  though both these system designs were in their infancy and as such proved to be inadequate for the exploration of space and the safety of the class itself. the Daedalus Class also included one of the first Polarized hull Plating System, a system that would be carried over in the NX Class virtually unchanged.

Once certified after the classes lengthy shakedown cruise, the Daedalus Class starships constructed would be sent out on various random courses with instructions to explore Final frontier, and report or bring their findings back to Earth, unfortunately, the later proved somewhat problematic.

The first problem encountered was how dangerous space exploration really was.  Many Daedalus Class starships would be lost doing what should have been considered routine exploration.

Attacks by hostile races were commonplace in the Alpha and Beta Quadrants at the time, while repairs to the ships and repairing design flaws within the class would become increasingly difficult as these ships went further and further from Human held Space. Often times Starfleet Command would request the assistance of their Vulcan allies to check up on ships in the area to ensure they’re well being, but would all too often receive a report stating the ship had been destroyed or simply vanished.

These early days of exploration would show Starfleet how truly unprepared it was to travel the cosmos but that in itself would bring many new Starship innovations.

The Second problem encountered by the class was in regards to communications itself.

Starfleet had only begun to develop a very crude version of the universal translator, and so when alien races were encountered by any ship, it was oftentimes left to the alien races own translation devices to allow contact, and as I’m sure you could easily guess when starships were encountered that had faulty or crude translation devices or none at all themselves, this often times lead to miscommunications and all-out conflicts.  To combat this problem, Starfleet doubled its efforts to create one of the most intricate and accurate translation matrices which would be included in the NX Class of starships, and become the standard for all Starfleet starships shortly thereafter.

The other problem with communications was the distance itself.  Subspace radio design was also in its infancy and often times would outright fail.  Thus a reporting ship would oftentimes not be able to maintain contact with Starfleet for updates and instructions. This would have the adverse effect of creating Captains that would be seen more as cowboys, taming the wild west of Space.  Often times making poor decisions that would not have been supported by Starfleet under normal circumstances.

This problem would lead to the development of a more stable subspace communications system as well subspace amplifiers that an exploring starship could drop in space creating a communications network, allowing for constant stable and continual contact with Starfleet Command.

By the mid-2150’s it was clear to Starfleet Command that their saucer design starships were winning the space race, and Starfleet decided to make that design look to be it’s standard going forward, and as a result, began decommissioning the Daedalus class, however, the growing conflict with the Romulan Star Empire would see the class get a new lease on life.

Also upgraded was this classes engine system, now allowing this ship to reach speeds of warp 5.7 as a standard cruising speed and warp factor 7 in the event of an emergency, making this class one of the fastest Starfleet had at the time.

Combining that with the new, much stronger phase canons and Photon Torpedo launchers, this class quickly became the backbone of Starfleet’s fighting force against the Star Empire, for a time Starfleet even considered making these classes look the standard, reevaluating it’s an earlier decision for a saucer design aesthetic to all its starships.  However, when push came to shove, the saucer designs still managed to be the better classes, though now, only by a small margin.

Starfleet would continue to utilize and construct this class up to the end of the century when finally the class was again, showing it’s age.

With the United Federation Of Planets immense scientific resources, the newer Saucer Design Starship classes were outperforming the Daedalus Class by larger margins with each passing day.  And so Starfleet would begin to phase out this class in favour of those designs…

Though many problems had occurred during the development, construction and deployment f this class, it’s importance in Starfleet history can not be overstated.  After it’s refit program the Daedalus class would become Starfleet’s primary exploration class simply due to the sheer numbers that could be constructed and were in existence after the Earth Romulan War, yet the Daedalus class is often overlooked by Starfleet historians.

But during its time, the Daedalus Class was highly prized and vigorously sought out by most Starfleet Captains as a vessel to command.  The influences of having a primary and secondary hull would even see this design quirk being introduced into the Starfleet Saucer Starship designs eventually leading to the legendary Constitution class of Starships in the 2240s.

It’s easy to forget a Class like this one in favour of the more intricate and beautiful as well as famous designs of the time.  But the Daedalus class proved itself and has earned its the place in Starfleet history…

Thank you for watching today’s episode of Truth or Myth, what do you think of the Daedalus Class?  Did you like my non-canon interpretation of it?

What to help the channel win the Earth-Romulan War?  Then click HERE to become a channel Patron…