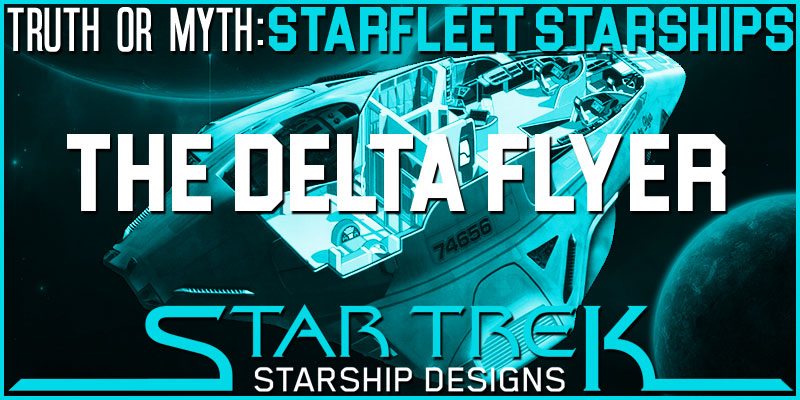 Hello and Welcome to Truth OR Myth, a Star Trek web series, dedicated to the truth or Canon information, to dispel any of the myths that have cropped up over the years on any given topic.  Today we’re taking a look at the Delta Flyer to better understand its place in Star Trek history.

Created out of need and desperation, the Delta Flyer Type Shuttlecraft would become one of Starfleet’s Best and Most versatile Shuttlecraft designs ever created in Starfleet History.

Stranded and alone in the Delta Quadrant, attempting to make it’s way home, The U.S.S. Voyager, under the command of Captain Kathryn Janeway quickly discovered that Starfleet’s Current level of Shuttlecraft design simply wasn’t up to the task of exploring the unknown dangers of the quadrant.

So, in 2375, when a very advanced multi-spectral probe of Voyagers was lost in the atmosphere of a gas giant, and the Malon began engaging in their own salvage operations to retrieve the probe.  Captain Janeway approved construction on this new class of shuttle craft.

The Delta Flyer was approximately 20 meters in length and 8.5 Meters wide.  It was designed to hold 6 crew members comfortably but could handle more in the event of an emergency.

Systems with in the Delta Flyer design was a combination of both Federation and Borg Technology.  This allowed for a much stronger vessel with superior structural integrity to that of its predecessor the Runabout.

The Delta Flyer was warp-capable, and held nacelles that extended while at warp, and retracted at sub-light speeds.  This engine system also conformed to Starfleet’s new requirements for warp vessels to prevent damage to subspace during warp travel.

The Delta Flyer was capable of a sustained cruising speed of warp factor 6 and a believed maximum of warp factor 7.5 in an emergency, though this information is currently classified and can not be confirmed.

Tactically, this little vessel was more equipped than some of Starfleet’s Exploration Starships.  This design included 8 Phaser Arrays, Photon Torpedo launchers, Photonic Missiles launchers and a pulse phased weapons system.  Most of these systems were augmented or completely of a Borg weapons design.

Defensively this class was also amazingly outfitted.  the Delta Flyer contained Immersion Shielding, allowing it to travel to extreme depths in an oceanic or gaseous environment,  Unimatrix shielding, Multi-adaptive shielding, parametallic hull plating and a duranium-reinforced hull.  All these defensive enhancements allowed the Delta Flyer to hold her own in a battle against much larger vessels for longer periods of time then any shuttlecraft or fighter had ever been able to do before.

It’s ultra-aerodynamic design, combined with being constructed of a tetraburnium alloy, would allow this shuttlecraft design to conduct extreme manoeuvres while in atmospheric flight making this a very versatile design.

Improvements to the design would occur through its early lifetime, including the addition of retractable impulse thrusters that greatly increased the vessels impulse speed when deployed.

Internally, the Delta Flyer was broken up into 3 sections.  The forward Section contained the Cockpit and control area, The Mid section contained equipment housings and the ships lavatory facilities, while the after section contained a work area, living accommodations and medical systems.

The Cockpit and Control Area was a sleek yet compact design.  A ramp leading down towards the front of the vessel contained the Helm and Navigational Console.  This console could also assume control over all ships systems should the need arise.

The upper area on the deck held the Tactical, Operations and Engineering Station.  The engineering station was responsible for all other systems not monitored by either the Ops or Tactical stations such as environmental systems.

All scientific systems were controlled from the Ops Console.

Though most consoles in the cockpit resembled that of standard Starfleet LCARS control panels, this design also included more tactile panels which included button and switches harking back to earlier Starfleet STarship Design Consoles, though this inclusion was purely aesthetic and added nothing in terms of functionality to the Delta Flyer’s design.

But with upgrades to the design, after the original prototype was lost, the helm console would contain 2 manual steering columns which allowed for better control over the vessel.

In the aft compartment,  The vessel featured a retractable biobed for medical situations. Though, the Delta Flyer’s medical accommodations were limited and primarily intended to stabilize a patient until he or she could be returned to Voyager for treatment.

Work stations were also on either side of the bed and replicators were located at various points inside the craft.  This section also included locker and cargo storage areas.

Also included in this design was a small escape pod in the event of a catastrophic emergency that would require the onboard crew to abandon ship.

The crew of the U.S.S. Voyager actually built 2 Delta Flyer Crafts before succeeding in their mission to return to Earth.

The first Delta Flyer proved the craft design with flying colours.  Partaking in a number of missions which included Rescues, diplomatic missions, scientific study missions, and tactical and defence operations.

Unfortunately though, in late 2376, the first Delta Flyer was sacrificed in a plan concocted by Janeway and her crew to free many Borg Drones that had been enslaved by the Collective.

As a result of her illustrious though short career, Captain Janeway commissioned a second version, with improvements in design elements to be constructed and this Delta Flyer was commissioned in early 2377 and would continue to prove the design through various missions this craft undertook.

The life of this design after Voyager’s return home is somewhat clouded, as the vessel still remains a closely guarded and classified Starfleet secret.  Though due to it’s many successful missions through out its career there is no doubt that Starfleet would adopt this design to be included on other Federation Starships, as the delta Flyer type Shuttlecraft would put to shame all previous Starfleet shuttle designs by light-years.

And there is no doubt, that the Delta Flyer Class would continue in operations for Starfleet as well as being the basis for brand new shuttle and fighter designs for years to come, earning this vessel it’s place, in Starfleet History.

Thank you for watching today’s episode of Truth OR Myth.  What do you think about the Delta Flyer Design?  Would you take this shuttlecraft into combat?  Well leave a comment in the section below and don’t forget to like the video and subscribe to the channel hitting that little bell icon so you won’t miss a single video we release.

What to help the channel free Enslaved Borg from the Collective?  Then become a channel Patron, the link to our Patreon account is in the description below…

So again, Thanks again for watching, live long and prosper…