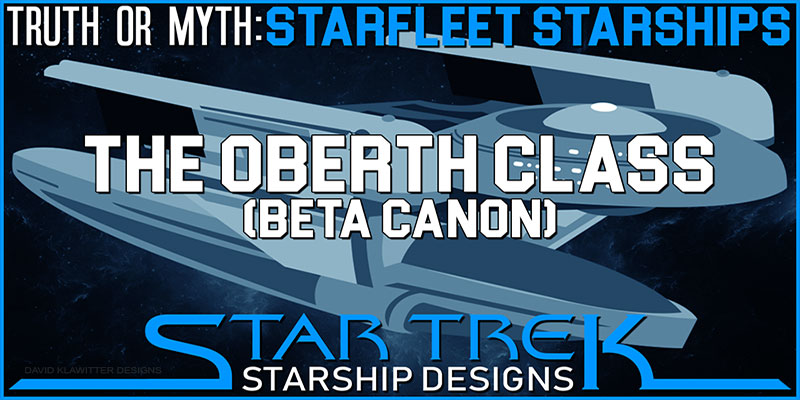 Hello and welcome to another episode of Truth OR Myth,  a Star Trek web series that normally looks at the Truth, or canon, information to dispel the myths that have surfaced on a given topic.  In today’s episode, we’re taking a look at the Oberth Class of Starfleet Starships in an effort to better understand their place in Star Trek history.

The Oberth Class was a welcome addition to the Star Trek universe.  Being thirsty for new starship designs, the Star Trek movie began to reveal these designs to fandom in spades.  Unfortunately, this design would not only get the reputation of being a weak and easily destroyed design, but fandom would almost immediately have a problem answering one question, how do you get from the primary hull to the secondary hull.

And although eventually answered on screen, the Oberth Classes design history would remain a mystery, that is, until today….

There isn’t a lot of information on this classes history, so what I’ve done is thoroughly researched the Class through Beta Canon and filled in some of the gaps with my imagination, all to give you good “Tri-naries” a little bit to chew on about this beautiful class.

As a result, though, most information in this video should pretty much be taken with a grain of stardust, and only considered a little bit of Star Trek Fun!   And so, with all that out of the way, let’s begin.

By 2265, it was becoming Dilithium Crystal clear to Starfleet Command that it’s the current level of starship design simply was no longer cutting it. Between 2265 and 2270,  almost 50% of the original Constitution classes had either been destroyed or very badly damaged.  As a result of this, and coupled with Starfleet almost being defeated in a brief war against the Klingon Empire in the mid-2250s, the powers that be had ordered brand new starship designs and poured resources into technologies that would benefit the United Federation of Planets.

The ultimate result would be a brand new, state of the art ,refit, Constitution class, which would once again propel that class to forefront of Starfleet’s Starship classes. A brand new, far more powerful warp core, along with many new and improved  offensive and defensive starship systems would justify the resources placed in to projects but Starfleet Command wanted more, they wanted other starship designs based on this new technology.

During the technology testing phases of the project, the U.S.S. Miranda had been commissioned as the testbed for all the upgraded tech and had performed admirably.  As a result, Starfleet would commission a new class, known as the Miranda Class, as it’s second class to carry the new technology.

Considered a light cruiser, the Miranda Class would become somewhat of a workhorse for Starfleet, becoming a jack of all trades, so to speak, when it came to a mission profile.  And although versatile classes, both the Miranda Class and Constitution Classes have one downside, neither was a dedicated science vessel class which could utilize Starfleets extensive breakthroughs in scientific technology.

So heading back to Starfleet’s Core of Starship Design Engineers, Starfleet requested a purely scientifically dedicated class, to fill that gap, and so the Oberth Class was born.

Standing at about 120 meters, this class contained 13 decks including the secondary hull. Capable of a standard cruising speed of Warp factor 5 and a maximum speed of Warp factor 6, the Oberth Class wasn’t exactly the fastest starship class in the fleet, though given it’s designated mission profile, speed was never a necessity. Initially equipped with only 1 forward facing  phaser bank, some later designs would see the inclusion of both a port and starboard phaser emitter, and a single photon torpedo launcher.

The Oberth Classes interior bulkheads were also designed with a Victrium Alloy to better facilitate it’s shielding and allow this class of starship to withstand gravitational wavefronts. The Oberth Class was a complete departure from Starfleet’s standard starship design.  Although containing both a primary and secondary hull, this class would not connect the 2 in the traditional sense with a neck, rather using its nacelle struts to join the starship.

This change in design was done on purpose.  You see, the secondary hull was to act as the primary scientific section of the ship.  the primary hull having living quarters and support facilities. Due to the intent behind this class being one of its ability to study new and strange phenomena discovered in the milky way, Starfleet wanted a starship the could easily jettison it’s secondary hull should the scientific study and or experimentation they were conducting get out of control and present a real danger to it’s crew.

This had been a lesson Starfleet had learned from the 5-year exploratory missions they had sent the original Constitution Class starships on.  Far too often, a starship’s crew would be lost due to the inter-connectivity of the ship and its systems. And so essentially, the Oberth classes secondary Hull would act as a quarantine Zone, crewed at any given time only by those required for the scientific study. Also like all Starfleet Starship classes, the Oberth class included escape pods which were capable of holding nine personnel a piece in case of an emergency evacuation.

The Secondary hull would also sport Starfleet’s brand new, very large sensor array system.  Based on technology developed for outposts along with the Klingon and Romulan Neutral Zones, this sensor array system would be the most advanced ever created in its time. And do to its size and processing power, the new sensors were able to conduct planetary surveys in immense detail while simultaneously being able to do it in a fraction of the time it took other Starship classes to complete them.  It was an amazing technological development that is still heralded as one of the most important in Starfleet History by Federation Historians.

Keeping in line with the idea of a quarantined section of the ship, access to the secondary hull would be achieved via 2 turbolifts which ran through the pylons of the ship.  These turbolifts were not standard by any stretch of the imagination, is far smaller than those normally aboard a starship.  But again, due to the design, these turbolift shafts had emergency bulkheads at each deck, and the pylons themselves could be opened to space to jettison any hazardous materials that could threaten the Primary Hull and those living in that section.

The warp nacelles on this class were connected directly to the primary hull.  And though it appears that the pylons themselves would act like traditional starship pylons, carrying the conduits to allow the warp drive to function, this couldn’t be further from the truth. Power transfer conduits did connect the sections of the starship together through these pylons but that was all.  Main engineering itself was actually in the primary hull.  This meant that if a catastrophe occurred that required the ship to Jettison its secondary hull, the primary hull itself was still capable of warp and standard starship functions.

Much smaller engineering, with its own reactor, did, in fact, exist in the secondary hull.  Should an emergency separation be required, this meant that the secondary hull could continue operations allowing it’s crew a chance to reestablish control over whatever experiment had gone awry.  And if control COULD be reestablished, then the primary hull could tractor the section back to a Starbase to be reconnected. Eventually, however, re-connection of the 2 sections at a Starbase would no longer be necessary when an auto latching system for the class was invented.

Also later in the life of the Oberth Class, different versions of this starship design would be constructed.  These included a personal transport design and a cargo carrier design.  And although the idea of creating a defensive design was toyed with by Starfleet for a while, that idea was ultimately dropped, as at the time, the technology available to Starfleet, along with the Pylon Design Starfleet had to work with for this class made turning the Oberth Class into a fighting machine merely impractical and not feasible.

As with most Starfleet starship, the bridge was located on deck 1, and although slightly smaller than standard starship command centres of the time, the bridge still contained all necessary stations to complete a variety of Starfleet’s mission requirements.  At the rear of the bridge was a single turbolift, echoing an early design concept in Starfleet History. By the 24th Century, an emergency hatch was included on the bridge which allowed for access to space in case of an emergency.

The Oberth Class was a huge success overall, though due to the nature of it’s mission profile would see many more lost then was standard for a starship class of its time.  But because of its success, Starfleet would continue to use and construct this design until the late 2360s, when the breakthroughs in technology as a result of the Borg Attack on Wolf 359 would see the Nova Class developed to replace this ageing class.

And although this class would receive a reputation for being easily destroyed, both Starfleet Command and Federation Historians can not deny the impact this class had on exploration and discovery within the Alpha and Beta Quadrants, earning this class it’s place in Starfleet History…

Thank you for watching today’s episode of Truth or Myth, what do you think of the Oberth Class?  Did you like my non-canon interpretation of it?  Do you want to see more episodes like this one?

Well leave your comments in the section below and don’t forget to like the video and subscribe to the channel, hitting that little bell icon so you won’t miss a single video we release.

What to help the channel not be easily destroyed?  Then consider becoming a channel Patron, the link to our Patreon Account is in the description below.  Thanks again for watching, Live long and prosper…

What to help the channel not be easily destroyed?  Then just click HERE to become a channel Patron…