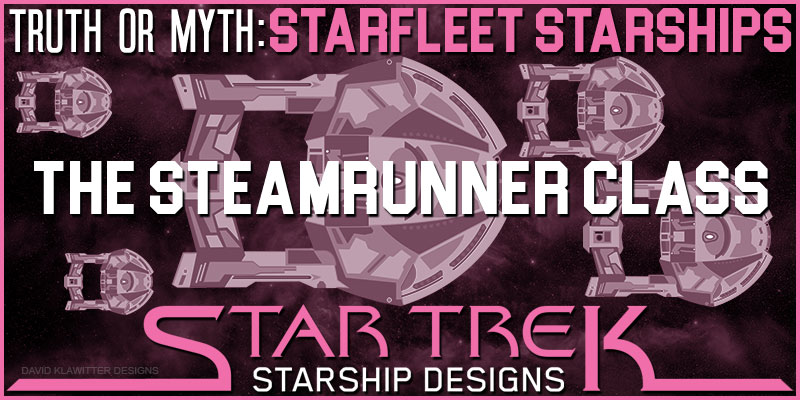 Hello and welcome to Truth OR Myth,  a Star Trek web series that normally looks at the Truth, or canon, information to dispel the myths that have surfaced on a given topic.  Today’s episode is going to be a bit different as we’re taking a look at the Steamrunner Class.

An experimental new design, the Steamrunner Class would prove itself an asset time and time again through battle after battle.  As a result, Starfleet Command would continue to construct this class for decades to come.

Normally, this series only gives you, the audience, canon information on a starship class.  Unfortunately, in this case, there really isn’t that much canon information available on this class…  So what I’ve done is thoroughly researched the Class through Beta Canon, or headcanon, and given you the most likely and most accepted stats about this class.

So everything in the video should be taken with a grain of stardust but can still fit into your Star Trek universe but only as great imaginings from a class that is seen in the background numerous times, but hardly featured.  Anyhow, I hope you enjoy, and with all that out of the way, let us begin.

By the year 2364, The Alpha and Beta Quadrants began to see an escalation in conflicts between both established powers and new powers on the block.  And with the Battle of Wolf 359 in 2366, it was made extremely clear that Starfleet’s Starship force was simply not up to the task of fighting off an enemy like the Borg.  And so Starfleet began to double its efforts in developing both new technologies and starship designs that could confront and engage in any threats the Federation might fall under.  One of these starship designs was that of the Steamrunner Class.

The Steamrunner Class was a complete departure from previous Starfleet Starship designs.  Normal a Starfleet starship would have at least a saucer section which would have pylons connecting it’s warp nacelles to that primary hull.

This design, however, The nacelles themselves were directly attached to the saucer section by large cowlings, which also housed the Bussard collectors. The ship’s deflector dish was housed in the rear of the ship, on a detached secondary hull, while the bridge module was inset between the Bussard cowlings providing limited weapons fire cover for the bridge, something not seen in most Starfleet designs.

The Steamrunner Class stood at approximately 375 meters in length, with a width of approximately 270 meters.  it contained 18 decks and was crewed, 200 officers and men. For specific missions, this class could hold an additional 50 passengers comfortably, but in an emergency situation it could accommodate an additional 550 evacuees.

Standard cruising speed for this class was warp factor 6, but the Steamrunner Class could reach speeds up to warp factor 9.6 in the event of an emergency. Tactically, this class was equipped with 4 Type 10 Phaser arrays emitters which provided full coverage for the class.  This class also contained 2 Photon torpedoes Launchers as it’s standard, but could also easily modify these launchers to house and fire Starfleet’s newest Torpedo invention, the Quantum torpedo. Shields and defensive systems for this class was standard for the time.

The prototype for this class, the U.S.S. Steamrunner, was launched in the year 2370, and immediately ran into several problems during its shakedown cruise.

The first problem was in regards to the classes warp propulsion system.  Starfleet had begun to experiment with integrated warp nacelles in effort to improve engine efficiency, allowing for tighter warp fields, and to grant greater protection to a starship, being able to decrease a shield bubble size while simultaneously using the extra power from the decreased bubble size to reinforce the output of the shield.

The other reason for integrating nacelles into the actual ship was for easier repair to nacelles during combat.  these were sound and logical ideas but proved far more complex to execute then Starfleet’s Engineers had imagined. When Starfleet had begun to develop this class, the intention was to use its current Warp Technology with these new nacelles.  However with the advent of more powerful and smaller warp core designs, Starfleet engineers merely swapped out cores thinking everything would work out fine, but it didn’t.

The new warp cores were overpowered for vessels the size of ships like the Defiant Class and Steamrunner Class.  these classes nearly shook apart when the cores were tested at full power.  And with the declining urgency of the threat of another Borg attack, Starfleet decided to re-evaluate it’s starship designs and focus on the classes they felt had the best chance of being adapted for other purposes rather than just conflict-oriented designs.

And following this decision, the Defiant Class, among others, would be mothballed until some future unknown date when Starfleet could re-assess the design and better understanding the technology involved. The Steamrunner Class, on the other hand, would continue its shakedown cruise in an effort to isolate and solve the warp core problem.  And eventually, Starfleet’s engineers were successful after implement numerous changes to technology and these changes, along with others, would eventually be included in the other classes having similar problems such as the Defiant Class.

The second major problem encountered in this class was due to it’s detached secondary hull.  Originally the design used a mix of traditional turbo lifts along with a new transporter based turbolift system. These, affectionately named trans-turbolifts, would allow crew members to basically transport to another trans-turbolift pas with in the ship.  The theory being increased response time by crew members in the event of an emergency.

Again another sound and logical theory that simply didn’t work in practice. The major problem was again during warp flight.  The integrated warp nacelles cause too much interference in the transporter signal to be reliable.  it was a problem Starfleet was not able to solve.  And so the cowlings size was increased slightly in order to accommodate a traditional turbolift tube.  Starfleet however still feels uneasy with this solution and has continued in its an attempt to solve the trans-turbo lift problem.

The final big problem with this design came from its confused role within the Federation Fleet. Even after the Borg Attack on Wolf 359, and the cubes subsequent defeat after almost achieving Earth orbit, many member worlds within the Federation felt Starfleet was falling too far from its scientific mandate, becoming a wholly militaristic force.

With construction beginning on a new class, the Sovereign Class, a very large, obviously tactically inclined starship design, these member worlds pushed for less militaristic designs within the Federation.  their thinking was that if Starfleet began to produce so many military vessels it could exacerbate already strained relationships with Galactic Powers such as the Romulan Star Empire and the Cardassian Union, leading to an all-out galactic war.

With these member worlds pushing for a step backwards, Starfleet began adapting these new designs to be more scientific in nature.  Classes like the Intrepid Class, which would be the first starship class to contain the newly invented bio-neural circuitry system, would suddenly be filled with scientific equipment and called a science/ tactical hybrid starship class.  This would appease the unhappy member worlds.

This solution worked out well for the Intrepid Class which had only begun being constructed, but in Steamrunner Class was already in full production with the Steamrunner itself being launched and many others of the class almost completely constructed.

To redesign the Steamrunner Class for scientific duties, as well as the reconstruction within the ship itself, could require years, something Starfleet was not pleased about one bit.  Already so much time and resources had been devoted to the class.

So instead of a redesign, Starfleet merely classified that design as a transport/ patrol vessel and slowed its production of the class.

By 2373 less then a dozen of this class had been constructed, however with the Borg once again returning to the Alpha Quadrant to assimilate the Federation, this handful of Steamrunner Class starships were able to finally do what they had truly been designed to do, that of combat with the Borg.

The class performed so well during the Battle of Sector 001, and with mounting tensions between the Federation and the Dominion, Starfleet and the United Federation of Planets reversed it’s earlier decision and stepped up production on this class, though at the time this was kept a relative secret.

However, during the Dominion War, this class would become a valued member of the Star fleet.  Providing tactical support in many of Starfleet and it’s allies major engagements.

Though the design WAS a departure from Starfleet’s standard, the design ended up proving itself, serving with distinction and valour and earning its place in Starfleet history…

Thank you for watching today’s episode of Truth or Myth, what do you think of the Steamrunner Class?  Did you like my non-canon interpretation of it?

What to help the channel out battling the Borg Collective? Then click HERE to become a channel Patron…