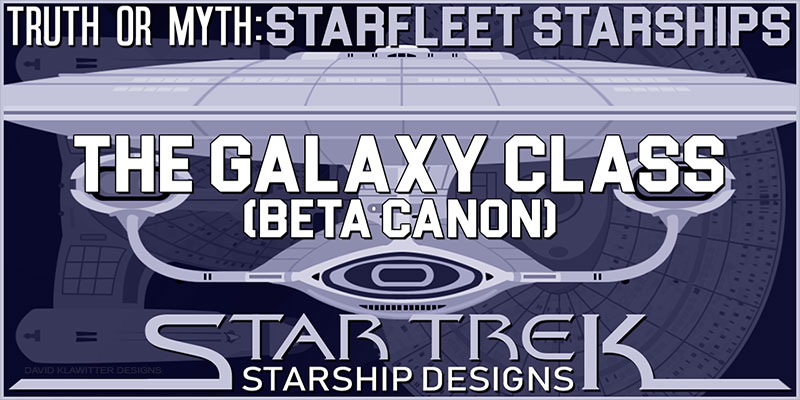 Hello and welcome to another episode of Truth OR Myth,  a Star Trek web series that normally looks at the Truth, or canon, information to dispel the myths that have surfaced on a given topic.  In today’s episode, we’re taking a look at the Galaxy Class of Starfleet Starships in an effort to better understand their place in Star Trek history.

When initially launched, the Galaxy Class of Starfleet Starships would be seen as the height of hubris on Starfleet’s part by many not only in the Federation but many of the non aligned and hostile species in the Alpha and Beta Quadrants.  And after a dismal showing in her early career, this class would receive a refit and update that would end up making her one of the most valuable starships in Starfleet’s star fleet…

This video is a little different than my other Beta Class videos, however, as there is a wealth of information on this class, at least on its early history.  So this video will focus on the classes later history, specifically after the destruction of the U.S.S. Enterprise – D.

As a result, though, most information in this video should pretty much be taken with a grain of stardust, and only considered a little bit of Star Trek Fun!   And so, with all that out of the way, let’s begin.

Starfleet Command was very unimpressed by the performance of the Galaxy Class of starships. Intended to be seen as a triumph of form and function, this class simply wasn’t living up to Starfleets expectations.  And after several disappointing engagements early on in its design lifetime, Starfleet decided to have it’s the core of engineers take another look at this class to bring it more in line with those expectations Starfleet was concerned about.

At the same time, Starfleet was making leaps and bounds in technological development, after its first major encounter with the Borg. Starfleet’s failure at Wolf 359, had forced the interstellar organization to pour many of its resources into technologies to defend the federation from future encounters with the collective, and this focus on technology was now paying dividends, 2 Specific breakthroughs were considered chief among them all, however.

The first was a brand new, much more powerful type of warp core.  This new warp core had been rated at approximately 3 times as powerful as the old style of warp core currently in the Galaxy Class and was far more efficient than the older model. The second breakthrough was that of Bio-neural Circuitry.

Mimicking the neural network of humanoid brains, this new circuitry would allow a starship to react far faster then any starship computer network could ever have done before.  And also allowed the starships computer systems to be far more predictive then anyone could have hoped for.  And so Starfleet Command decided that these 2 new systems should and would be added to the Galaxy Class to compensate for its lacklustre performance. And so Starfleet’s core of engineers set about redesigning the internal layout and ships systems of the Galaxy Class to accommodate these new advances.

Project Galaxy Refit began in 2368.  At this point, the new Warp Core Technology had only begun it’s testing phase in what was going to be a new class of starships known as the Defiant Class, and the Bio-neural Circuitry Systems had only been tested in a laboratory environment, and so Starfleet’s Engineers weren’t really sure how these systems would interact with each other. And so it was decided very early on, that the Galaxy Classes currently being constructed would receive only the new warp core systems, retaining their Isolinear Computer Technology, while future Galaxy Class starships would see those isolinear computer systems replaced with the new biotech systems.

This would allow Starfleet’s engineers to get a good grasp on the new engine systems and allow for further testing and development of the bio-neural computer components. Recalling the U.S.S. Galaxy herself to space dock, this starship would be the first to receive the new warp core design without any adaptations to this starship’s systems.  it was felt this approach would give Starfleet’s Engineers a better idea of what systems would actually need to be upgraded and redesigned in order to accommodate the new core. After it’s installation, the Galaxy then ran several tests and system adjustments in an attempt to make the core work as efficiently as possible, and after these tests, Starfleet quickly discovered many components would have to be redesigned from scratch or else the entire project would be a failure.

Going back to the drawing board, original class engine designer, Dr Leah Brahms, assembled a team to tackle these required redesigns head-on.  And after approximately a year of work, had completely redesigned the U.S.S. Galaxy’s engine components, readying the starship for another round of tests.

Meanwhile, the Bio-neural Circuitry team had also made huge leaps in their new computer systems.

Dr Alidar Daystrom, the first Daystrom to rise to the level of project head since his grandfather Dr Richard Daystrom had the institute on Earth named after him, had already created viable computer cores for the upcoming Intrepid and Sovereign Class starships, with the much smaller Nova and Akira Class starship cores well under development.  And he set himself on the task of creating a new bio-core for the Galaxy Class itself. Quickly realizing the Sovereign Class Core he and his team had developed would be a good starting point, he reconfigured some of its components for the Galaxy Class-specific technological systems and created the first bio-neural computer core for the Galaxy Class, and this new computer core went immediately into construction for the upcoming build of the second U.S.S. Yamoto of the class which was ready to begin construction.

During its second round of testing with the new Brahms Engine Components, the U.S.S. Galaxy performed way above and beyond what anyone had expected.  Shield strength, weapons output and speed testing showed an almost 300% improvement over the classes initial performance back in the early 2360s, and Leah Brahms was once again heralded as engine design genius. With very few alterations to the new Brahms Engine, the entire new systems would be slated for all future class construction, while Starfleet would begin making plans to refit all existing Galaxy Class starships.

Also during the time of these 2 technological developments for the class, Starfleet would have its engineers correct another problem for the class itself, that of its main bridge. Originally in the design of the class, Starfleet had streamlined its bridge consoles into what they felt was an efficient, easy to use, breakthrough design.  Unfortunately, the reality of the case was much harsher. Though in standard operations of exploration, the bridge consoles were adequate, during combat situations it had proved itself lacking, oftentimes having each station overwhelmed by the serious absence of system controls. And so Starfleet’s Bridge Designers set about the task of redesigning the Main Bridge of the class to allow the Galaxy Class Bridge far more control over its systems then had originally been intended.

Numerous bridge designs were developed, including 1 based on the original bridge for the class, but merely had consoles added and redefined for their functions. This modified bridge console would be the first tested, and in early 2371 this new bridge module would be installed on the U.S.S. Enterprise – D for testing. Unfortunately later that year, the Enterprise D would be lost saving the Veridian Star System, but the bridge module upgrades were considered a success, and Starfleet began installing these new modules on all it’s existing Galaxy Class starships.

A year prior in 2370, Starfleet had quickly realized a war with a newly found government in the Gamma Quadrant was inevitable, and thus, began ramping up production on the Galaxy Classes, which included all the new systems after the destruction of the U.S.S. Odyssey had sealed the original Galaxy Classes fate. And by late 2373,  when the war had been declared between these 2 powers, entire attack wings of the Galaxy Class had been constructed and deployed.

These Galaxy Class refit design Starships quickly proved themselves during the Dominion War, often times acting as command control vessels and turning the tides of several battles. However, after the war, Starfleet began to reconsider the class as a whole.  Many had survived the war and the question now for Starfleet was what to do with them.

You see, Starfleet’s starship design aesthetics had changed since the early 2360s, and as a result of the Galaxy Class, which had originally been intended as a jewel in Starfleets Crown, simply looked out of date when compared to other newer classes like the Sovereign, Intrepid and Prometheus Classes, which all seemed far more futuristic and in line with each other than the Galaxy Class. Attempts were made to change the class aesthetically to designs which were more along the lines of these classes, but the truth was the Galaxy Class itself was more of a relic of a different time, a constant reminder for Starfleet of an Era when they had let their ego interfere with the reality of Space Exploration.

And when the U.S.S. Voyager returned from her triumphant Trek through the Delta Quadrant, with new amazing technology and experimental developments they had undertaken, Starfleet decided to halt any further construction on the class in favour of a brand new Odyssey Class design that was being developed. This didn’t mean that the already existing Galaxy Class starship would be forgotten, however.

To speed up construction on the Class during the Dominion War, many of these newly constructed ships of the class had been left unfinished.  It’s internal areas devoted to families and daily life aboard a starship being seen as unnecessary were now an asset to the class. With rebuilding and an expanded extensive plan for establishing colonies throughout the Alpha and Beta Quadrants, this means that the Galaxy Class could be easily converted to Construction and Colony Vessel, and so the mission profile for the Galaxy Class was quickly changed.

The Galaxy class would lead Starfleets Charge in establishing it’s presence through out the Galaxy.  And once Starfleet had developed a viable Transwarp Drive System, once again this class would be in demand.  Building Starbases and ferrying Colonists to the outskirts of Federation space while simultaneously providing protection for those newly established bases and colonies.

This aspect of the classes mission profile would cement the Galaxy Class as one of the most valuable designs ever created by Starfleet, earning this class it’s place, in Starfleet history…

Thank you for watching today’s episode of Truth or Myth, what do you think of the Galaxy Class?  Did you like my non-canon interpretation of its design history?  Do you want to see more episodes like this one?  Well leave your comments in the section below and don’t forget to like the video and subscribe to the channel, hitting that little bell icon so you won’t miss a single video we release.

Want to help the channel with its refit and updates?  Then just click HERE to become a channel Patron…