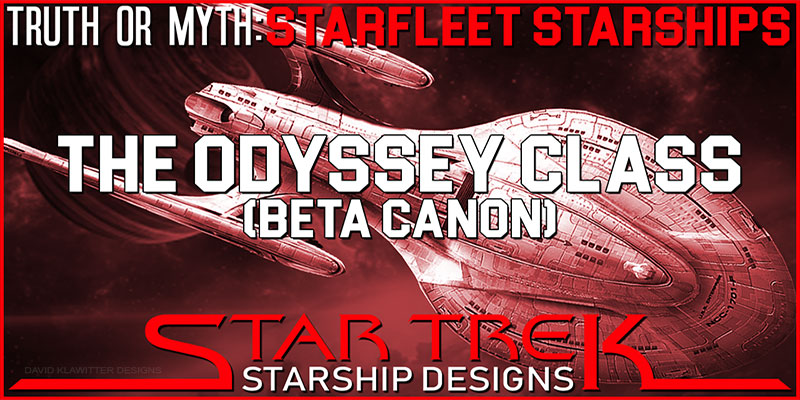 Hello and welcome to another episode of Truth OR Myth,  a Star Trek web series that normally looks at the Truth, or canon, information to dispel the myths that have surfaced on a given topic.  Today’s episode continues our journey through Beta Canon as we’re taking a look at the Odyssey Class of Starfleet Starships.

The successor to the Sovereign Class and the 8th Starship class to bear the name U.S.S. Enterprise, the Odyssey Class would be designed and launched to herald in a new Century of Exploration, Boldly continuing to go, where no one had gone before.

There isn’t a lot of information available of this class, so what I’ve done is thoroughly researched the Class through Beta Canon and filled in some of the gaps with my imagination, all to give you good Tri-naries a little bit to chew on about this fantastic class. As a result, though, most information in the video should pretty much be taken with a grain of stardust, and only considered a little bit of Star Trek Fun!  And so, with all that out of the way, let us begin.

Starfleet and the United Federation of Planet had made Huge technological advancements in the latter part of the 24th Century.  These advancements not only were showing the resourcefulness of Starfleet but also had made Starfleet and the UFP the biggest and strongest fighting force in the Alpha and Beta Quadrants. Gone were the days where the Klingon and Romulan Empires were considered a viable threat equal to that of Starfleet.  And with the Dominion’s loss of there war on the Alpha Quadrant, having their own forces sent back to the Gamma Quadrant, and the bulk of their forces dismantled by treaty, Starfleet truly began to look once again towards the future of Space Exploration.

With the 25th Century right around the corner, Starfleet Command wanted a new starship class to herald in this new Century and immediately set the task of designing this class of starship to their core of starship design engineers. Starfleet imposed a set of expectations and requirements on this new class, however.

Starfleet Command wanted a much larger and stronger class then had ever been created before.  It also had to be much faster having both a standard warp drive along with the new experimental Transwarp Drive that Starfleets Core of Engineers had been developing thanks to all the data and experiments done by the U.S.S. Voyagers crew while stranded in the Delta Quadrant.

A breakthrough into Transwarp speeds would be a major defining moment in Starfleet History, but success wasn’t assured.  in the 2280s Starfleet had experimented with this technology only to have the project fail, however with Voyagers data along with the resourcefulness of Starfleets Engineers, Starfleet Command felt confident that the breakthrough could finally be made.

The problem wasn’t really if the Odyssey Class could achieve Transwarp, but rather how the new Transwarp drive would be powered. There were 2 new Transwarp Cores that were developed. 1 was a modified standard warp core, while the other was a totally new design for the core based on Voyagers encounters with slipstream technology.

To this end, Starfleet commissioned 2 starships to be constructed as testbeds for the new technologies.  The first, the U.S.S. Odyssey herself would contain the Modified standard warp core, while the second, the U.S.S. Verity would contain the slipstream based core. The intent was to have both thoroughly tested in a year-long shakedown, and this testing would then confirm which core was more efficient and better for the class as a whole.

The Odyssey Class would also have the saucer separation abilities seen in both the Galaxy and Sovereign Classes, along with a new Aquarius Class Escort Vessel which would be docked at the rear of the starship. The reason for this extra vessel included in the design was due to Starfleet’s future plans for the class.

A breakthrough in Transwarp technology would mean that almost overnight the entire galaxy would be open to exploration by Starfleet.  And with this ability to explore further then anyone could have regularly gone before, Starfleet wanted the ability to establish bases and outposts quite quickly. And so much of the Odyssey design could be easily converted to cargo and colony carrier areas, allowing this class to act as essentially a Starbase facility while the smaller Aquarius Class Vessel would act as a patrol vessel to help defend Starfleets newest areas.

To improve the success of this class, it would also include a new comm array developed based on the Midas Array technology also created to communicate with the U.S.S. Voyager while she was in the Delta Quadrant. This new comm array system would allow far faster communication with Starfleet Command itself, allowing Starfleet to respond much faster to any potential disasters or attacks.  And if the breakthrough to Transwarp could be in fact made, Starfleet would then develop and install various different Transwarp drives in all its other classes so this would allow for rescue armadas to be quickly assembled and distributed.

Again, due to this classes mission profile, to be further away exploring and establishing Starfleets presence through out the Galaxy, the main bridge of this class would appear more as a Starbase command centre, being much larger and more extensive than any previous Starfleet bridge design. And also included in this bridge design would be another recent breakthrough in Starfleet Technology, that of 3d Starship Consoles. These consoles would display interactive 3d holographic interfaces for its crew to control the starship from.

And finally, the last major technological development to be included in this starships design was the Emergency Holographic Crew Replacement System or the EHCR. This technology, based on Voyagers EMH which had made the leap to the ECH would allow an entire holographic crew to assume control over the starship in the event of an emergency. During any situation where an officer at a station was injured or rendered unconscious, the Computer would automatically replace said crewman with a hologram specifically designed to control that station. And thanks again to Voyager’s EMH, and his quest for holographic rights, these holograms would, in fact, have more control over their own programs, though the fight for “Holo-rights” is far from over.

Finally, in late 2281, both the USS Odyssey and the U.S.S. Verity were launched to begin their shakedown cruises.  And during initial testing, both were able to achieve and maintain Transwarp speeds, though for only a limited time. By the end of the testing phase, however, it was clear that the modified warp core contained within the Odyssey was far more efficient than the one contained in the USS Verity, and so Starfleet recalled the Verity and replaced its core with the more standard model. And although seen a success, Starfleet Command felt further development of the Transwarp drive systems was required before this class was to head into full production.

As previous stated, both ships were able to reach Transwarp velocities, however, both were only able to sustain those speeds for a short limited time.  And until Starfleet could work out those bugs, making Transwarp far more stable for the class, travelling at Transwarp would be limited to emergency situations only. Starfleet would eventually solve the problem, and it would be decided that the 3rd Vessel of the class would be Starfleets Newest Flagship the U.S.S. Enterprise F. And this new Enterprise would lead the fleet into the new era of exploration for the United Federation of Planets.

After it’s core replacement, the U.S.S. Verity would be given to the newly-promoted Admiral Jean-Luc Picard to command the rescue armada from during the Romulan Crisis. After discovering that their sun was going to supernova, the Romulan Star empire reached out to the Federation for help with Romulus and its surrounding systems evacuation. Admiral Picard convinced Starfleet and the UFP to assist the Star Empire, and the U.S.S. Verity began patrolling several of the systems surrounding Romulus, making evacuation plans for those worlds, along with negotiations for resettlement colonies on other worlds within the Romulan Empire. And to facilitate better relations between the Star Empire and federation, along with allaying Romulan fears, a Romulan Lieutenant and Tal Shiar agent, Tajuth was assigned to the U.S.S. Verity under Picard’s command.

In 2283, the Verity along with a small fleet of Federation and Romulan Starships were assigned to the evacuation of Nimbus III. The Tal Shiar, however, would end up taking over the mission, which leads to the massacre in Paradise City, a massacre which would be leaked to the Federation News Service and disgust most of the federation member Worlds, furthering an already growing divide between the federation and the Star Empire. In early 2385 the U.S.S. Verity was sent to Yuyat Beta on orders to evacuate its population of 10,000 Romulans. Once there. Picard was shocked to learn there was a native population of about 5 million people, and Admiral Picard refused to evacuate just the Romulan Colonists.

When the Romulan Governor of the planet was told of Picard’s refusal to evacuate only the Romulans from the planet, the governor arrested Picard and briefly took control of the U.S.S. Verity. Regaining control of the ship, the verity was able to fend off the attack of a Tal Shiar dreadnought operating outside the purview of the Romulan Senate with the help of 2 D’deridex Class Warbirds loyal to the praetor. Unfortunately on April 5th, 2385, the synthetic lifeforms working at Utopia Planitia began a devastating assault on the construction facility destroying the rescue armada being constructed there, and as a result, the United Federation of Planets would end up pulling it’s support from that project, and refuse to assist the Star Empire any further.

Admiral Jean Luc Picard and the U.S.S. Verity would be recalled to Earth and Admiral Picard would resign from Starfleet in protest, and leave the USS Verity vowing never to return.

Though this is one of Starfleet’s newest classes, it’s importance to the federation can not be over stated.  The doors this class will open up in the future of exploration and uniting the Milky Way Galaxy has already made the Odyssey Class the shining Jewel in Starfleet’s new crown, cementing this classes place, in Starfleet’s history…

Thank you for watching today’s episode of Truth or Myth, what do you think of the Odyssey Class and its history?  Do you hope they make this class canon in future Star Trek series?  Well leave your comments in the section below and don’t forget to like the video and subscribe to the channel, hitting that little bell icon so you won’t miss a single video we release.

What to help this channel finally reach Transwarp? Then just click HERE to become a channel Patron…