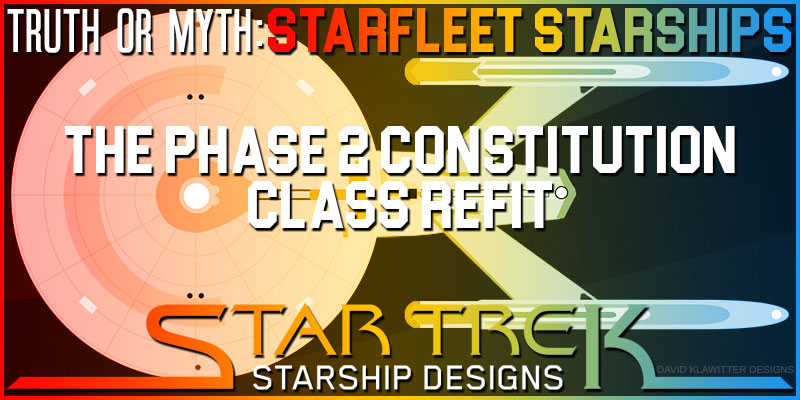 Hello and welcome to Truth OR Myth,  a Star Trek web series that looks at the Truth, or canon, information to dispel any myths that have surfaced on any given topic.  In today’s episode, we’re taking a look at the Phase II Constitution Class refit, a design that never was, in an effort to better understand it’s place in Star Trek History.

As Star Trek began its resurgence after the Original Series was cancelled, Paramount was planning on creating a new network that would have a brand new Star Trek Series, code-named Phase II, as it’s flagship series.  This New Star Trek series would see a New Refit Enterprise grace the scene, and today, that’s the Star Trek design we’re going to talk about…

In 1977, Paramount Pictures President Barry Diller began working on the idea of launching a new, fourth television network, called “Paramount Television Service” or  PTVS for short. Following the rapid growth of the Star Trek fan base, and a general growing interest in science fiction programming, Diller decided to launch a new Star Trek television series as the network’s flagship program, covering a second five-year mission for Captain Kirk and the crew of the starship Enterprise.

Full production began on the series that would contain 13 episodes along with a 2-hour premiere pilot.  In Thy Image would be this pilot and that script would ultimately be reworked into the Star Trek Feature Film, “Star Trek: The Motion Picture”.

Set construction, costume design was in full swing.  The entire main cast of Star Trek the Original Series was slated to return with one except, Leonard Nimoy. Having some pretty big issues with Roddenberry, Nimoy opted out of rejoining the Trek Family, so instead an actor by the name of David Gautreaux was cast to be the new FULL Vulcan science officer named Xon. Xon would differ greatly from Spock, instead of trying to understand humanity by trying to develop human emotional traits.  As a result, in this iteration of Star Trek, Xon and Doctor McCoy would end up becoming the best of friends.

Screen tests were shot, the model constructed for the new Enterprise Constructed and everything seemed to be going swimmingly… That is until late July of 1977, when Gulf+Western head, Charles Bluhdorn, thought the project would lose way too much money due to lack of interest by advertisers and the entire project would be scrapped. Of course, Star Trek didn’t end there, and in order to recoup some of the money already spent on the new network development, Paramount decided to continue to work on the new Star Trek Pilot, opting to make it a television movie of the week.

But when Star Wars blazed across the seen, Science Fiction Movie making would be changed forever, and the made for TV movie would become a Feature Film, scraping MOST of what had already been developed and Constructed for the show in favour of brand new movie quality sets and equipment…

As constructed, the new starship Enterprise would end up with very similar lines to that of its movie counterpart.  Unfortunately, though the New Enterprise Model, Designed by the Original Series U.S.S. Enterprise designer Matt Jefferies, was deemed unusable for a feature film as it simply didn’t have the detail required for the big screen.

This enterprise would remain approximately the same size as the original series Enterprise, with a length of about 290 meters and a width of 130 meters.  It would have 22 decks and be crewed by about 450 crew members.

The design itself would hold the original Shape of The Constitution Class although some of the lines would be changed to better fit in some of the new tech this design would carry. Starfleet’s recent development in Warp Drive saw the invention of the Vertical Warp Core.  This new Core would be incorporated into the design and the old warp engine nacelles and pylons would be detached and replaced to conform to this technological breakthrough. The nacelles would lose their tube shape in favour of a rectangular box design.  There would be glowing Bussard Collectors on the front of the warp engines harking back to the Original Series Enterprise design.

Her standard safe cruising speed was increased from Warp 6 to Warp 7, and her emergency Maximum Speed would be increased from warp 8 to a hypothetical Warp 12, something which would have been tested in the pilot episode much like the speed of the Galaxy Class was tested in the pilot for “Star Trek: The Next Generation”. Unlike the Constitution Refit we actually got on screen, this design would see far less external and internal changes, something that would have made this design a much more believable progression then the one seen in the motion picture., The refit of this Enterprise would have been a major plot point of the pilot…  And the audience would have actually gotten to see a lot more if it actually being completed, and like the TMP refit, this design would still take 18 months of redesign and construction to complete.

Tactical systems were improved as well to take advantage of the Warp Core.  Phaser Banks,  10 banks with 16 emitters, had a major increase in power thanks to being channelled directly through the new warp drive. Though more efficient, this did mean that ships phaser weapons wouldn’t function if the Warp Drive was damaged or offline, a New  Photon Torpedo Launcher would be installed to the connecting plane of the Neck and Secondary Hull but unlike the TMP Refit would only contain 1 tube.

Ships shields would also be improved, again thanks to the increase in power availability the vertical warp core provided. The registry number NCC-1701 would also be added to either side of the secondary hull.  And the original Enterprises decal on the secondary hull would remain the standard. The Main Deflector would also become an enclosed unit, though in this design it would remain the copper-toned style of the TOS Enterprise.  It would still be a variable output deflector design, however, just with no indication of increased strength.

Another advancement in the class was to be the addition of a force field system on the shuttlebay.  This would allow Smaller crafts to exit and enter the bay while the doors were open without loss of atmosphere.

Bridge design would be changed from the modular, connecting consoles of the original design, basically looking like what we saw in the motion picture.  However, the Captain’s chair would be very different having a more 70’s rounded feel and there would be large spheroid style consoles placed at various points on the bridge. The main colours of the bridge and the rest of the ship were also to have changed from the standard  Primary colours of the original series to that of much more muted and neutral tones contrasted with the starkness of white. The bridge module on the outside would resemble that of the Original Series Enterprise design but with one significant change.  Now 2 Turbolift tubes would be showing as the bridge was to have gained an additional entry point for the crew.

Though weapons and defensive systems could still be controlled by the helmsman, a dedicated console for weapons control was to have been added to the bridge, where a tactical officer would be stationed going forward.

Sickbay, science labs and Engineering were also to have been completely redesigned.  Engineering, obviously to accommodate the new vertical warp core and ALL other areas of the ship were redesigned to an even more 70’s SciFi feel.

The Rec Deck would have been a much larger space this time around, and have a bunch of different do-dads to make it appear as a state of the art recreational facility…  However, in this new design, this rec-deck could have only been a single level complex. A redesigned larger Botanical Gardens or Arboretum would also be included in this design though not in the secondary hull as seen in TMP refit.  This time in the saucer section, where crew members could take a walk through this area observing different flora and fauna collected by the ship and allow various romantic drama to unfold there.

This class was to be a beautiful triumph in Starfleet Engineering, seamless merging form and function that would reinforce the Constitution Class as the Jewel of the Starfleet’s Crown, making them the most coveted Class of Starship in Starfleet History.

And for me, it’s unfortunate that we didn’t get this design…  I would have loved to see anew series in the ’70s that would have connected the lineage between the TOS Enterprise and the TMP Enterprise in a more believable fashion.

That being said, however, the “Star Trek: The Motion Picture” design was superior in every way, it’s a true beauty to behold.  But there’s always something to be said about this particular design, a design that would become a stepping stone to the TM design, and should never be forgotten, in Star Trek History…

Thank You for watching today’s episode of Truth OR Myth.

What do you think of this Phase II Constitution Class Refit Design?  Do you wish we had seen this design in canon?  Well, Leave your comments in the section below.  And don’t forget to like the video and subscribe to channel, hitting that little bell icon,  so you won’t miss a single video we release.

Want to help the channel out with its phase II refit? Then just click HERE to become a channel Patron… , thanks again for watching, live long and prosper…