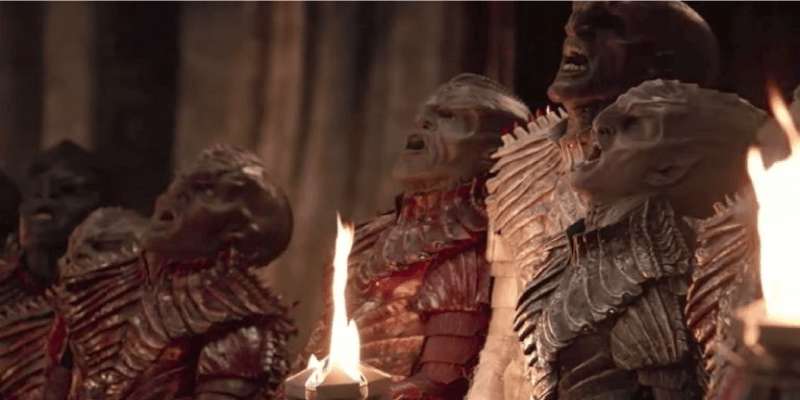 Why not? It isn’t the first time. The big leap was made from TOS to TMP, and in the movies that followed, each further iteration had greater changes. The Next Generation ‘cemented’ the look of Klingons for the next few shows, and that look was incorporated in the later movies…along with a few pretty drastic variations….remember General Chang? And then you had the big Revamp in the new films by JJ Abrams…

“Don’t get me started on that! That is where they REALLY screwed up! And now this stupid STD show is giving us a rainbow of those fake JJ ‘Blingons’!”

Well, what’s wrong with a little variety? Those old Klingons covered a pretty good range of skin tone as well, and the ridges, while different, are reminiscent of General Chang on Steroids…his bigger, meaner cousins.

“That ISN’T how Klingons are supposed to look!”

Are you telling me that all Klingons look alike? That sounds a bit…racist.

“I’m not racist! Some of my favourite characters are Klingons!”

Yeah, right…heard that refrain before… ‘I can’t be racist because I have friends who are—’ “don’t go building some crappy strawman just to make a lame insinuation against star trek fans to open your damn article! I’m getting really tired of you taking every chance you can to take little shots at Trekkies when you write these things!  Yes, there were changes in the past, but they were explained in Canon. They made sense!”

OK, fine, I won’t take a shot at the fans…this time. (though let’s face it, it has been acknowledged that the REAL reason Klingons changed in TMP was because of the bigger budgets and new F/X technology allowed them to do a lot more than just face paint and hairy eyebrows….Star Trek has a decade’s long history of altering and updating the looks of F/X just because they can.) I will simply ask if you have ever heard the old story of the seven blind men and the elephant, and ask you how much we really know of Klingons, and if we have only scratched the surface of their depth…

Klingons are strong. Strong, fast, aggressive…Starfleet officers are trained in various disciplines of hand to hand combat, and in ancient military tradition, physical fitness and conditioning are valued as much as academic achievement. Starfleet officers in the field are expected to maintain certain standards of physical performance…but I recall a young Starfleet officer who got into a barroom brawl with Klingons, on Deep Space Station K-7, and couldn’t even drop one.  But most of what is known about Klingon Physiology didn’t come to pass until the 24th century…during the 23rd century, the Era of Captain Kirk, Klingons were ‘the enemy’, and that seems to be all the Federation cared to learn.

By the 24th century, though,  we learn a great deal about Klingon Physiology. Much stronger than humans, with an aggressive nature that is almost primal with its ferocity, tempered by a code of combat that keeps them focused on honour and discipline and skill, rather than berserker fury.  We know Klingons are intelligent; at least as intelligent as humans if not more so, because the handful of Klingons who went through Federation training did well enough at the academy to succeed despite the deep-seated human prejudices that humans had who wanted to see them fail.

Biologically, we know Klingons have an insanely overpowered ability to survive wounds with layers upon layers of redundancy built into organs and tissues. The Klingon “Rite of Ascension” involves applying ‘painsticks’ to the Klingon, and this is a weapon that can be fatal to a creature that weighed two tons…redundancy and durability makes a Klingon capable of surviving such a weapon.  An experimental spinal surgery that should have been fatal was successful on a Klingon patient because of the Klingon body’s resilience and redundancy.

Klingons accelerate to maturity very quickly. A normal human takes two decades to reach adulthood; Klingon children reach adulthood in half that time, as evidenced by Alexander, son of Worf. As a survival trait, it’s a good one…some species prefer reproducing in great numbers ensuring that while many offspring die, enough will live that the species continues…but other species survive infancy and childhood by becoming strong enough that predators don’t stand a chance.

And this strength, this adaptability, it isn’t just on the level of the organs and tissues, but goes all the way to the cellular level, with Klingons having a boosted autoimmune system (even their immune system is a brutal killing machine) capable of fighting off a disease as devastating as the Phage.

Based on what we know from some pre-federation encounters with Klingons in the mid 22nd century, this adaptability is even beyond the cellular level…it goes all the way to the DNA. The so-called ‘Augment Virus’ was an attempt to incorporate the DNA from the species Homo Sapiens Superior, and it altered Klingons, made them retain their strength and even enhance it a bit, enhancing the aggression…and the Klingon DNA altered to create the ‘flathead’ look later encountered by Captain Kirk. Based on results of some of the most advanced medical science at the time, it was known that interspecies hybrids have a very slim chance of being viable….but Klingon DNA meshed flawlessly with human Augment DNA…a trait from the Klingon genome.

So, Klingons can go from ridged warriors to flat-headed savages easily, indicating that because of their adaptability, they can quickly adapt to fit a variety of evolutionary niches.

The ridges, of course, are what we want to talk about.  While it is easy to think they just have a really bony skull, there’s more to it than that. Starfleet Lieutenant Barclay, a walking catastrophe, inadvertently generated some kind of ‘de-evolution virus’. When Worf, the Klingon, was exposed to the virus, dominant aspects of a primordial ancestor of his species became more prominent…and we learn that Insects are a big part of Klingon evolutionary development. So those ridges aren’t just a skull; it shares traits with an exoskeleton. And insects are a species that demonstrate a rather intense capacity for change…larva to pupae to butterfly, or the various phases of the Assassin Beetle.

Just consider the variation among, for example, spiders….creatures that were all from the same planet. and sure, variation among species through evolution can take millions of years, on earth, but with an extremely adaptable species that easily incorporates physiological changes, such as Klingons, such variation and adaptation can take place over a few generations….spread them to planets with varied and diverse ecosystems and environmental conditions, and there could be a LOT more variation in Klingons than there is in humans.

During an interview with the creative minds behind Discovery, they talked about the new Klingon design, acknowledging that they were working to fit into Canon, to make sure the Klingons they designed made sense, not just plotwise but from a scientific, biological point of view. Read this summary at http://trekmovie.com/stlv17 … notice that the phrase ‘Apex Predator’ is applied to Klingons, and how they explain that the ridges are not just a carapace or skull, but are more evolutionarily functional, an intrinsic part of Klingons, and part of their heightened sensory abilities.

So, we’ve had fifty years of shows showing us just how diverse, variable, and adaptable Klingons are from a biological standpoint…and we know the Klingons have an empire that is large enough to rival the federation, which means they have an awful lot of planets providing conditions that put that adaptability to the test. Klingons are still Klingons, still who they were…but now, we are just taking a more in-depth look at everything they are, going beyond the tiny little sliver of what we know.

so, remember, there are 50 years of canon, telling us of a history of a few thousand planets covering several millennia of history. Can you really say what we know is the whole picture?

Discovery Vs The Orville