“A minority female lead is a groundbreaking—“
no, plenty of folks are going to cover that.

“The F/X are CLEARY, not pre-TOS Prime—“
Yeah, let’s skip that can of worms.

“The Klingons are—“
I have absolutely no idea, heard thirty theories, will hear thirty more. (Looks cool, though.)

“the ship looks like—“
that was done, redone, overdone, then done again during the first teaser.

So, a thousand blogs, ten thousand opinions, a hundred thousand fan theories (some of which are good, and some of which…well, folks, please have your homes tested for lead paint.) What can I say about the new Series? There are a lot of folks who are much smarter than me and very clever analysing all the little details…and there are folks who are not as smart as me but much louder making assertions and assumptions based on no evidence, or two seconds of footage, or tinfoil hats.  How can we write about Star Trek Discovery when we haven’t seen it yet? We can talk about what we know about it: it is Star Trek.  But what does that mean?

Let’s go for a little trip down memory lane.

I never Discovered Star Trek. the birth of Star Trek came about a decade before I showed up on the scene. So, unlike a lot of fans, I don’t have a ‘moment’…Star Trek was something my family liked, so it was always on in reruns as I grew up. So, I don’t have a cool story about my first experience with Star Trek. (It wasn’t even the first non-cartoon movie I saw in cinemas…I ended up seeing “Ghostbusters”, and then “Indiana Jones and the Temple of Doom”, and then saw “Search for Spock”.) But there were plenty of firsts.

I remember being 15 minutes late for the Premiere of TNG. I was at my grandmother’s in Texas, and it was Sunday afternoon that it was slated to air (the wonders of a show jumping directly into syndication…) I had gone to church (because that is what you do when you stay at Mamaw’s) and hung around a bit to play with kids my age, let Mamaw kibbitz with the preacher, that sort of thing, and then she said, “Well, let’s go home so you can watch that new Star Trek show you keep talking about.”

so, I missed the beginning. My first sighting of the New and ‘improved’ Enterprise, redesigned to be more futuristic and the like, was as it soared majestically in orbit over whatever alien planet they were visiting to see some station called ‘Farpoint’. I liked the lines of the hull and the glowing blue of the nacelles that swept so smoothly and majestically up from the hull…and found that the teeny tiny saucer on the Enterprise looked really out of proportion and stupid. “what have they done to my ship?!?” I cried, aghast…then the Enterprise flew off and reconnected with the saucer section, and suddenly, not only did the ship look MUCH better, it had a cool new feature with the detachable saucer. The lesson here: sometimes we can be hasty with our gut reactions. Not only did the first episode of TNG get better, but over the years, the series as a whole lot better. 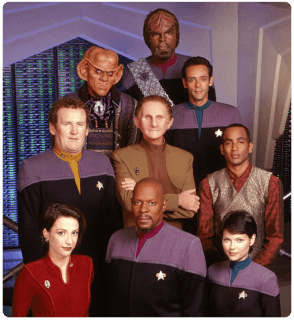 I remember being less than thrilled about Deep Space Nine. This was the golden age of syndicated TV: right before all these new networks popped up and really defined themselves, you had outfits doing all sorts of great sci-fi/fantasy shows: Time Trax, Babylon 5, Kung-Fu the Legend Continues, Hercules….Star Trek deserved a spot in among all the PTEN fare. But…a Space Station instead of a Starship? But then I read the TV guide articles (Sure, the internet was around back then, but not exactly commonplace) and they talked about the mysterious wormhole to the other side of the galaxy, and how O’Brien would figure out a way to make the whole space station move….so I thought, ‘ok, they fall in the wormhole, and drift around from place to place in a mobile station, far from home, more resources than a Starship, but less mobile…put the crew to the test beyond the final frontier…’ of course, the actual show played out a bit different than the concept I had in my head, and while I thought *MY* idea was cooler…DS9 ended up doing great and gave us a fascinating Trek series. The Lesson Here: fans tell great stories….but those are not the ONLY story. Someone else—especially guys whose stories are good enough that they get PAID to tell them—are ALSO going to be good.

I remember Voyager. Back to a Starship now, but on the far side of the galaxy (I guess those network execs listened to my cool idea about how they should have done DS9…?) TNG really shook things up, gave us a DRASTIC shift away from TOS in look and feel…it was still Star Trek but was definitely a ‘strange new world’. DS9 gave us a different kind of story altogether, again going new, with new life and new civilisations…and it laid the groundwork for building that ephemeral thing called ‘canon’.

I remember Enterprise. A reimagining (a ‘reboot’ before it was even a word) going back to the beginning, restarting everything, giving the tired old 1960s tech an upgrade and facelift, while still holding true to the core of Star Trek. It somehow managed to avoid most of the catastrophic clichés and hackneyed tropes that ruin prequels, staying fresh and imaginative, while simultaneously screwing the pooch with fan service and getting strung along some lousy storylines because that was what fans really wanted to see. The fan base lost interest, the show overran its costs, the franchise was fatigued….

for whatever reason, the show did not do well and was cut down before its time. When it had a bad episode, it was one of the WORST episodes of any Trek in the 50-year history of the universe…but when it had a good episode, it was some of the absolute BEST Star Trek EVER. The lesson here: don’t listen to fans. Star Trek is not what it is because the fans made something of it; the Fans are what they are because Star Trek made something of THEM.

I remember Kelvin.  Go back to the beginning (the REAL beginning, not some silly prequel story), give us Kirk, Spock and the OG Masters of Sci-Fi. But don’t give us papier Mache Monsters and reused Andy Griffith Sets. We live in a new era, where technology and cinematography allow us to push the envelope visually, create a look that still captured the spirit of Trek, but wrapped it in all the new advances that we had made to make it feel like the future again. (Because, let’s face it, here at the dawn of the 21st century, much of our tech has already greatly surpassed that which TOS envisioned for the future centuries hence…) the heart of Trek is still there, the soul of Trek shines through…Star Trek will not become dated or archaic.  The lesson here: the journey is just beginning. 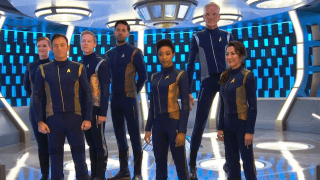 For all of you who are fans, take a minute and name the five best directors/writers/producers that worked on Trek. No matter who you are, somehow, by some miracle, at least one name from your list is part of the Dream team building the new Star Trek series. The cast is made of A-list actors and B-listers who damn well ought to be A-listers.  The ship…the ships, the aliens, the imagery….they pored over the archives, selected bits and pieces from the greats of Treks VFX history….pulling from TOS, TMP, the Maroon movie era, TNG era, etc etc etc. this is Star Trek, through and through.  The stories, the characters, the actors….all the instruments are in play, and the conductor is about to begin, and a new symphony will resonate through the internet and the rest of the galaxy.

We are going to see some old favourites reborn, revitalised, improved and explored in greater depth. We are going to see new and amazing things. We are going to wax philosophical about sociological and cultural issues through allegory both internal and external and ponder some of the ‘meaning of life stuff’ along the way. We are going to get some of the ‘the world can be a better place’ commentary on contemporary humanity as it contrasts with this vision of a better future. We are going to get some god awful episodes that will leave you wondering if the writers were drunk or if they just lost a bet (if I ever become a successful novelist, I am bound by such a drunken wager to write a story about a worm that poops platinum…I know how painful a bad bet can be) and we are going to get some episodes that will be so magnificently crafted that you say “This. This is what Star Trek is.”  We are going to get other things that I can’t even begin to think of….and when all is said and done, we are going to get at the very least two or three Years of Discovery….and we will get another 50 years of Star Trek. (and in five or ten years, I’ll write another blog about Discovery, and be able to fill in this ‘I remember Discovery’ section with all that we have learned, and loved, and hated, about Discovery…but I look forward to watching the show, and discovering whatever it has to offer.)