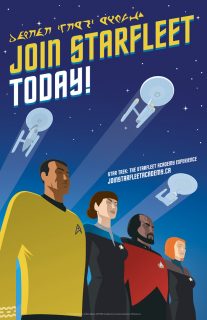 I probably should have had this article done a couple of weeks ago, but things have been pretty hectic lately. It is Election Season here in the US, and that means our decisions determine the future of civilization as we know it.

Politics in Star Trek is, at best, a dodgy topic.  In most places on the internet, Trek talk tends to have rules about avoiding conversations of politics and religion, because the world we live in is a divisive, petty, spiteful place, which is, in theory, antithetical to the core values expressed by Star Trek, and folks are incapable of discussing things reasonably. (I am talking about BOTH sides of any kind of either/or mentality; the blame does not fall solely on [insert disliked political ideology here]… eventually, a group of fans start going into McCarthy-esque witch hunts, demanding to know your political affiliations, to determine if your view is ‘acceptable’, or if you need to be blacklisted, and it all boils down to ‘think like us’, and the idea of IDIC is ignored. )

“Now wait a sec,” you are saying. “Star Trek talks about politics a LOT. It is relevant.”  But here’s the thing: Star Trek almost never talks about politics. We know next to nothing of the political side of the Federation, other than that it seems to be some kind of hybrid between the U.S. government and the United Nations, where, in one episode, the government of the Federation represents the ENTIRE Federation, and in the next episode, the Federation is a place where various member governments have their own internal system of laws and just show up at federation meetings for issues that are of mutual concern.  (And, apparently, representatives of enemy states, such as Klingons or Romulans, can address the Federation legislators and its military commanders directly, rather than through the Diplomatic Corps….) They play fast and loose with politics.

However, here’s the thing: Star Trek talks about the issues. And political parties (or action groups, movements, or whatever a group of like-minded folks call themselves) ALSO talk about the issues. So there is this odd overlap, and it looks like Star Trek has a ‘political agenda.’  Star Trek doesn’t have an agenda; it isn’t ‘picking sides’ or ‘indoctrinating’ or whatever you want to call it. Trek is, as it was since the beginning, an action/adventure show with some basic questions of philosophy and ethics thrown in and examined to give it a bit of ‘depth’.

“Ah, but this episode showed that [particular stance on an issue I support] is the right choice, and since [political party I disagree with] is opposed to that view, clearly they are wrong and I am right…Star Trek obviously endorses [political ideology I support].” Ethics in Star Trek is not built on moral absolutes; ethics are situational, fluid, and sometimes inconsistent or outright contradictory. The ‘good’ decision in that episode is contradicted by some other episode where the crew goes another way to do what is right for that week.  And some of the best Star Trek episodes are the ones where the ‘right’ answer is not clear-cut or obvious, where concepts like ‘right’ and ‘wrong’ are not simple, straightforward things. “In the Pale Moonlight”, “Tuvix”, “A Private Little War”, “I, Borg”…. 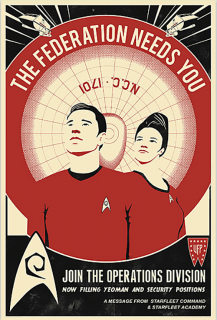 But, over time, a pattern emerges, right? They DO lean to one side or the other a bit more, don’t they? Yes, they support racial equality, much as the political left does. But they also support concepts that align with the politically right-wing view of things… for example, a re-imagining of the principles of ‘Manifest Destiny’ as expressed by right-leaning political groups in the 20th century.  TOS is possibly the best example of this; the often examined metaphor of the Federation/Klingon relationship mirroring that of the US and USSR; that Democracy must triumph over Communism, that our way is right, even if we have to fight to prove it. That kind of Right-wing Supremacy won the cold war…and seems one of the most important principles of the United Federation of Planets, where a great many ‘wrong’ choices are defended or rewarded if they result in preserving the Federation way of life….

There is an odd confirmation bias where folks start with believing their political leanings are the right ones, and an opposing view, no matter the reason, is wrong, and evil. And in spite of Star Trek spending 50 years trying to teach us that such divisive ways of thinking are wrong and foolish, still we persist, and the fighting and misery in the world pushes on…we can blame, of course, the folks in [insert disliked political group] because if they would just wise up and LEARN, and set aside their selfish, ignorant belief in their flawed system, the world would be better, obviously…and we make such statements blissfully unaware that thinking like that is why WE are part of the problem.

And what of the Federation? It is put forth as a near-utopian society, obviously founded on [insert preferred political system]’s ethical philosophy, so clearly, our way is the right way to make the world great again, to build that better tomorrow, right?  Well, I could go off on a pretty long tangent about how that ‘utopia’ has a pretty sinister streak running through it, that the ‘utopia’ is a shallow façade of the kind of Orwellian nightmare where the State insists it is Perfect, and to question the state is treasonous and evil and must be punished…but ‘Why the Federation isn’t as great as it thinks’ is a topic for another time. Instead, I’ll tell you which political ideology that exists today is closest to that endorsed by Star Trek.

Except…it turns out that NONE of them are any damn good. Gene Roddenberry, Mr. Optimism himself, the man who envisioned a perfect future of harmony, peace, and enlightened self-improvement, made it pretty clear that ALL current political systems were the reason the real world was so screwed up. To get to that perfect future, all the old systems needed to be torn down, by the Despots of the Eugenics Wars, by Colonel Green and his nuclear Armageddon, by the total collapse of modern civilization…your political views, no matter how good you think they are, are part of the problem, not the solution. Roddenberry envisioned that perfect society rising from the ruins of a cataclysmic World War that wiped the slate clean, and let the survivors start over, cherry picking what worked from the various flawed systems we have today.

So, stop blaming people who support [insert disliked party here] unless you can acknowledge that [insert liked party here] is also an evil regime that will doom us all…you don’t get to that future of unity and harmony if you blame the other guys. We only get that future if we accept that the other guys are us.  Your politics are ethically challenged, flawed, divisive, and judgmental, and are not going to create the future Gene Roddenberry envisioned.

In other words, when it comes to politics, no matter who you are, Star Trek shows that you are wrong.

Want to read more on the subject of “The Politics of Star Trek” you can read more at the following links.

Discovery’s Timeline/Universe?, We Asked The Writers…