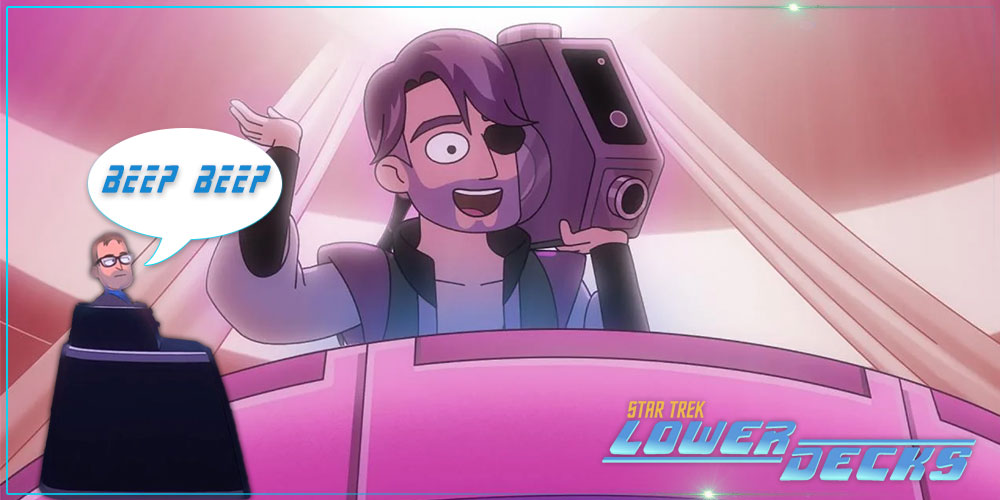 It’s the halfway mark of the second season and of course, Lower Decks knew to mark the occasion by making me scream and howl with laughter all the while telling a very heartwarming story.

We begin with the Cerritos bridge crew shepherding a Doopler ambassador to a starbase. But they’ve spent all this time walking on eggshells because Dooplers duplicate when they are anxious or nervous, thus incredibly sensitive and easy to set off. This particular Doopler is voiced by the always amazing Richard Kind who seemed to be having a total blast as the Doopler eventually starts to uncontrollably duplicate when he walks in on Captain Freeman making some less than pleasant comments. Setting aside that there should really be alarms for when non-crew people just show up on the bridge, it’s completely hilarious to see the crew attempting to calm the Doopler down, leading to Shaxs at one point just resignedly exclaim that he can’t do anything because the crowd has him.

Eventually, Freeman has just had enough and starts to yell at the Doopler to basically pull himself together, and it works! Whether you want to lay that down to Freeman’s mom voice or Dooplers form back when feeling affronted, it’s really amusing to see Freeman telling the crew that even though they are Starfleet and generally are kind, they really have to give the Dooplers a piece of their mind in order to save their ship. And Dr T’Ana just takes that order and fully runs with it, swearing up a storm that’s almost entirely bleeped out. I seriously really love the way Lower Decks deals with profanity and its artistic usage of bleeping. And Dr T’Ana is the best character to really play that up with because seriously, we all know that’s what all our cats would sound like if they could speak our language.

But settling the issue with the Doopler isn’t just about saving the ship, Freeman wants to take her bridge crew to the big after-party of a Starfleet Command conference. After having taken part in the battle with the Pakleds at the end of last season, Freeman’s journey so far has been about wanting her and the Cerritos to be recognized, to show that they could do more than they are usually assigned, and they deserve respect. Unfortunately, even a wonderful and heartfelt speech given by Freeman in defence of her crew wasn’t enough to get them into the party.

Now, I know that some will likely take issues with Starfleet seeming to have exclusive parties and instituting almost a class system of importance when it comes to ships and how they are recognized and treated, but I really love this take. Not because I think Starfleet should be portrayed badly, but it feels realistic that the future isn’t always so perfect, since that means we still have room to grow and learn and change. And isn’t that really the message of Star Trek at the end of the day? That it’s not about the end goal or result, but rather the journey. And really, since we later find out that even Spock and Kirk didn’t make it into the party and they were in command of the Enterprise at the time, it makes the Cerritos crew being locked out of the fun less about class status between cool ships and less cool ships, and more than Starfleet maybe has some weird party-list requirements sometimes.

Now, it’s not just the Cerritos bridge crew trying to get to the party, Mariner and Boimler also want to as well. Because let’s be real here, who wants to just stack crates from one side of the room to the other. Even I didn’t have a back problem, such a task would be incredibly tedious. Mariner concocts a plan for Boimler to pretend to be his transporter clone twin since William Boimler serving on the Titan would have gotten an invitation. And then uses the chaos of the Dooplers to beam the two of them onto the starbase where Mariner’s somewhat mysterious past has her running into some old friends. Now Malvis the Mizarian’s place is a treasure trove of easter eggs but it’s the Data and some Lore bubble bath that had me chuckling. Apparently, he wants Mariner and Boimler to deliver that before he tells them where the party is. However, our Lower Deckers soon get stopped by starbase security and discover that the bubble bath was actually hiding illegal Klingon weapons.

Malvis is still pi*sed that Mariner stranded him on Ceti Alpha IV, a planet familiar to all of us with the knowledge of the whole Khan situation. So, Mariner does what Mariner does best, make one hell of a getaway as she and Boimler lead the security people on a wild goose chase all over the starbase. I laughed as an Aurelian couple living in the aviary seemingly regrets moving there as Mariner and Boimler crash through. But what got me howling with laughter was that during the car chase, they run into someone in the wheelchair similar to the one Pike would have in “The Menagerie”, but the person sitting in it was clearly made to look like current Star Trek overlord Alex Kurtzman, paired with his usual hairstyle and black glasses. This is by far my most favourite easter egg, because it was funny and just totally unexpected!

Eventually, Mariner and Boimler get to the party but Mariner isn’t allowed in because she’s from the Cerritos, and this deepens a growing divide as Mariner gets frustrated with Boimler for abandoning her again. Now, some might say dredging this back up seems strange after they’ve dealt with it when he returned. But they never really dealt with it, they brushed past it and joked around about it. However, feelings sometimes take time to build and even when we think we’ve gotten past something, all it takes is an incident to bring those feelings back up. In this case, Lower Decks took the realistic route to portray those emotions are not locked into one episode and perfectly moved on, sometimes it can be messy. But this leads to what is a very emotional and poignant scene as Boimler leaves the party and finds Mariner at the bar and they really talk it out about their feelings.

It shows how much their relationship really matters to both and how they have grown to share those feelings honestly. Lower Decks has always been solid when it comes to keeping an eye on the ball for character development and they don’t lose that here. Mariner and Boimler find out about Kirk and Spock not being able to go to the party either and ending up at the bar where they carved their names on the counter, bringing us an emotional close when we see Mariner and Boimler ends up carving their names next to Kirk and Spock. Perhaps one day, these two will be Captain and First Officer and have even greater legends of their own. It’s an exciting prospect.

Back aboard the Cerritos though, Rutherford and Tendi are going through their own character development where Rutherford has to finally confront the effects of his memory loss. He and Tendi are fixing a model replica of the Cerritos but for some reason, it’s just not working and Rutherford can’t understand the instructions left by his old self. As the Doopler chaos chases them from one location to another, Rutherford’s frustrations boil over that he must be less than his old self because he can’t even figure out simple instructions and he’s just behind on everything from skills to the depth of his and Tendi’s friendship.

But Tendi reminds Rutherford that it was never about the completion, they purposefully never finished it to spend more time together without anyone bothering them. This leads Rutherford to realize that he’s not less than his old self and that he’s really been looking at this all wrong. I really loved to see Rutherford’s usually chipper self-being tested and having to work through his emotions just as much as I love the sequence of him and Tendi split-screen ejecting the warp core to escape from the Dooplers. When all the Cerritos crew ends up at the bar, Tendi brings up a Deep Space Nine model for them to build and it’s just really sweet to see everyone enjoying themselves, being comfortable with who they are, even if they don’t get invited into some big fancy party. Sometimes all you need are your friends by your side. 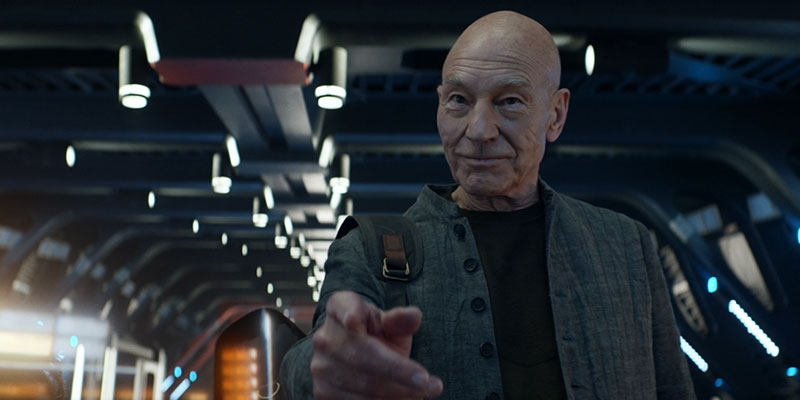 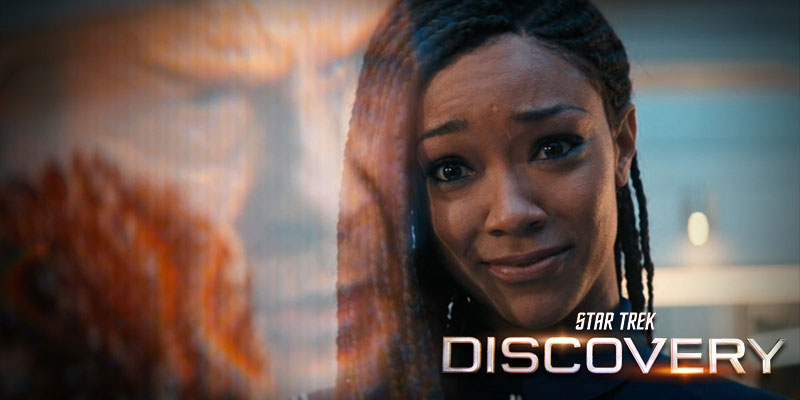 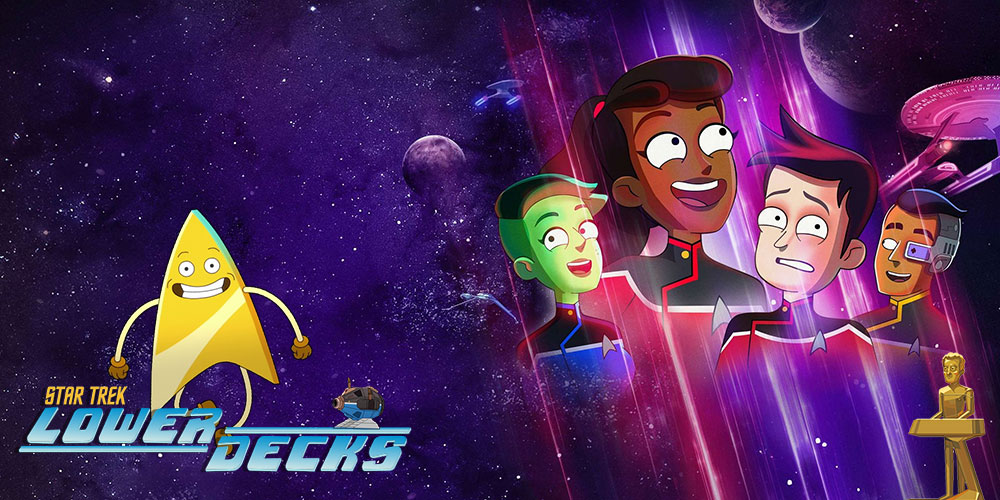