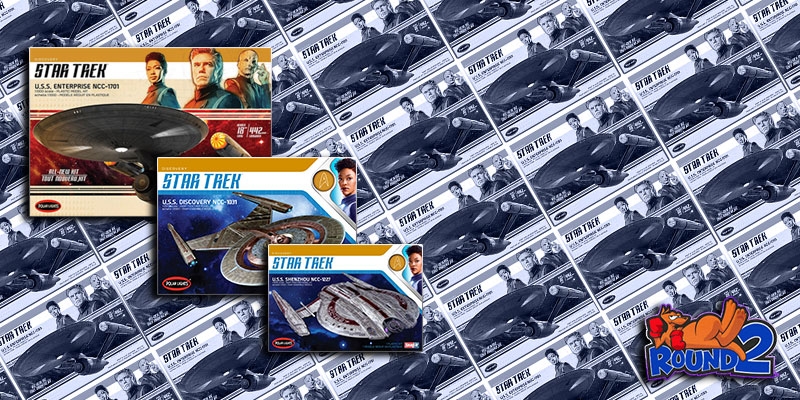 Star Trek is experiencing a contemporary renaissance. With a strong showing for Discovery and Picard through both CBS All Access and international distributors, and several new shows in development, the future is bringing for fans of the franchise. Each fan has their own way of expressing their fandom, and for many, a part of that expression is building scale models of their favorite ships from across the series and movies.

Jamie Hood may not be a household name, but if you have purchased a model kit under the Polar Lights or AMT trade dress in recent years, chances are he’s someone who has had an impact on your fandom. As Senior Designer for Round 2, he gets his eyeballs deep into details and considerations that might make our heads spin, but ultimately his work means more styrene Trek on the shelf. Hood graciously took time recently to talk with us about the state of Star Trek modelling in light of the current status of the franchise.

Star Trek: Discovery has been at the heart of the television revival of Trek, and has presented us with several major ships. Last year, kits of the U.S.S. Shenzhou, U.S.S. Discovery, and U.S.S. Enterprise were released in 1:2500 scale. These ships were highly detailed for the scale and included full-ship decals to replicate the complex hull plating patterns (called Aztecs by modellers) on the CGI filming assets. This attention to detail seems to have overcome the occasional resistance to the smaller scale kits. “I do see when we place reorders (new production runs of each kit)” says Hood, “and those (sales) seem to be healthy.”

Of course, for all the detail that was packed into the first three kits, there’s no getting around the fact that they were pretty small. “I think everyone would have preferred our initial three kits to be larger,” says Hood, “but the sizes spec’ed by the show’s production notes forced our hand to choose 1:2500 scale.” Internally, the design team would have preferred to ignore scale and just do 1-foot long models, “But,” Hood acknowledges, “we know our market is very conscious of the scale and we prefer to stick to 1:2500, 1:1000 and 1:350 whenever possible. The size of the ship made it impossible to consider 1:350 scale, and we generally hear that the majority of modellers really prefer medium-sized models that aren’t too small and still fit on a bookshelf. So landing around the 18” length is a real sweet spot.”

The healthy sales of the initial Discovery kits, combined with the ongoing strength of the show’s second season, sealed the deal for the larger 1:1000 scale kit of the redesigned Enterprise, first glimpsed at the end of the show’s first season. “When the Enterprise was revealed, I was pleasantly surprised by modeller/fan reaction,” says Hood. “Given that any version of the Enterprise they introduced had to be something new, the new design struck a chord by picking up on design cues from all of the previous versions of the Enterprise. And it seemed like the “love” part of the “love/hate” reaction seemed to be a respectably strong majority.”

Of course, the team at Round 2 had to consider a lot of factors in making their final selection. As Hood observes, “The U.S.S. Discovery was the namesake of the show, but opinions on its design were divided. The U.S.S. Shenzhou seemed to be a favorite design, but only appeared in a couple of episodes.” This leaves anyone making a decision with a challenge, but, as Hood continues, “The appearance of the new Enterprise really made the decision more difficult.” In the end, the name recognition and the overall positive reaction to the redesign of Trek’s Grand Lady brought the team land on the Enterprise.

The introduction of Captain Pike, Spock, and Number One, as well as the high profile for the Enterprise in season 2 only solidified the conviction that the team had made the right choice. “I think the producers of the show did a great job of offering old-school Trek fans something familiar to relate to in season 2. I can only imagine they realized how much that helped bolster fan interest and led to the recent announcement of the new show focusing on Pike and the Enterprise crew.”

An exciting opportunity with the new Enterprise kit is the availability of a comprehensive lighting package designed to interface with the kit. The scale of the kit presents some challenges, especially surrounding the incorporation of tiny lit features, like flashing beacons and navigation lights. As Hood observes, “The beacons got too tiny to inject clear parts. Those particular lights also happened to be flashing beacons in most cases. So we ignored those this time. There are also a few floodlights that allow the ship to shed light on itself in space similar to the refit that we omitted. We tried to find a way to include them, but fitting it all in a model this size and considering tool trapping, we had to abandon that idea.” Nevertheless, the light kit includes spinning fans in the bussard collectors with lights behind them and plenty of LEDs to properly light the ship. “Part of our consideration was to make the lighting more simple for beginners,” shares Hood.

With all the excitement about the Enterprise kit, however, the folks at Round 2 haven’t walked away from the idea of a 1:1000 scale Discovery. “I think we really just need to see if the ship has staying power in the minds of fans,” said Hood. “When Star Trek: The Next Generation came out, the Enterprise-D was quite a departure from what fans might have expected.” Of course, we know that the D has become a beloved fixture of Star Trek over the years. The team wants to see if the Discovery has a similar response. “We also want to see what the future holds for the show,” observes Hood, while sharing, “In my opinion, a fully lit Discovery at 1:1000 scale would be a beauty to see.”

While the Shenzhou, Discovery, and Enterprise have been the main featured players in Discovery, many fans have expressed hope for some of the other ships featured in the show – the Europa, Buran, and D7, among others. “I get the feeling fans really love the Shenzhou in a way that is similar to their fondness for the Reliant,” says Hood, “but we only see glimpses of the other Federation ships in the show. I really don’t know if the market would support the more obscure ships.”

As for the adversary ships, Hood notes “The Klingon ship designs are all nearly impossible to do properly in nicely sized model scales. The design elements they used just don’t lend themselves to injection molding.” Given these criteria, it is most likely that only the updated D7 Battlecruiser (seen in Season 2, not the ship associated with the D7 moniker in Season 1) would be suitable for injection molding; so while this isn’t a firm no, fans shouldn’t expect an announcement anytime soon.

Briefly touching on Star Trek: Picard, Hood noted that discussions were held early on with CBS Studios about potential projects based on the series. However, as the overall story developed and it emerged that there wouldn’t be a capital ship in the series, consideration for projects associated with it was put on the back burner.

Join us next week as Hood discusses upcoming projects from Round 2, including the long-awaited, all-new Galileo shuttlecraft, and some re-pops of classic kits.

In the meantime, while you wait for the second part of the interview with Jamie Hood, why not check out our video review of the U.S.S. Enterprise 18″ model kits.

You can order this kit at the following links… 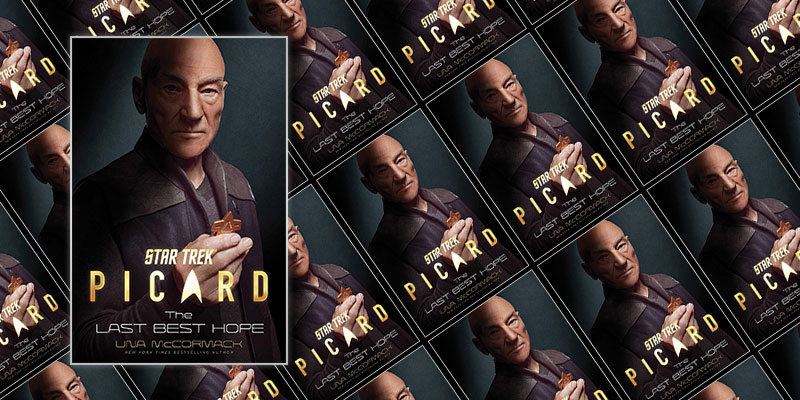 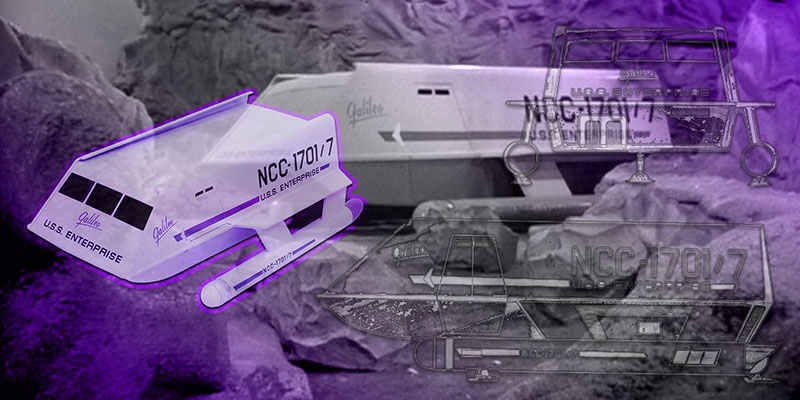 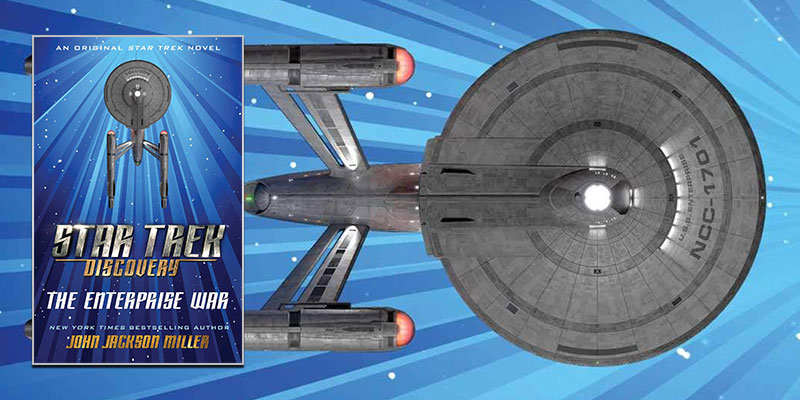 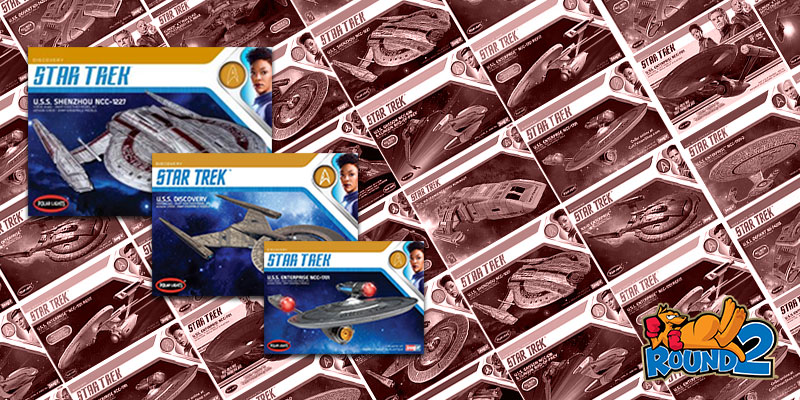