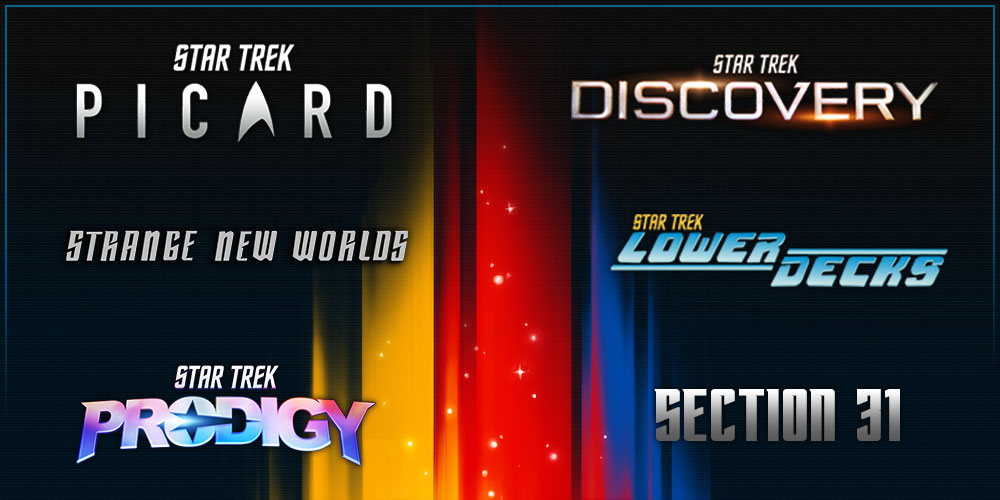 With all the news of shows starting production and characters returning we have decided to do a rundown of what we know, what the plots might be and any other bits of info we have managed to come across…

With a lot of delays due to COVID the second season of Star Trek: Picard is underway.

After what seems like forever! The second season of Picard began production this week, filming was due to start in June of last year but because the production is based at Santa Clarita Studios, in the immensely COVID impacted state of California filming had been halted due to restrictions placed upon the industry there. 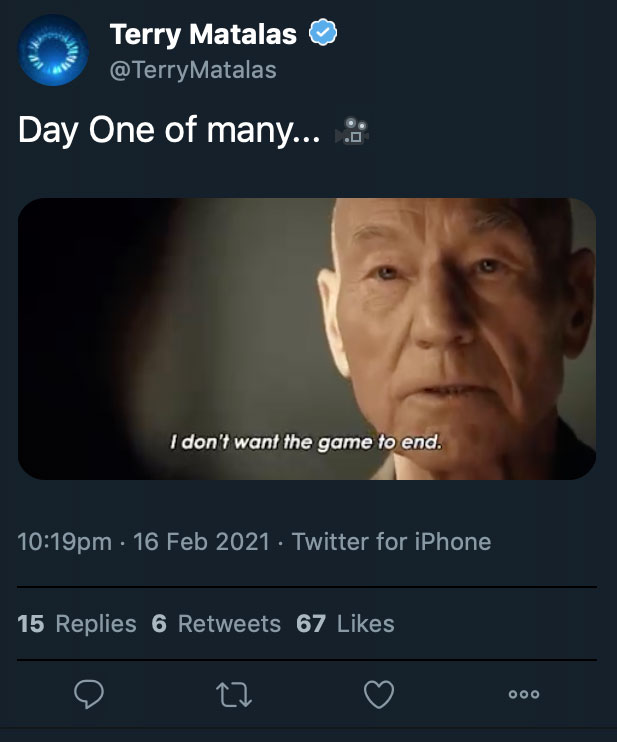 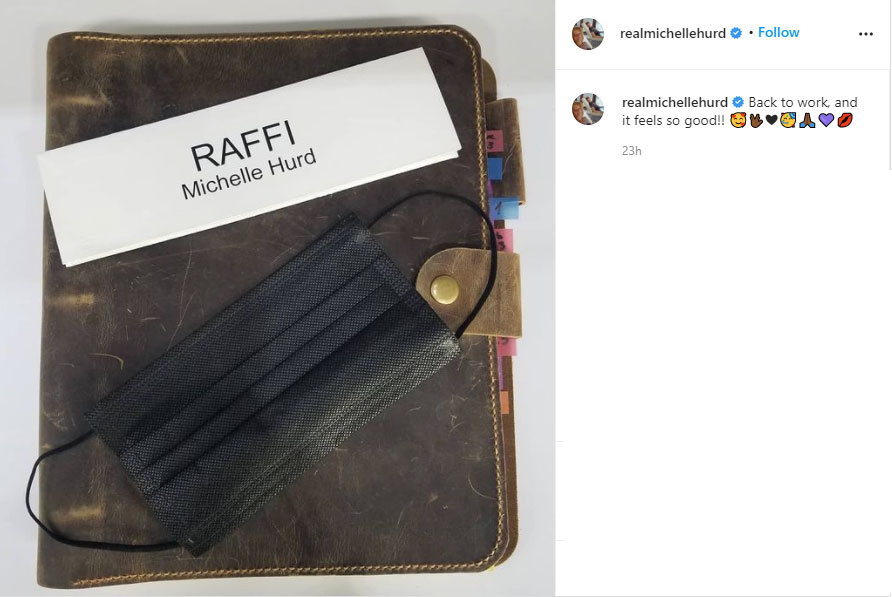 With production moved not once but twice firstly to Jan 2021 and again to Feb 1st it seemed that Picard’s second season might not resume filming for quite some time. It was not until Wednesday Picard actor Michelle Hurd (Raffi Musiker) shared a photo on Instagram of a table reading card, her notebook and facemask with the caption “Back to work and it feels so good!!”

Along with Hurd, the new show runner for Picard Terry Matalas tweeted “Day One of many…” which marked day one of the second season.

Although the tweet was quickly removed, the internet never forgets, and we managed to grab a image of the tweet while it was still up.

The hype for this show is real! So many fans old and new have been waiting for this day for almost two whole years.

Ever since Anson Mount and co appeared in the second season of Discovery, the fans have been chomping at the bit wanting to see more of Pike, Spock and No1.

Well, we will not have to wait much longer, the first season of Star Trek: Strange New Worlds, was green lit last year and production is due to start on the 22nd of Feb.

The show is set to be 10 episodes long and complete it’s filming in June this year. Although it will take some time for the postproduction work to be completed, we estimate that season one will drop on Paramount+ either late 2021 or Early 2022, perhaps even on 17/01/22 which of course is Enterprise day.

The new animated show that brings us the return of the iconic Admiral Janeway (Kate Mulgrew) has wrapped is first season and the second season is due to start production soon.

Not much is known about when the show will air or where, but we do have some news on one character set to return to the Trek family after 33 years away, Billy Campbell who played the loveable rogue Thadium Okona in “The Outrageous Okona.” Is set to return to the franchise in Star Trek: Prodigy.

Speaking to Comic Book Central, In a new extended podcast interview celebrating the 30th anniversary of The Rocketeer the subject turned to his stint in Trek way back in 1988.

“I loved Star Trek: The Original Series, Next Generation. I would not say that I was like, super, super Trekkie, but I definitely loved Star Trek. It did thrill me, and it thrills me still to be part of the Star Trek universe… And the sort of fun thing is that I recently just signed on – I think it is on Nickelodeon or somewhere – they are doing something called Star Trek: Prodigy. And it is animated. It is a comedy. It is an animated series. And they are bringing back some characters from the Star Trek universe that are… heritage characters. So, my guy is coming back and it’s hilarious.”

It is super funny. I come on basically to – and I am kind of schleppy and roguish, but just kind of disgusting in a way. And whoever the female character is just sort of goes over the moon for me. Much to the chagrin of the lead male character.

Not much is known about Discovery’s fourth outing, we know the production started in November last year and that the show is expected to take longer to shoot due to COVID restrictions, however, it has been hinted that the fourth season might be ready to release later this year.

Unlike previous seasons of Discovery, there appears to be little to no turnover within the creative team. As with Season 3, Michelle Paradise will be the showrunner for Season 4, with Alex Kurtzman serving as the executive producer.

We do know Doug Jones (Saru) is returning as is both, Ian Alexander, and Blu del Barrio for Discovery season 4.

In terms of plot and challenges season, 4 might bring, Discovery co-showrunners Alex Kurtzman and Michelle Paradise, along with star Sonequa Martin-Green, participated in an online panel with Deadline back in January with a few bits of information on what we can expect.

We are actually exploring – we are diving deep into science – in the fourth season, in a kind of new and interesting way.

He then made a cryptic comment about season four’s main adversary:

There have been many kinds of villains over the course of Star Trek. What happens when the villain is not actually any kind of living, breathing entity, but something else? How do you solve that problem?

So, what this means is anyone’s guess, could we be seeing a villain who is not flesh and blood or could it be another anomaly like the burn? What do you think??

The production on the second season of Lower Decks is underway and in an interview, Mike McMahan gave us an update of where things stand…

I can tell you right now we are so deep in production, not only is it all written, but I’ve got episode 209 to watch this week in animatic form. And we’ve already sent the first four episodes to color. So we are buzzing along. You guys will definitely get a new season next year, god willing… It’s a really great second season, I am really excited for you guys to see it. You don’t know what’s coming. It’s really fun.

There was was a distinct edict second season… I want to know more about Tendi and Rutherford by the end of second season than I did by the end of first… I don’t want them to be supporting Mariner and Boimler. I want it to feel like it’s almost four leads, as opposed to two leads and two sidekicks… Having now written all of second season, there’s a lot less ‘It’s Mariner and Boimler; It’s Tendi and Rutherford.’ More often it’s the four of them together or different mixes.

And after that shock death at the end of season one, get ready for some changes…

The new head of security… I’m really excited for you guys to see this. I’m really proud of what we decided to do there. And because we weren’t having to explain what the show was to ourselves or to an audience, you get some really fun Dr. T’Ana episodes… There’s a really funny Billups episode, where you learn more about his backstory. Billups is the secret sleeper favorite of the writers. We came up with such funny shit for him second season.

Second season is different. No longer is the secret between Mariner and her mom. What we do with that story and with Freeman I’m really excited for you guys to see it. First and second season feel different, in a good way.

With the departure of Michelle Yeoh in Discovery S3 the biggest question that people have been asking is will we see her again?

Well, we have known for some time that Yeoh is set to return and star in her own show but ever since its announcement things have seemed to cool off in terms of news and info.

A few things we do know is that the show is still a go and is currently being mapped out and written.

Back in August of last year During the Variety Streaming Room Q&A, Alex Kurtzman gave an update on where things stand.

The truth is that for Section 31 the idea of doing that show, it was Michelle Yeoh’s. She deserves all the credit for that. She actually came to me about it before we even aired the first season of Discovery. She loved playing the character [Captain Phillipa Georgiou] and she said, “I know that there are a lot of young women who grew up like I did and did not see somebody like me on screen and I want to be that person.” And I said, “That sounds amazing! Let’s do it.”

But we didn’t know if people were going to like Discovery. We didn’t know if Discovery was going to work, at the time. And so I said,” Let’s see how it works, and if we can get there let’s get there.” She killed it. She did amazing work on the show. And then in season two, we really started digging into the mythology of Section 31, which had been dealt with on other shows. And we started seeing a way to do it. And so we got there.

Be sure to keep checking back for more news on all these amazing shows… Also, do not forget to follow us on social media to keep upto date with news from around the Trek world… 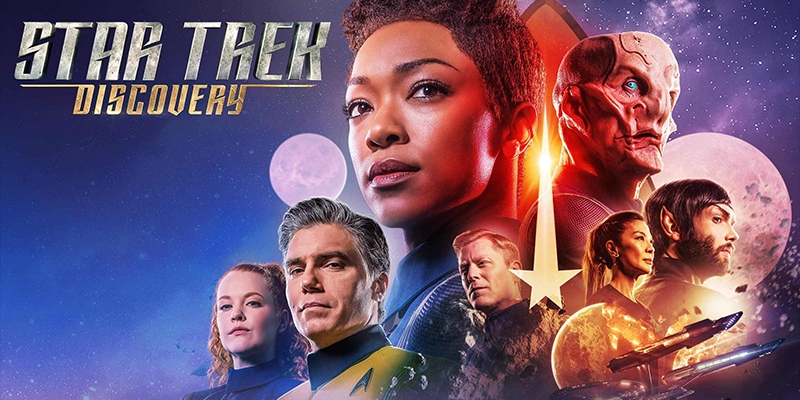 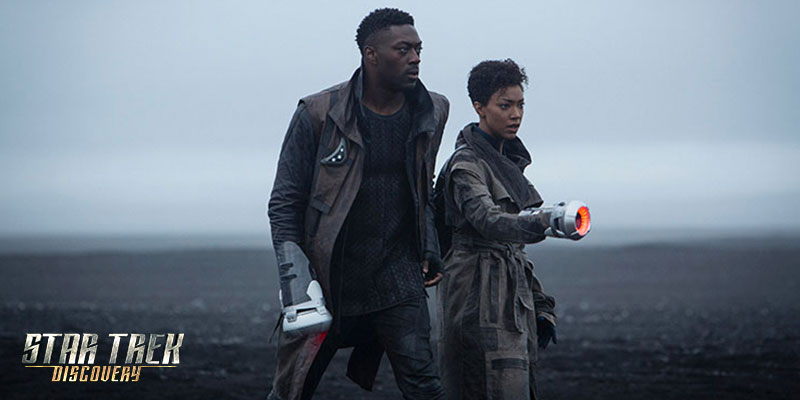 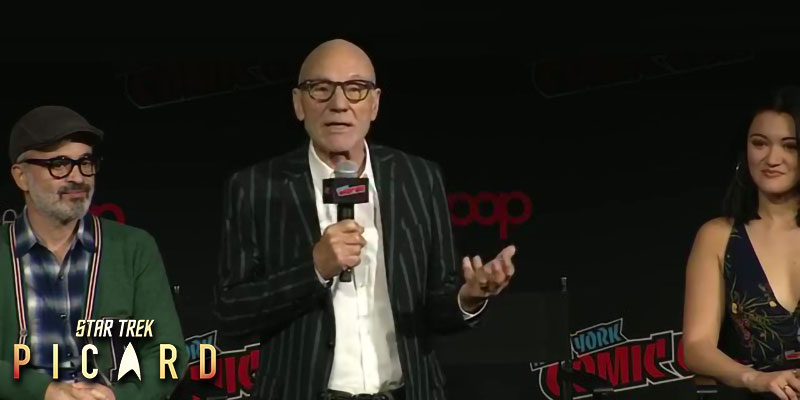