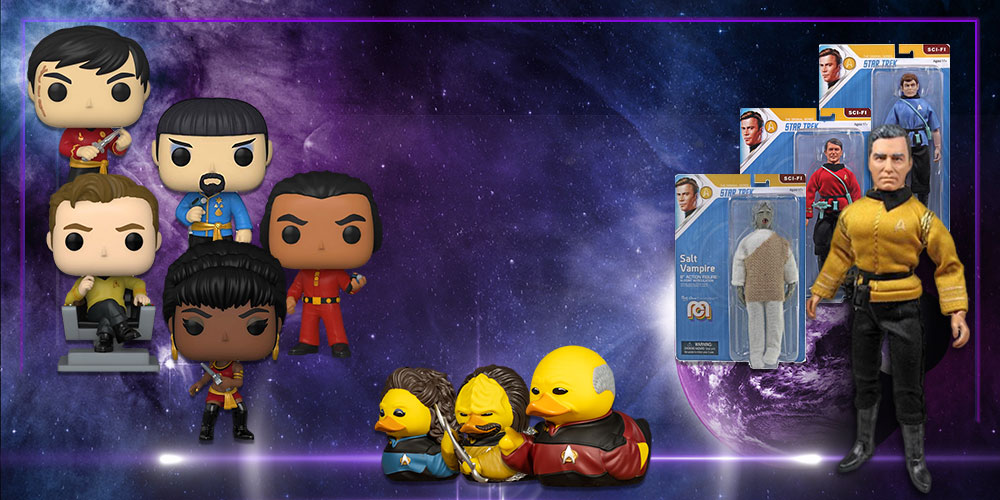 What a great time to be a Star Trek fan!  There are so many new tie-in products coming out lately that it might be a little hard keeping track, but luckily Treksphere is here to help!

Check out these new products releasing this summer!

Included are these new figures from The Original Series: Khan from “Space Seed,” Captain Kirk in the command chair, the Gorn from “Arena,” and Spock holding Isis from “Assignment: Earth.”  The Gorn figure will be sold as a Target exclusive, while Spock with Isis will be available directly from Funko.com; at press time, the Spock with Isis figure was not available for pre-order.

PREORDER – KHAN – KIRK – Spock with Cat and Gorn are currently not available for preorder.

There are also new figures coming from the famous episode “Mirror, Mirror” of Terran versions of Kirk, Spock, Uhura, and Sulu.  Collectors like me will know that Funko released a figure of Mirror-Spock back in 2014, but don’t worry! This one is a brand-new sculpt with increased detail in line with newer releases from the company.

Mego is another company with a long and storied history of making Star Trek collectables, and the reborn company is continuing that legacy with an expanded line of 8″ action figures!

First up is one I’m sure many fans have anticipated, Captain Christopher Pike as seen in Discovery season 2! The figure comes in a nice Disco-styled uniform accurate to Pike’s first appearance in “Brothers,” as well as Mego’s signature TOS-styled gear.  The boots even have Starfleet deltas printed on them!

We’ll also see three new characters from TOS, including the Salt Vampire from “The Man Trap” with its furry onesie!

In addition, rounding out the original crew of the Enterprise is this new figure of Doctor McCoy! In a departure from Mego’s original 1970s McCoy figure, this new one comes dressed in the short-sleeved scrub uniform the good doctor wore often on TOS, along with Mego’s signature TOS props.  The face sculpt on the figure accurately captures McCoy’s gruffness!

Lastly comes a new figure of Montgomery Scott with an updated head sculpt.  One can almost hear him complaining about the laws of physics!

Eaglemoss continues to impress with their ever-expanding line of informational books and beautifully detailed starship models, and they are not slowing down!  The Discovery starships collection was recently rebranded as the Star Trek Universe Official Starships Collection and will include ships from Picard, Discovery, and, eventually, Strange New Worlds. The initial releases in the new collection will centre on ships from Picard and models of La Sirena and the U.S.S. Zheng-He are already available for purchase, but later this year we’ll be able to get our hands on some of the amazing new ships of the 32nd century from Discovery season 3!

The company recently sent out a document to subscribers teasing some new entries in the collection, including Book’s ship, the seed ship U.S.S. Tikhov, the gorgeous U.S.S. Voyager-J, and the stunning U.S.S. Discovery-A!

Interestingly, the document identifies some of the more obscure ships of the 32nd century, which were seen but not explicitly identified on screen.  These include the vaguely C-shaped USS Dresselhaus (possibly named for nanotechnology pioneer Mildred Dresselhaus) and the four-nacelled scout(?) USS Currie, which if not for the spelling I’d assume was named for famed Trek artist and designer Dan Curry, though he’s already the namesake of a Starfleet ship from the 24th century.

The document also teases a U.S.S. Excalibur model.  Might this be one of Mackenzie Calhoun’s ships of that name from the New Frontier novels by Peter David?  Or possibly a briefly seen but an unidentified 32nd-century ship?  When Treksphere knows, you will too!

It seems the collection is not done with the first two seasons of Discovery yet, as the document teases the inclusion of a Deimos-class ship from the Section 31 fleet seen in “Such Sweet Sorrow.”  Those S31 ships are all really interestingly designed, with each sharing characteristics with others and forming a very nice design lineage.

I’ll note that this is only a preview of potential models.  In the past Eaglemoss has teased additions to their collection which didn’t pan out, notably a bunch of Klingon ships from Discovery season 1.  Keep this in mind as there is a possibility other ships from Picard and Discovery, and potentially Strange New Worlds, Lower Decks, and Prodigy may take precedence in the line.

Black Alert!  Making perfect use of the U.S.S. Discovery’s unique spinning saucer (or should we say ring?) section, Ukonic is adding to their line of Star Trek-themed pizza cutters with, you guessed it, Disco herself!

And be careful around mushrooms!

Black alert! This Star Trek Discovery Pizza Cutter is modelled after the Crossfield-class starship from the latest series Star Trek: Discovery. You hold Discovery by its long, tapered nacelles, and the segmented saucer section rotates to slice your pie. But with that experimental spore drive onboard, Disco fans know that if you order mushrooms, you do so at your own risk. If you accidentally tap into the mycelial network, we can’t be held responsible.

This cutter is styled similarly to Ukonic’s U.S.S. Enterprise tool and includes accurate registry detail on the spinning blade and follows on from the ThinkGeek-exclusive Enterprise-D cutter, which is sadly out of production.  I for one can’t wait to slice up a tasty pizza with this beauty! Order yours here!

Check out this cool video from Startrek.com!

Which one of these cool Trek items are you gonna grab? Let us know in the comments below… 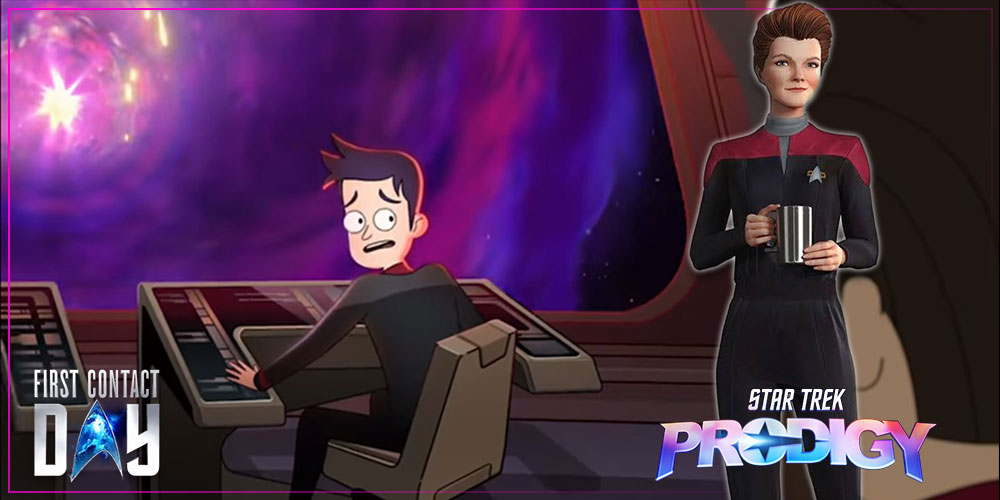 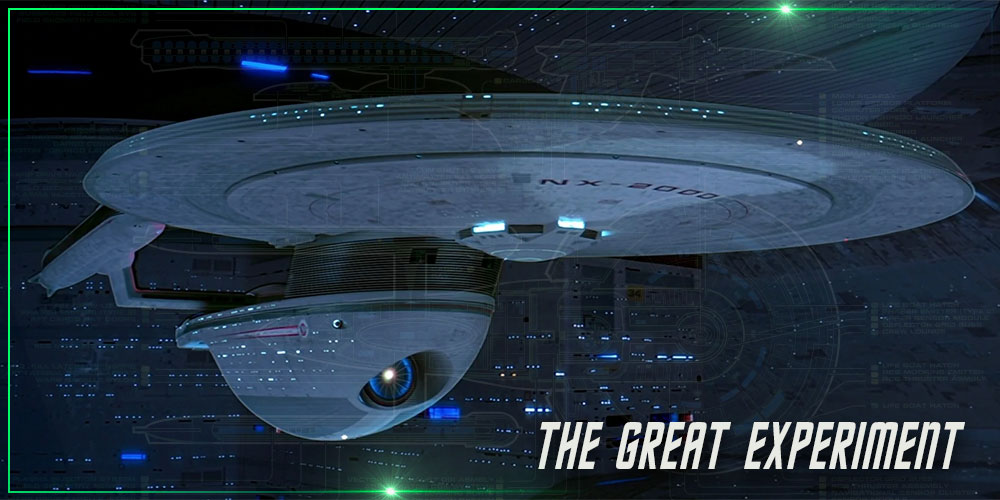 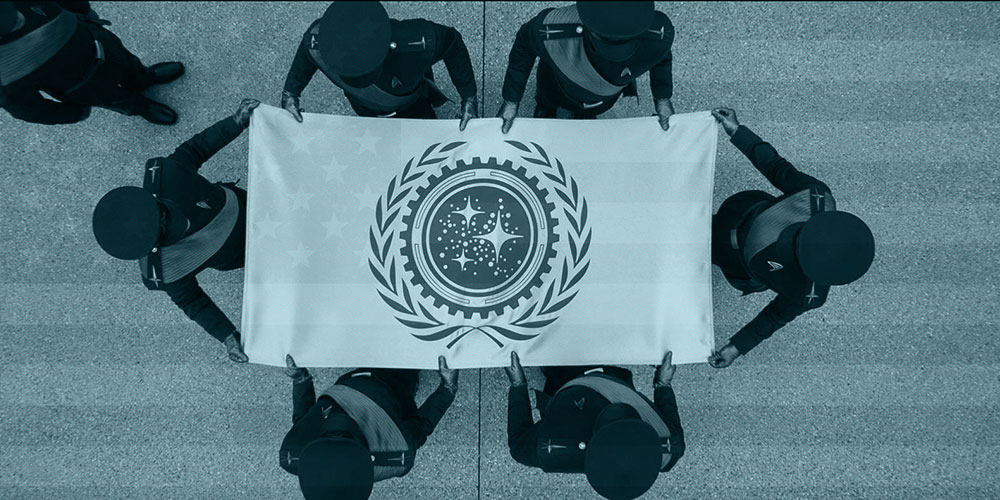 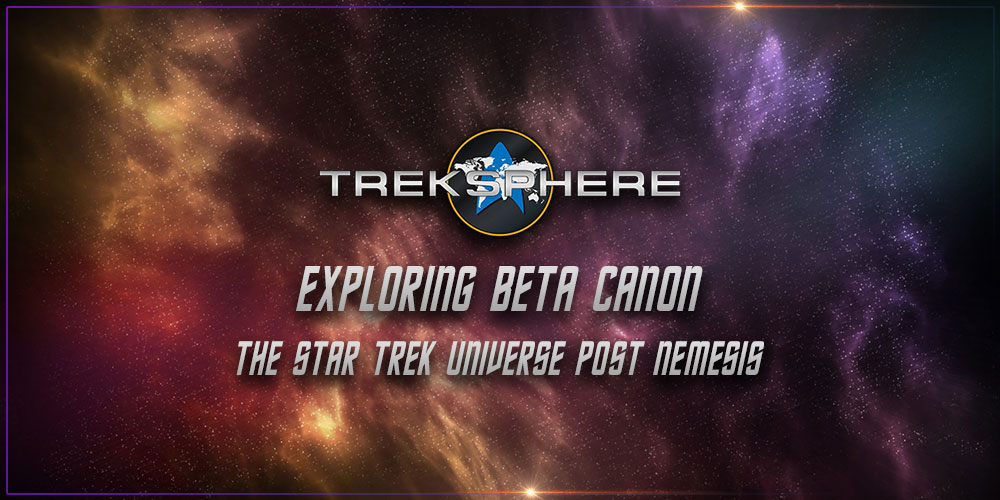