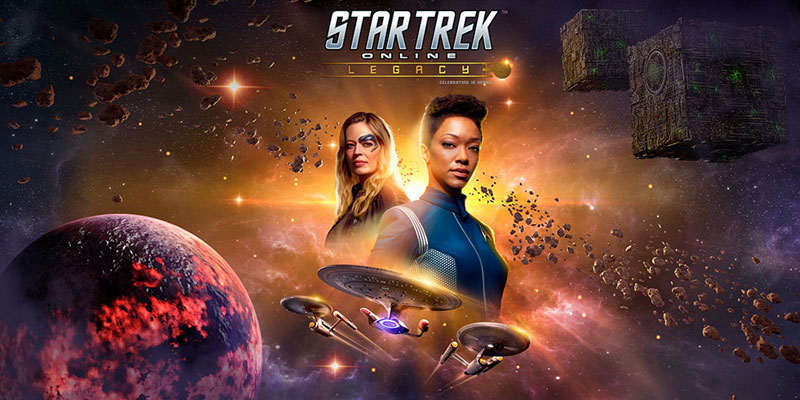 Spanning a whopping TEN years Star Trek: Online continues to go from strength to strength, along with its original in-game characters, STO has brought back a long list of fan favourites to reprise their tv/movie roles and it has even managed to add depth to a lot of stories that were left half answered within the TV shows.

This month STO celebrates its tenth-year anniversary and it will do so in style, joining the game is, Discovery lead actress Sonequa Martin-Green adds her name to the long list of Star Trek alumni and voice none other than Commander Burnham herself, along with the return of Jeri Ryan (Seven of Nine) “Legacy” will feature a NEW two-part story that will pit you against some of the games most feared enemies.

In “The Measure of Morality” you will be accompanied by both Seven (Ryan) and Burnham (Green) as you revisit the planet Excalbia, from The Original Series episode “The Savage Curtain.”

In this new two-part episode, ‘The Excalbians’ have decided to put on another test of Good and Evil, and your characters will play a major part in it, but like all best intentions, things do not always go as planned, expect twists and turns as you face off against foes past and present, revisit planets you have been to and there will be a few nods to all the TV shows packed in there too.

After playing the new episodes, we can tell you you will not be disappointed!! and expect to be amazed by both a compelling story, great dialogue and an ending that will WOW you!

The new “Legacy” update is described as a “love letter to the past and future of Star Trek Online, and we think you’ll love this jaunt down memory lane.” But it is much more than that, STO has become a major part of a lot of Trek fans lives, in the space between the end of Enterprise and the release of Discovery, STO was the only way to get your “fix” of Trek in what a lot of fans described as a dark period and the team behind this game has never failed to deliver giving the fans of this game what they so craved “Star Trek” in all its forms.

Along with the new episodes, the new update will feature a lot more, a new TFO, a chance to grab a new T6 ship and the return of the Omega Event.

The new TFO “To Hell With Honor” will continue the story of “J’Ula. This TFO takes place on the surface of a moon where there is a fleet of J’Ula’s Mo’Kai Klingons trying to bring a new fleet online, the goal of the new TFO is to stop them at all costs. this TFO will feature one of the largest enemies they’ve ever created in the game and is sure to thrill.

This year’s “Anniversary Event”, Players will gain credit each day over the course of 30 days by playing the new episodes, TFO, and the Omega Anniversary Event. They can then use that credit to claim an event exclusive T6 Starship, the cross-faction “Khitomer Battle Cruiser” this is the first time a ship in STO has been designed with all factions in mind.

You can read about the new ships stats HERE

Lastly, it would not be the yearly event without the “Omega Molecule Stabilization Event” the event returns with a new array of goodies for you to get your hands on along with the chance to craft “Omega Upgrades”.

Furthermore, two new crafting options will be available this year, in a change to the standard upgrade, now, Two Omega Fragments can be combined with varying amounts of Refined Dilithium to produce (Mark) and (Rarity) variations of the Omega Upgrade. These new variants focus entirely on improving item Mark or Rarity, respectively, making them ideal for players seeking specific avenues of upgrading their equipment.

Legacy is live NOW on PC and will drop on Xbox & PS4 March 3rd.

Did Lorca Always Have An Expiration Date?