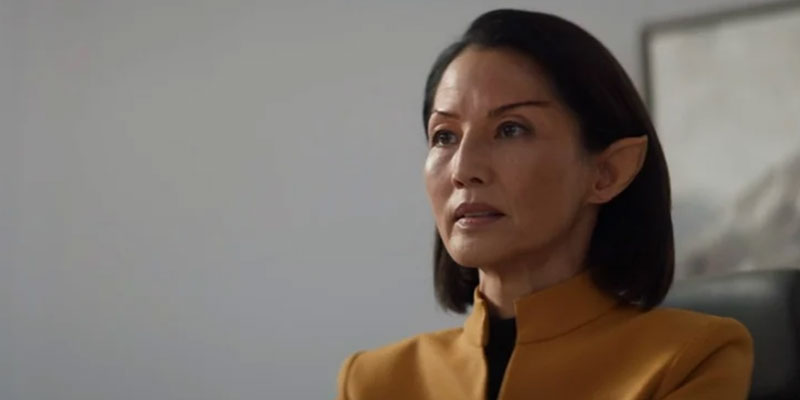 This week’s episode “Maps and Legends” we were introduced to Commodore Oh played by Tamlyn Tomita (Stargate Universe, Babylon 5). Oh is the head of Starfleet security and also happens to be a member of ‘Zhat Vash’, a secret Romulan group even worse than the Tal-Shiar – who appear to have moles at the highest levels of Starfleet.

One of the oldest enemies of the Federation and Starfleet, the Romulan Empire has always been known for their secrecy and fans have always considered that the Tal-Shiar are the Romulans secret intelligence agency, that was until this week.

In this week’s episode, while investigating the death of Daji, Picard and Laris find evidence that her death has been covered up by the Romulans, but when they investigate further they realise that only one organisation could be responsible, The “Zhat Vash”.

The “Zhat Vash” are so secret that even the Tal Shiar consider them to be a myth and the meaning of the name is a Romulan term referring to the dead, “the only reliable keepers of secrets,” but as we find out this week they are very real, and apparently driven by a fanatical hatred of all synthetic life forms and artificial intelligence, explaining why Romulan technological development is so inconsistent in terms of no AI’s or Androids.

But as the episode drew to a close we were introduced to Commodore Oh who from the outside appeared Vulcan, but is she?

In an interview with the Deadline Podcast Executive Producers, Alex Kurtzman and Kirsten Beyer, as well as Hanelle Culpepper, talked about all things Picard but when the subject of Oh came up Kurtzman drop a massive hint that she is not exactly who she appears to be and that she in fact a Romulan masquerading as a Vulcan in Starfleet.

When talking about the end of “Maps and Legends” the host referred to Oh as a Vulcan, Kurtzman was quick to correct that saying:

“The first thing I will do is correct something which is that is they are not actually Vulcan’s and Romulans, they’re ALL Romulans”

So now we know that Oh is actually Romulan, It’s tempting to conclude that the Federation is secretly working with the ‘Zhat Vash’ in Star Trek: Picard, which wouldn’t be a first as the Federation has a history of working with clandestine organisations (Section 31, Inter Arma Eine Silent Leges, DS9) and questionable races (Son’a, Insurrection) to suit their needs, and after all on April 5th, 2385 (First Contact Day) 92,473 people died during the attacks and 14 years later Mars is still burning.

However, even if this hypothesize is incorrect it opens the door to big questions like, what is she up to on Earth? Is she working with or against the Federation? and Will Starfleet stop her if they find out…

You can listen to the entire Deadline podcast HERE.

Star Trek: Picard airs Thursdays at 00:01 PST on CBS All Access in the USA, 21:00pm on CTV SCi-Fi/Crave TV in Canada and airs Fridays on Amazon Prime Video Internationally.

Patrick Stewart On Why He Returned, Will He Be In Uniform & Will He Do A Second Season?