With another Star Trek film getting ready to start shooting, and with many rumours pointing to a plot that may involve time travel, perhaps now would be a good time to review the Mechanics of Time Travel, as shown in Star Trek.

Time travel in star trek isn’t as simple as it is in other franchises; while many shows delve deeply into the complex mechanics of a particular time travel model, establishing a set of rules that drive that particular narrative, star trek tends to be a bit (pardon the plagiarism) wibbly wobbly about it all. Wormholes, spatial anomalies, advanced alien technology, fancy flying… with all the ways one can travel in time, and all the people doing it, sometimes, it seems rather miraculous that the entire universe hasn’t imploded in a paradox cascade.

So, let’s do this in a series of articles, breaking down the methods, and see if we can get a feel for what time is, according to star trek.

Any Explanation of time travel begins, relatively speaking, in the year 1915, with Albert Einstein’s Theory of General relativity. There are several aspects of Einstein’s work which cover a broad variety of fields relating to history, science, mathematics, and physics, but the notable aspect for this course would be the interrelationship between time, space, gravity, energy, and mass.

Whilst it could take an entire course to cover the entire theory, the critical information relates to the fact that gravity has an effect on time as well as space…theoretically, if one had a significant enough velocity with significant amounts of gravity, one could curve the space-time ‘world line’ of an object to such an extreme degree that it would loop back upon itself. 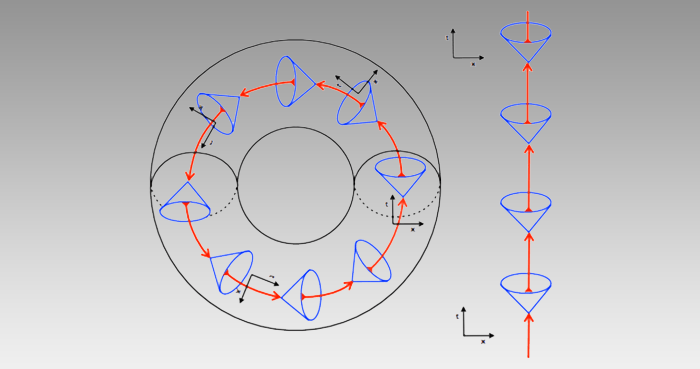 Of course, while the theory was mathematically sound, the drawback that prevented such ‘time loops’ was that one would need infinite gravity and infinite velocity, both of which were mathematically possible but physically impossible to achieve.

As of the 1970s through the beginnings of the 21st century, many other notables worked to refine and expand the early work of Einstein, Bohr and other notables of early 20th century theoretical physics, and various mathematical constructs were expanded to try and rectify Quantum Mechanics with Relativity, String theory, M-Theory, etc. all were developed with various aspects of these theories being applied to Bosons and the understanding of the subatomic structure of the universe. Of noteworthy mention among these theories is the proposed spacetime distortion theorized by Miguel Alcubierre, an early mathematical model that was the precursor for Warp Theory. In order to circumvent the barrier of the speed of light, to achieve faster than light travel, Alcubierre’s mathematics applied topological geometric distortion to spacetime. By changing the shape of ‘space’, making the space in front of the ship contract while expanding space behind the ship, a vessel could travel at extremely slow speeds while covering vast distances, travelling faster than light relative to an outside observer while never actually travelling faster than the speed of light. The problem was that once again, while mathematically sound and theoretically possible, the amount of energy and the size of the Alcubierre ring were impractical to the point making faster than light travel just as physically impossible as Einstein’s time loop. Researchers following Alcubierre’s path were looking into ‘dark matter’, ‘exotic matter’ and other such hypothetical breakthroughs to try and overcome the energy limitations of 21st-century technology.

By the mid-21st century, The Eugenics wars and World War III had caused a few setbacks for the technological and mathematical development of human civilization. At some point in the 2040s, a young mathematician named Zefram Cochrane revolutionized the old Superstring theory models, developing new mathematics that more accurately applied to the multiple spatial dimensions of string theory and quantum mechanics. He took the eleven-dimensional models of those older theories and developed what is now known as Subspace Theory. Applying elements of Alcubierre’s work, String theory, and quantum mechanics, Cochrane developed the first model for warp theory on earth: instead of focusing so much energy on creating a spatial distortion in three dimensions, Cochrane developed a method of distorting the single dimension of subspace. Due to its natural interactions with the four standard dimensions of spacetime, a subspace distortion was amplified exponentially as a distortion of spacetime. Utilizing post-WWIII hardware, including the matrix of a post-nuclear weapon prototype utilizing an antimatter warhead, Cochrane managed to successfully conduct a test flight of a warp-capable starship. His design, fueled by only a few micrograms of antimatter augmented by tritium fusion injectors, achieved the Human race’s first faster than light flight.

This, of course, ushered in a new era for humanity: First Contact with Vulcans, the founding of the Federation, and the exploration of the galaxy at large. As a byproduct of humanity having warp-capable starships, that old theory regarding Einstein’s ‘looped time’ was no longer impossible. Applied warp theory of subspace distortion allowed for velocities that exceeded the speed of light, and such velocities applied rather interesting mathematical modifiers to that ‘infinite gravity, infinite velocity’ model.

In the year 2266, the theory was put to the test, not as part of a controlled experiment, but in a moment of desperation. Federation Stardate 1704, aboard the USS Enterprise, NCC-1701: while investigating the collapsing planet Psi2000, the Crew of the enterprise suffered an operator-induced mechanical failure that left the main engines offline. In a rush to restore warp power before the gravity of the planet destroyed the ship, a forced matter/antimatter implosion was triggered to restart the engines. The surge in power coupled with the gravitational anomaly of such close proximity to the collapsing planet triggered a unique event: the conditions necessary for Einstein’s looped time were triggered. The ship was able to reverse away from the planet and found itself three days in its past. Science Officer Spock and Chief engineer Scott made notations, which would be used later for three other trips into the past: First, there was another near catastrophe: while travelling near a ‘Black Star’ (likely a star just on the cusp of collapsing into a black hole) the Enterprise had to break away, and once again accidentally slingshot itself into the past, where they nearly destroyed the Space Program by conducting an ‘alien abduction’ of an Air Force pilot.

During the following year, the enterprise once again used the slingshot manoeuvre to return to the 1960s, this time on an anthropological expedition to observe earth. They crossed paths with an operative of an extremely advanced alien race, who was tasked with safeguarding the earth from interference from extraterrestrials—or meddling time travelers—and the crew was ever so subtly encouraged not to go mucking about in the past anymore. (Considering a few other instances of time travel they had already by this time, the Federation wisely decided to shelve the time travel experiments.)

A few decades later, following a series of felonies by Admiral Kirk in an attempt to bring Spock back from the dead, the crew of the enterprise found themselves in an old Klingon Bird-of-Prey, rechristened the “H.M.S. Bounty” in acknowledgement of crimes tantamount to mutiny. The Earth was besieged by a bizarre Alien Probe, which was apparently trying to make contact with whales…a species extinct by the 22nd century. Given the severity of the situation, the crew of the Bounty made use of the slingshot manoeuvre to travel back to Earth in the mid-1980s and recover a pair of whales to answer the probe and repopulate the oceans.

This was the beginning of time travel for the Federation, and the first examples of humans intentionally jumping through time by their own devices, but it was not the only experiences the Crew of the enterprise would have with time travel….

Space: Above and Beyond

The Science Of Star Trek – First Star to the Right