What is Destination Star Trek (DST)?

Destination Star Trek is Europe’s Official Star Trek convention. In short, it is a celebration of all things Star Trek! At DST you have the opportunity to meet the actors who appeared in the various iterations of Star Trek, from TOS to Discovery. You are able to attend free and paid talks by the cast, crew and fellow fans and get up close and personal with your favourite Star Trek actor by either getting a photo shoot with them or an autograph. There are various exhibitions with props and costumes and also various Star Trek sets that you can have photos on (e.g. the TNG bridge). There are a host of other activities, such as episode screenings, fan zones, game zones, party nights and vendors where you can buy Star Trek merchandise. If you’re a Star Trek fan – this is the place to be! More than all of these things, it is a place to meet fellow fans, make new friends, meet people you’ve interacted with on social media and just have an epic time with others who share your love of Star Trek.

Where and when was DST?

This DST was held in Birmingham in the UK. The venue was the National Exhibition Centre (NEC). DST took place over three days, Friday 19 October to Sunday 21 October 2018. 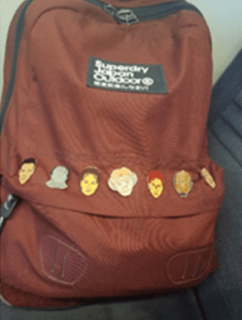 I travelled up to Birmingham International train station from Kent on Friday 19 October, leaving home at around 9 am in order to get there in time for the opening of DST at 2 pm. I put my ‘What We Left Behind’ DS9 documentary Indiegogo backers pins on my rucksack and set on my way! The journey there was incredibly exciting – my first Star Trek convention in over 15 years! It was great to see on twitter all the Trekkies I interact with making their way to Birmingham and by following the hashtag #DST I could see how excited everyone else was making their journey to Birmingham too!

I arrived at the NEC and made my way tentatively to the hall to collect my tickets, after stopping for a quick caffeine hit! I was a bit nervous, to begin with, as I was on my own and didn’t know anyone, so I looked around to see where I was meant to collect my pass (I got a Lieutenant package – a 3 day pass with entry to a few paid talks, a bridge photo shoot and a green screen photo shoot). Once I figured out where to go, I queued up to get my pass and within 5 minutes of being at DST, I saw Marina Sirtis, Michael Dorn and Gates McFadden passing on their way to the green room, which was awesome! 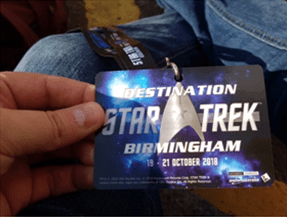 Having got my pass, I was feeling a bit at a loose end and my friends (the @10Backward crew), who I was sharing a house with for the weekend, hadn’t arrived yet so I took to Twitter to see if any of the Trekkies I interact with online had arrived to see if I could hang out with them. The lovely @annaonthemoon came to my rescue and came and found me which was really kind of her. We chatted for a while, talked about how excited we were and made plans to meet up later over the weekend. My soon to be housemates then arrived and while we hadn’t met in person before we bonded immediately over our love of trek and our excitement for the coming weekend’s shenanigans! We queued to enter the hall and at just after 2 pm we were in! It was everything I’d hoped it would be – giant banners of the cast, huge stages, vendor stands, bridge sets, autograph tables and much more! I literally didn’t know what to do first!

I headed for the Voyager Stage (one of the two stages for free talks) to go to the first talk of the convention with the @TrekkieGirls interviewing Jonathan Del Arco, who played the Borg, Hugh, in The Next Generation. Was a great first talk to start the convention off.

After wandering around the convention hall for a bit and taking in all the awesomeness I went to get two photo shoots I had paid for. The first was with Martha Hackett, who played Seska on Voyager (among others). Seska is one of my favourite Star Trek villains and I loved Martha Hackett’s portrayal of her so I just had to get a photoshoot with her. I was, like many I imagine, a bit tentative about the photoshoots as they can seem impersonal because you literally only get 5-10 seconds with the person who you are having your photo taken with which is perfectly understandable as there are hundreds if not thousands of people that want to have their photo taken. Also, it can be a bit daunting meeting someone you’ve watched on tv for years and if like me, you end up thinking ‘what do I say’? I took the plunge and went for it though. Martha was really friendly and immediately put me at ease. She asked me my name and how I was, which was really nice as I can imagine it can get very tiring for the actors doing these photoshoots.

Luckily for convention goers, there are a few places to eat and drink within a 5-minute walk of the NEC, with a Starbucks right outside the convention hall, a newsagent, a Subway and a Wetherspoons (UK pub serving food) around the corner. Throughout the weekend myself and other Trekkies I spent time with made regular pit stops at Wetherspoons where we had a chance to have a drink, catch up, talk about the days events and talk Star Trek.

After a drink with the 10 Backward crew and my good friend, @TehBorg, who I got to meet for the first time in person, I proceeded to my next photo shoot with Jeffrey Combs, who played so many characters in Star Trek it would be easier to list those he didn’t play! I’m a huge Weyoun and Shran fan so it was a pleasure to meet Jeffrey Combs and he seemed like a thoroughly nice guy. 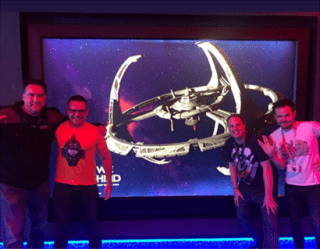 I was lucky enough to be invited along to the private screening of the DS9 documentary ‘What We Left Behind’ for Indiegogo backers by the incomparable Jim Moorhouse, host of @TrekRanks. It was held at a nearby cinema with around 50-100 people and Ira Steven-Behr was in attendance to introduce the documentary. I got to meet a few other brilliant Trekkies – @doublemac and @leenostromo which was really cool. Without giving too much away – the documentary was absolutely brilliant and was a perfect mix of interviews, backstage stories, insights, humour and emotion. Definitely, see it if you can!

After the DS9 documentary screening, we headed to a nearby restaurant and hooked up with some of my favourite podcasters, Duncan Barrett (@BarrettsBooks) and Clara-Jean Cook (@ClarajeanMC) to draw day one of the convention to a close. I returned back to the house I booked with the 10 Backward crew (a good option if you are going with friends or happy to stay with people you know) and after watching the Search for Spock we settled in for the night and recounted how awesome day one was!

Make sure you come back to check out Part 2 next week,

A Look Back At Destination Star Trek, Birmingham 2018 – Pt 3

The long-awaited Section 31 show starring Michelle Yeoh (Philippa Georgiou) has finally moved into Pre Production, with her set to