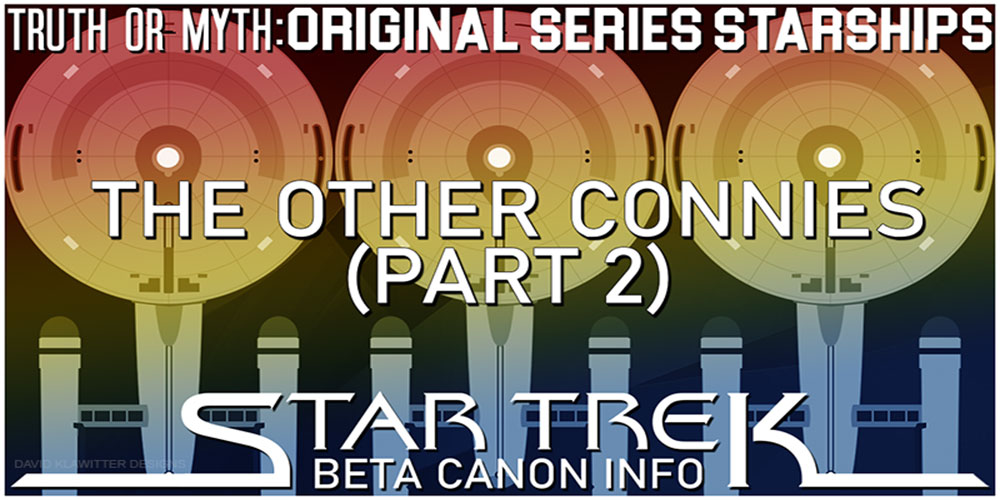 Truth OR Myth? Beta Canon Starships – The Other Connies Pt 2

Hello and welcome to another episode of Truth OR Myth Beta Canon,  a Star Trek web series that dives into a the history of any given topic using Beta Canon sources using my own imagination to fill in the gaps, and create a cogent narrative.  In today’s episode, part 2, (Read part 1 HERE) we’re continuing our look at some of the other Constitution Class Starships and their histories.

One of the most famous starships in Starfleet History, the adventures of the U.S.S. Enterprise NCC-1701 and its crew are well known to all.  But what about the other Constitution Class Starships?  What are their stories?  Well today, we find out…

Because this IS a Beta Canon video, all information relaid should pretty much be taken with a grain of stardust, and only considered a little bit of Star Trek Fun!  And so, with all that out of the way, let us begin.

Unlike most of the Constitution class Starships, the U.S.S. Excalibur NCC – 1664 was constructed and commissioned at Tranquility Base, Luna.

In the early 2250s, the Excalibur was part of a task force that along with the U.S.S. Enterprise and U.S.S. Hood travelled to an area of space known as the Borderlands to investigate the destruction of Starbase 18, which was believed to have been attacked by the Klingon Empire.

In 2266, the Excalibur was assigned to a seven-month patrol mission of the Romulan Neutral Zone. Strangely, however, the Excalibur would not encounter a single Romulan Vessel during this mission and after its completion, the Excalibur’s crew was granted two-week shore leave on Argelius.

In 2267, the Excalibur was sent to Altair VI to Rendez-Vous with the U.S.S. Enterprise and show the Federation Flag at the inauguration ceremonies taking place there. A few months later, the Excalibur, under the command of Captain Anton Harris, along with the U.S.S. Lexington, responded to a distress call from the Enterprise after it became trapped in a black hole. The Excalibur and the Lexington were able to rescue the Enterprise and towed the powerless starship to the nearest Federation Starbase for repairs.

Late in 2267, the Excalibur was assigned to Sector 221-G and surveyed the planet Priatia.

In early 2268, Excalibur relieved the U.S.S Enterprise at the Beta Cabrini mining colony. The U.S.S Excalibur brought a security contingent for the colony and equipment to construct a planetary defence grid. Later in 2268, the U.S.S. Excalibur took part in the disastrous M-5 Multitronic Computer tests. The Excalibur, along with the Lexington, Hood, and Potemkin, participated in war games to test the computer’s reflexes while it was installed aboard the Enterprise.

However, the M5 computer system malfunctioned and fired full weapons on the Excalibur, reducing the ship to a powerless hulk and killing her entire crew. A well known tragedy still felt by Starfleet to this day.

In the early 2250s, the Hood was part of a task force responding to a distress call from Starbase 18 in the area known as the Borderlands. They were under attack by the Klingon starships.  Upon arrival, however, there were no signs of any Klingons but Starbase 18 had in fact been destroyed.

In 2256, the Hood, under the command of Captain Kenneth Dodge was the first starship to make contact with the Rey on the planet Gullrey. The arrival of the U.S.S. Hood brought great joy to the Rey, as due to their star system being relatively isolated, they believed they were the only sentient life in the universe. Also in 2256, the command of the Hood was transferred from Captain Dodge to Captain Mark Rousseau.

By 2266 however, Rousseau had transferred to the U.S.S. Lexington as that starships Captain, and Captain Oxley was given command of the Hood. Shortly after assuming command, the Hood was attacked by the Kzinti, as a result, the bridge was destroyed and the command staff, including Captain Oxley, were killed. However thanks to the actions of Ensign M’Ress the U.S.S. Hood was saved , when she snuck aboard the Kzinti ship and managed to send out a distress call, bringing Federation Starships to her rescue.

The U.S.S. Hood, after being repaired, would be assigned patrol duties along the Kzinti border and would be instrumental in preventing a war with this long time foe.

In 2268, the Hood participated in war games against the U.S.S. Enterprise and the M5 Multitronic Unit, and although damaged, the Hood survived this encounter.

In early 2269, with the U.S.S. Hood now under the command of Captain Joaquin Martinez, the starship answered a distress call from Dr. Aaron Brown on planet Exo III. When the Hood arrived at Exo III they eventually discovered that Brown was an android duplicate, and the entire starships command staff is killed and replaced by duplicates.

Eventually the U.S.S. Enterprise, Captain James T Kirk and his crew, are able to uncover the plot and stop the duplicates. In mid-2269, the U.S.S. Hood was assigned to relieve the U.S.S. Enterprise who had been conducting patrol missions along the Romulan Neutral Zone, so that Enterprise could render aid to Centaurus following the accidental detonation of an antimatter bomb.

With Captain Kenneth Dodge temporarily placed in command of the ship, the U.S.S. Hood participated in The Great Starship Race, a special event taking place in the hopes of fostering peace between different species of the galaxy.

The Hood was recorded as being destroyed in 2270 while battling the Tomariians. The incident nearly caused a state of war between the Romulan Star Empire and the United Federation of Planets.  And although the war was averted, unfortunately, the U.S.S. Hood was lost with all hands.

The U.S.S. Lexington NCC-1709 completed two five-year missions before Captain Mark Rousseau assumed command in late 2258. Rousseau commanded the Lexington until 2264 when he retired from Starfleet, and Commodore Robert Wesley was given command of the starship.

In 2267, the U.S.S. Lexington rendezvoused with the U.S.S. Enterprise, to transfer Ambassador Robert Fox to that starship and gave Captain James T Kirk a new classified order to transport the Ambassador to Eminiar VII in the hopes of opening a dialogue with its people.

In mid-2267, the U.S.S. Lexington led a Federation Fleet to the planet Organia to confront a Klingon fleet after the Empire had declared war on the Federation.  This war was short-lived, however, when the Organians themselves were revealed to be omnipotent beings, and stopped the war, simultaneously forcing both sides to sign the Organian Peace Treaty.

In late 2267, the U.S.S. Lexington and the U.S.S. Excalibur responded to a distress call from the U.S.S. Enterprise, when the starship was left powerless after sling-shooting through a star while attempting to escape Adrik Thorsen and his allies.

In 2268, the U.S.S. Lexington led war games against the U.S.S. Enterprise to assess the capabilities of the M-5 Multitronic Computer.  However, following the M5’s malfunction the U.S.S. Lexington was severely damaged, with 53 members of her crew dying in the attack.  Commodore Wesley then requested and was granted permission to attack, disable or destroy the Enterprise. Fortunately, Captain Kirk and his crew were able to stop the M5 unit and the Enterprise would be spared destruction as a result. After the M5 incident, Commodore Wesley took an extended leave of absence from Starfleet and accepted the governorship of the Mantilles colony, but he would return to Starfleet and the Lexington by late 2269.

In 2270, the Lexington was assigned to defend the planet Gateway and the Guardian of Forever from a Romulan attack.  with the assistance of Captain Kirk and the Enterprise, they valiant fought off the Romulan aggressors, and the Enterprise returned to Earth having completed her 5-year mission.

After the successful refit of the U.S.S. Enterprise, the U.S.S. Lexington was also slated to receive the same upgrades and refit.  however, after analyzing the feasibility of refitting the older starships, Starfleet decided to merely build new refit style Constitution Class starships as the refit program proved far too costly and time-consuming. As a result, the U.S.S. Lexington would be decommissioned in 2273, and replaced by the U.S.S. Lexington-A late in that year, though Commodore Robert Wesley, who had been promoted to the rank of Admiral, would no longer command the starship.

Though many of the Constitution Class Starships would meet an untimely or disastrous end, no one can deny the impact this class had on both Starfleet and the United Federation of Planets.

And ingenious evolution in both design and technology, the Constitution Class would be viewed as a jewel in Starfleets Crown, eventually receiving a refit and upgrade that would see this class continue well into the next century, and because of starships, such as the U.S.S. Excalibur, U.S.S. Hood and the U.S.S. Lexington, their commanders and crews the Constitution Class would become one of the most famous classes in the federations, earning these starships their place, in Starfleet History…

Thank you for watching today’s episode of Truth or Myth, what do you think of the Beta Canon history for these Constitution Class Starships? Do you think more information on these starships should be included in the Strange New Worlds Series?  Well leave your comments in the section below and don’t forget to like the video and subscribe to the channel.

What to help the channel in it’s battle against the M5 Unit? Then just click HERE to become a channel Patron… 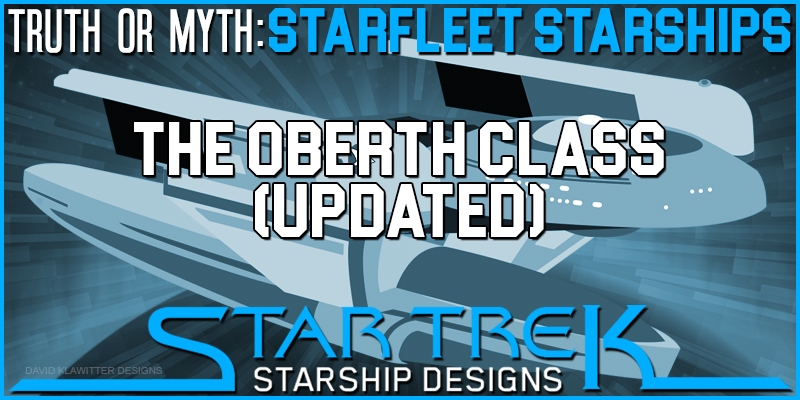 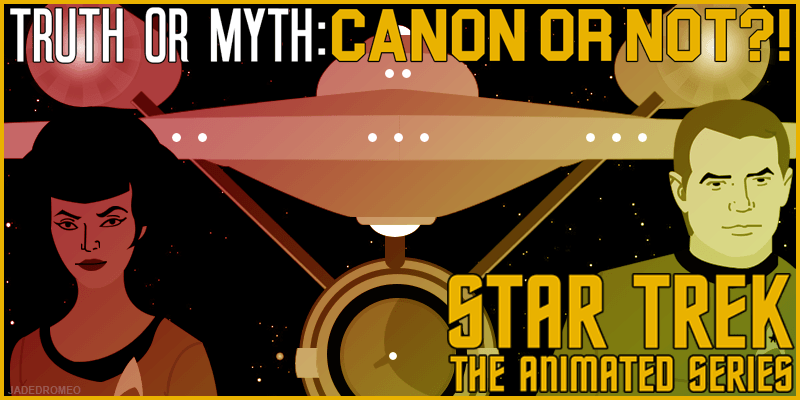 Truth OR Myth? The Animated Trek, Canon Or Not? 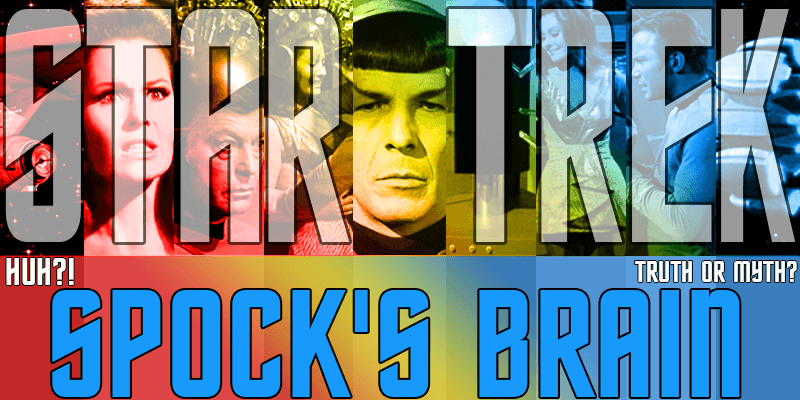 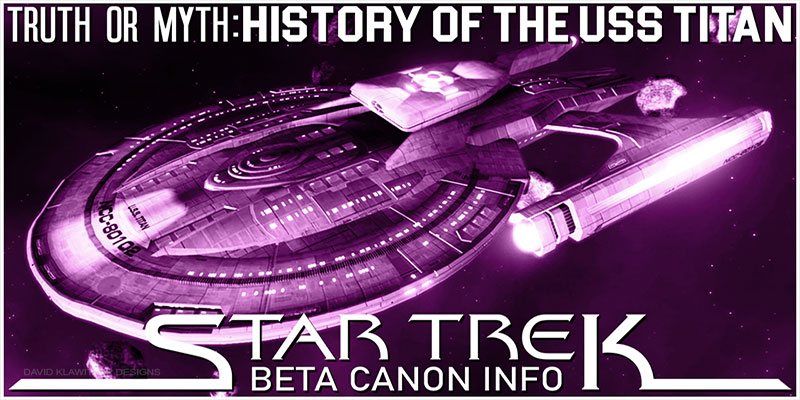