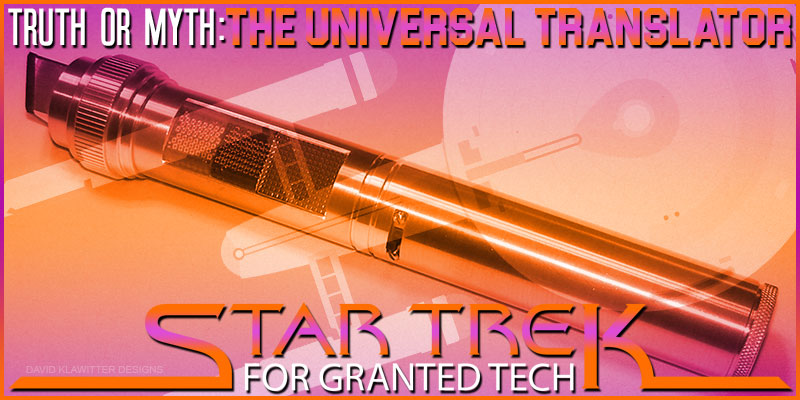 Hello and welcome to Truth OR Myth, a Star Trek web series that takes a look at the truth or canon to dispel myths that have propped up over the years on any given topic.  In today’s episode we’re going to take at the Universal translator a piece of Star Trek Technology we the audience take for granted in Star Trek, and how most of that tech just couldn’t exist, at least not as is, here in our real world.  So sit back, relax, grab a Racktigino or a Romulan Ale, and stand by to have your mind blown, Engage!

One the biggest, and probably the FIRST big piece of Starfleet Tech that we the audience take for granted is probably the Warp Drive in the Star Trek Universe.  This convenient plot device allows our heroes to travel from planet to planet with just the word engage.  But warp drive isn’t the only piece of Star Trek Tech that we take granted, and in today’s episode of Truth OR Myth, we’ll take a look at another one…

The Universal Translator or the UT is probably the MOST taken for granted piece of technology within the Star Trek Universe.  This little gadget or set of algorithms or miracle allow our heroes to talk with every species of the week in proper English.  It is TRULY an amazing piece of tech, but if you stop for a minute to think about it, it will drive you mad with all the circular arguments it will have your brain pondering.

So this Universal translator is able to listen to a few sentences of pretty much ANY language and deduce the entire language of that species and then instantaneously transmits the translated dialogue to our heroes to debate and consider. But how exactly is this possible?  First, we as humans have the ability to learn multiple languages here on Earth, and granted, some languages have a common origin that you can see patterns.  Take Portuguese and Spanish, in a lot of ways they are very to each other, and so if I learn Portuguese I may be able to understand most of Spanish, it’s just simple logic.

However, If I learn English, French, Spanish and Portuguese, and I run into an Only German Speaking Star Trek fans, chances are I’m not about to know or pick up ANY of the language except by coincidence. Now I’m no Super Computer with advanced heuristics, however, the idea THAT a computer with a translation matrix can listen to a few sentences and decipher in perfect English the exact language of an entirely different species seems unbelievable at best.

Take Google Translate, for example, you put in your sentence and BAM you’re able to talk to another human being in their language, or at least partially.  See there are always gaps in that translation.  In the sense that Google Translate is only as good as the information, it has.  So although you might have a grammatically correct sentence, the nuance and flair we as humans naturally add to a sentence seem to be gone. Slang that we use here in Canada, may NOT exactly translate to German, and so you end up being laughed at a little for being so wrong.

So how exactly does the Universal Translator account for slang in other languages?  The answer?  The plot of course.

The U-T is even more fantastic then simply a verbal language translator.  In fact, it can detect and translate light patterns.  Remember the Companion in TOS’s “Metamorphosis“?  There the translator not only translated blinking patterns of light but even assigned a female voice to those patterns and it spoke again in perfect English.

What’s also so very interesting about this tech, is its the ability to not translate in cases of dramatic potential.  The Klingons for example, instead of saying Success, the Universal Translator will automatically leave that word Success in it’s original Klingon exclaiming Qu’Pla!  Why?

Why does the Universal Translator almost always translate everyone’s languages except for a few key phrases here and there seemingly without any sense?

Now I suppose someone at Starfleet could go through and say ok, lets put an exception into this program for when the Klingons yell Qu’Pla to keep it in their native tongue…  But that seems highly unnecessary, unusual AND a waste of time. Of course, the biggest problem with the Universal Translator is its ability to instantly translate anything.  I mean before an alien has opened its mouth, the translator knows exactly what they are going to say, slang and all, and broadcasts that to us the audience.  Not only that but as an added bonus, it even makes these aliens mouths move in perfect English.  Again a truly amazing device.

The idea that a Universal Translator that can do all this is of course absurd.  Again look at our own languages here on Earth.  If I say, “Je Suis un fan de Star Trek,”  That translates to I am a Star Trek fan in English.  But it’s not a direct translation, it’s actually saying I am a fan of Star Trek, as English reverses some of the phrasings when compared to French.  See the problem with UT now? It automatically will take reversed phrasing, place it in the right order before the person has even spoken the word that the UT needs to place in a different part of the sentence.

Now I’ve often heard people try to explain away all the Universal Translators impossibilities by saying how it can do all this, is by scanning brain patterns and deciphering them.  Well, that’s a great explanation, but hardly viable. You see, if Starfleet had that kind of technology, that could scan and decipher again into English ever brain ever in existence in the Trek Universe, then why isn’t this technology used in other circumstance.

Take Riva from TNG’s episode “Loud As A Whisper“.  He’s that amazing mediator who uses a chorus to speak, as he himself was born deaf.  So if the ut truly had the ability to scan peoples brains and report back, the deafness would simply not exist as it would have the ability to scan Riva, know exactly what he intended to say and report it back approximating his voice. In fact, I’m not sure why the Universal Translator doesn’t simply translate his sign language.  If it can translate flashes of lights SURELY it could translate sign languages that are ALREADY in its database.  And yet, for seem reason, that’s simply beyond its capability.

Of course with the Universal Translator, we really couldn’t have episodes.  And most fans of Star Trek simply ignore the, “how could it work,” in favour of the great stories and it’s premise alone, Star Trek: Beyond actually tackled this problem in a more believable way.  At one point Starbase Yorktown picks up a stray from a vessel in distress, and the computer dutifully translates her language.  However, this time, it’s in a computerized voice where you can hear her speaking her original language under the translation.  And of course, her lips are moving to HER original language.

Unfortunately, though a valiant effort, it simply adds a much larger problem to the Star Trek Universe this way, as now that means that when we hear English spoken, that means that the people speaking it are actually speaking English.  So that means if you want to join Starfleet, you have to learn English, this seems rather unbelievable in itself as to why would an organization made up of hundreds or even thousands of species pick English as being it’s one and only language?  What would make our one little species so important that every Alien Species encountered would agree to that?

The truth is we’re better off with it just working as is and not giving it much thought at all.  And of course this way, the Star Trek Universe keeps on turning and we the audience prevent our heads from exploding from paradox after paradox about this amazing piece of technology…

Thank you for watching today’s episode of Truth OR Myth.  What do you think about these 2 specific taken for granted pieces of Star Trek technology? Do you have others that you’d like me to cover in the future?

Well leave a comment in the section below and don’t forget to like the video and subscribe to the channel hitting that little bell icon so you won’t miss a single video we release.

What to help the channel out translating these videos to Federation Standard? Then just click HERE to become a channel Patron…