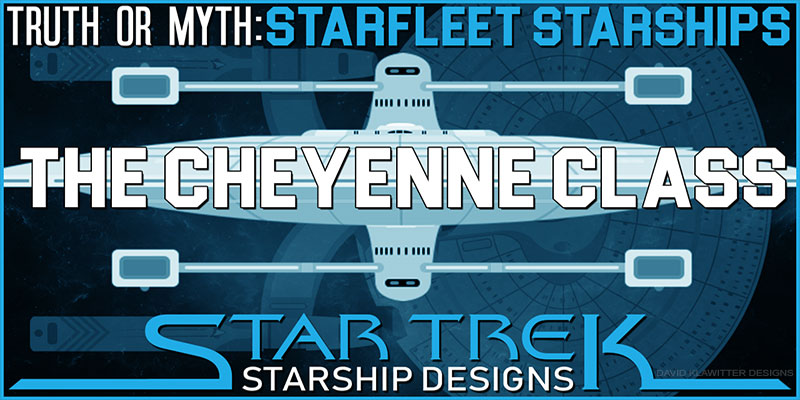 Hello and welcome to another episode of Truth OR Myth,  a Star Trek web series that normally looks at the Truth, or canon, information to dispel the myths that have surfaced on a given topic.  Today’s episode though is a bit different as we’re taking a look at the Cheyenne Class of Starfleet Starships.

With brand new innovations and technological breakthroughs, Starfleet Command finally decided to update their image in the Milky Way Galaxy and design brand new classes of starships that would lead Starfleet through to the 25th Century, at least that was the plan.  And one of those starship classes was the Cheyenne Class…

There isn’t a lot of information available of this class, so what I’ve done is thoroughly researched the Class through Beta Canon and filled in some of the gaps with my imagination, all to give you good Tri-naries a little bit to chew on about this fantastic class.

As a result, though, most information in the video should pretty much be taken with a grain of stardust, and only considered a little bit of Star Trek Fun!  And so, with all that out of the way, let’s begin.

Starfleet was looking old.  After peace relations and ongoing treaty negotiations had been established with the Klingon Empire, and the Romulan Star Empire pretty much closing its own borders off, having virtually no contact with the Federation, Starfleet began to take a long hard look at itself to see what it’s next steps would be.

The 23rd Century had been filled with innovation, and Starfleet adapting to the new technological breakthroughs with brand new classes and ships of the line that amazed the Alpha and Beta Quadrants.  The 24th century, however, had seen a decline in innovation and an even steeper decline in new starship designs, Starfleet opting to simply upgrade and refit it’s current classes while exploring the unknown.

The Excelsior Class had proven herself a valued addition to the Star fleet, while the Ambassador Class had more of a mixed bag in terms of resources and performance, put simply, she just didn’t wow Starfleet Command as much as had been hoped.

This, of course, was due to the breakthrough in Isolinear technology.  The Ambassador class had been designed right before the breakthrough and had been subsequently adapted for this new technology.  However with isolinear technology in its infancy, and other ship components still of older Excelsior Style Duotronic designs, the Ambassador class, which was supposed to outdo the Excelsior Class in terms of performance, simply didn’t.  And this caused Starfleet some concern when discussing new starship design possibilities with it’s Core of Engineers.

After the loss of the Enterprise-C at Narendra 3, and with more and more skirmishes happening with various hostile governments such as the Cardassian Union and the Breen Confederacy, Starfleet stepped up its plans and decided to commission many new starship designs, all with the same basic aesthetics, to show Starfleet was still a force to be reconned with, and the jewel of these new designs would be a massive exploration powerhouse which would become known as the Galaxy Class. Starfleet Command did put some stipulations on its designers for all these new classes they were to develop.

First, there was to be a clear connection between all these new designs, and this connection had to be a complete departure from any 23rd-century designs.

Second, the classes all had to be engineered with all the new available Starfleet technological breakthroughs and innovation in mind, including the new Warp Cores and Warp Coil assemblies Starfleet had recently developed.

Taking these stipulations into consideration, Starfleet’s Core of Engineers decided on a redeveloped saucer section to be the tying component between all these new classes.  Gone would be the UFO style saucer of the 23rd Century, replaced by a much more imposing and football-shaped saucer design then had ever been seen before. And so with the basics of this new saucer section planned out, Starfleet’s Core of Engineers got to work on designing and developing all the new classes for Starfleet, including the Cheyenne Class.

The Cheyenne Class stood at approximately 394 meters in length, with a width of approximately 250 meters.  It had 20 decks and a crew of approximately 245-320 crew members depending on its mission specifications. With the new style warp core having just been developed, Starfleet’s core of engineers had many theories as to how to better utilize it’s massive power increase to benefit both the Starship itself and Starfleet Command, and so it was decided that the Cheyenne Class would be of a 4 nacelle design.

Federation space had been growing since it’s initial conception and as a result, Starfleet’s Engineers had to continually update and refine warp travel in order to allow for the vast distances that now needed to be covered by any starship serving in the fleet. As a result, the Cheyenne Class would have a standard cruising speed of warp factor 9 and an emergency maximum speed of warp factor 9.6.  This would allow her to be an excellent vessel class for deep space exploration along with defending the Federations outermost borders.

Tactically, she would be equipped with Starfleet’s News Phaser Array emitter system, a larger covering arc based on the smaller prototype phaser array emitter system used on the Ambassador Class.  And she would also have both forward and aft torpedo launchers utilizing the newly designed photon torpedoes.

Shield emitter systems were also upgraded and redefined for these new classes of starships, and by utilizing the larger amount of power available from the new warp cores greatly improved shield strength. The U.S.S. Cheyenne was launched in the latter part of the 2340s and performed quite well during her shakedown cruise, though not as much as had been expected by its design engineers. Tactical systems worked as expected and after a few settling adjustments in fact performed much better than had been expected.

The only real problem with the design had been with its warp-speed tests.  Again the Engineers had designed this class with a warp factor of 9 being its standard cruising speed, this however was not meant to be. During trial runs, the Cheyenne Class performed well up to a warp factor 8, but once passing 8 the starship began to shake, and by the time she reached warp factor 9, the ship was violently shaking and the Structural Integrity Field System, along with the Inertial Dampeners were having real problems trying to keep up.

Put back into dry dock to attempt to solve the problem, Starfleet’s engineers were at a loss.  On paper everything looked good, with computer simulations backing up what warp field theorists had been hypothesizing since the class had begun its design phase, there was no reason why the ship class shouldn’t have worked out as planned, yet it simply didn’t.

Redeveloping and re-engineering the Structural Integrity field and the Inertial Dampeners for the class did end up solving the problem to Starfleet liking, allowing the ship to have a warp factor of 9 as it’s emergency speed, albeit still rather shaky when hitting it.  And the Class when into full production in 2350.

By 2356 the Cheyenne Class was settling into its deep space exploration role when a young recent graduate of the University of Tomobiki joined the Daystrom Institute of Technology and would finally solve the problem that had plagued the Cheyenne Class during its initial launch. Dr Leah Brahams realized that the problem with the new warp core systems on all these new starship classes and the ones being developed had to do mostly with the Subspace Field Generators,  Dilithium Crystal Servo Subsystems and a Plasma Resonance.

And so she set herself the task of fixing these problems and did so in relatively short order. Calling the U.S.S. Cheyenne back to Utopia Planitia, the Cheyenne was equipped with the newly designed Brahmas devices and when testing began, the Cheyenne Class was finally able to reach warp 9 with no problem and could hold warp 9.6 with far less shaking then had been previously experienced.

As a result of her ingenuity, Leah Brahams would be promoted on to the team developing and constructing the Galaxy Class, where she herself would be hailed as one of the leaders in warp field theory and its applications within the Federation. The Cheyenne Class would go on to prove herself time and time again, though mostly in combat, as most of the Cheyenne Classes constructed by Starfleet were assigned to patrol duties along the Cardassian, Breen and Xenkethi Borders.

It was believed that these new designs of Starfleet’s would lead the Federation through to the 25th century, however, this would not come to be.

With the Borg attack at Wolf 359, Starfleet would re-double its efforts in designing new starship classes and technologies to defeat this seemingly unstoppable foe.  And with the breakthrough in bio-neural circuitry, which overnight made isolinear technology obsolete, Starfleet’s Core of Engineers would redesign Starfleet’s aesthetics to a sleeker, more arrowhead design, rendering these older bulkier designs rather unpopular.

Starfleet could have simply upgraded the technology in these classes, but chose not to as times in the United Federation of Planets was changing and the newer classes seemed to revitalize Starfleets image within the Galaxy.

And by 2380 most of the Cheyenne Class had been decommissioned with a few being left around for transport duty.

Then when The Romulan Star Empire requested aid from the United Federation of Planets to assist in a mass evacuation of Romulus and it’s surrounding systems, Admiral Jean-Luc Picard convinced Starfleet to mobilize a massive rescue armada of ten thousand warp-capable ferries which were assembled over Mars.

Starfleet Command began to pull all starships out of mothballs it could to make this fleet a reality, this included all the decommissioned Cheyenne Class starships.  However, when Synths attacked Utopia Planitia in 2385, all of these Cheyenne classes would be destroyed, and Mars itself would be set ablaze.

It is truly sad this class met it ends in that way, as it was class that represented a short but defining era in Starfleet history.  And although only a hand full now remain, the Cheyenne Class performed so well during its short lifetime,  that it certainly earned its place in Starfleet history…

Thank you for watching today’s episode of Truth or Myth, what do you think of the Cheyenne Class?  Did you like my non-canon interpretation of it?  Do you want to see more episodes like this one?  Well leave your comments in the section below and don’t forget to like the video and subscribe to the channel, hitting that little bell icon so you won’t miss a single video we release.

What to help the channel design it’s own new classes of starships?  Then just click HERE to become a channel Patron…