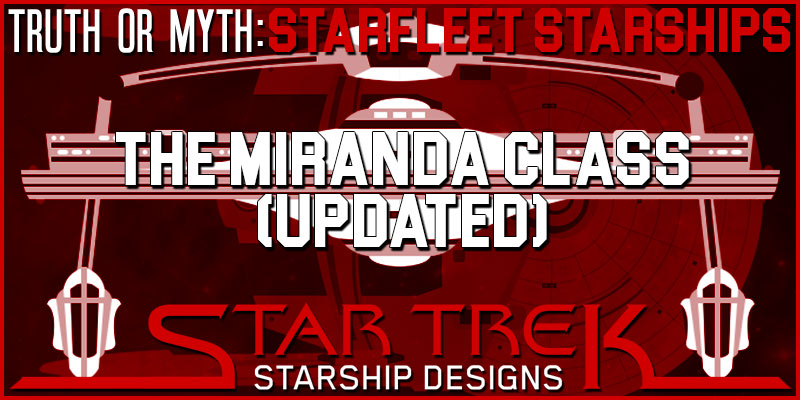 Hello and welcome to Truth OR Myth,  a Star Trek web series that looks at the Truth, or canon information, to dispel any of the myths that have surfaced on a given topic.  In today’s episode, we’re taking another look at the Miranda Class one of the first starships I covered in a Truth or Myth episode and the last of my original Starship videos that needed to be updated.  So I hope you enjoy…

One of the longest-running classes in Starfleet History, the Miranda Classes simple but effective design would see it serve Starfleet with distinction for over a century…

The Miranda class was approximately 277 meters length and 127 meters wide with a crew of approximately 220 officers and men.  But by the 24th Century, this classes crew compliment had been drastically reduced to only 35 officers and men.  This, of course, can be explained by major advances in shipboard systems automation which then required less crew aboard to operate a vessel of this size.

This vessel design is believed to have been commissioned in the late 2260s or early 2270s and may have been a testbed for the new technology, such as the vertical warp core being considered for the Constitution Class Refit program.  Before this program, all Starfleet starship had a horizontal warp core system, which although powerful, would be swept aside for this radically new design.

Tactically this class had 6 standard phaser emitters and 2 photon torpedo launchers.  But due to the adaptability of this class, Starfleet would introduce several variants on the design.  Certain variants, such as the roll bar variant would also include pulse phaser cannons and additional torpedo launchers including an aft launcher.

Shield systems were standard for the time and era that any vessel was operating in.

There are five known variants of the Miranda-class during its time in service.  Some of these variants included two large sensor pods attached to both sides of the primary hull. These variants allowed the Miranda Class to easily be adapted to mission-specific functions.  For example, the Miranda Class could have the roll bar installed and become a patrol vessel, or later the roll bar could be swapped out for the sensor pods and become a science vessel ready to conduct planetary surveys at a moments notice.  A class variant even existed with no additional pods added.  This variant was usually assigned to cargo or medical duties.

The Soyuz class starship which was in service until the latter part of the 23rd century lends credence to the theory about how Starfleet was most likely using the Miranda Class as a testbed for new technologies.  Being an obvious variant on the Miranda class, this ship design would be given its own name but would be retired from service very early in the ship’s lifespan having lasted only 10-20 years.  SO most likely it was testing some type of new and improved technology but ultimately must have failed or else its construction would have continued like the Miranda class.

This easy reconfiguration of the class most likely lead to its longevity. The aft section of this ship included 2 large shuttlebays.  This allowed the class to be used at times to deploy fighter craft or scientific missions where the transporter was no available. Though appearing smaller visually than the Constitution Class, the Miranda Class actually had more internal volume then that famous starship line.  This also meant that more areas, whether being scientific laboratories, guest quarters or cargo bays, could be fitted within her hull.

Like in most Starfleet designs, the main bridge was located on deck 1.  At this classes launch, the standard configuration for the bridge saw similarities between it and the Constitution Class Bridge.

Access to this bridge, however, was limited to 1 turbolift behind the captain chair. The Captain’s chair was located in the centre pit of the bridge on a raised platform, with the helm and navigational console in front of it.  Other consoles, such as the Science station and Tactical Station, among others, were located on the perimeter wall.  This allowed the captain an unobstructed view of any station he or she desired.

By the 24th century, however, the standard bridge configuration had been dropped in favour of variant and function-specific bridge designs. Engineering was, and remained, a multi-level design while transporter rooms would be adapted to standard configurations of any given era. Corridors in this class generally remained the same over its century of use.  Having panels and light status bars in an angular configuration.

Crew quarters were also standard for the time, but officers generally received quarters with large picture windows that afforded an unobstructed view of space surrounding the starship. Many ships in this class participated in major Federation Events during this classes service history. In 2285, Khan Noonian Singh, who had been exiled to the planet Ceti Alpha 5 for attempting a take over of the U.S.S. Enterprise under the command of Captain James T Kirk, would be successful in capturing a vessel of this class the USS Reliant.

And using the Reliant would launch a sneak attack against the refit Enterprise virtually crippling the starship, in a bid to gain his revenge against the now Admiral James T Kirk. The Enterprise would prevail in this initial encounter, however, using Reliant’s own prefix codes to lower its shields which in turn allowed the Enterprise to damage Reliant enough to force its withdrawal.

Unable to get main power back online for some time, the Enterprise proceeded on its an original mission to investigate the situation on Spacelab Regula One.  Spacelab Regula One and it’s a scientific team headed up by Doctors Carol and David Marcus were developing a device known as the Genesis Torpedo.

This torpedo when launched at a planet could re-organize subatomic particle with life-generating results.  Which meant that suddenly, Starfleet could have the ability to create a new fruitful planet where a dead one had once existed.  This was a technology that Khan himself desired, though to be used more like a doomsday device, rather then a device to help the Federation terraform worlds easily as using the Genesis Torpedo on a planet where life already existed would destroy that life in favour of the Genesis Matrix.

Forcing the Reliant into a cat and mouse game in the nearby Mutara nebula, Kirk and crew would be successful in stopping Khan and his crew aboard the Reliant.  However, in a last-ditch revenge effort, Khan would trigger the Genesis Device aboard the Reliant believing the Enterprise to be too damaged to escape its effect.

Captain Spock then sacrificed himself in an effort to bring main power systems back online and saved the Enterprise as the Genesis Device reorganize the atoms of the Reliant and the Mutara Nebula into a new planet that would be named the Genesis Planet.

In 2286, while patrolling the Neutral Zone, The U.S.S. Saratoga detected a huge cylindrical vessel heading through space on course for Earth.  Sensor analysis reveals it to be some kind of probe and after a short time begins draining all the power from the Saratoga leaving it virtually lifeless in Space.

Thanks to the Saratogas efforts, however, Starfleet Command was aware of the probe and began preparations for its arrival, although those preparations would be to little avail.

Eventually Admiral Kirk and his crew, aboard a captured Klingon Bird of Prey would decipher the probes signal realizing it was that of whale song and head back to the year 1986, picking up 2 Humpback Whales, heading back to the 23rd Century, where these whales then communicated with the probe and the probes attack on Earth ceased and the probe withdrew from the Terran star system.

In 2367, another U.S.S. Saratoga, again belonging to the Miranda Class, participated in the battle of wolf 359. Captain Jean-Luc Picard of the U.S.S. Enterprise D was forced to use his vast Starfleet knowledge to destroy the fleet of Starfleet Vessel sent to stop the Borg Cubes advance on Earth after he himself was captured and assimilated by the Borg.

Now known as Locutus, Picard would attack and eventually destroy the U.S.S. Saratoga, an event that would have a lasting impression on its first officer Lieutenant Commander Benjamin Sisko.

This event would lead Commander Sisko to head up Starfleet’s Starship Design program created to devise starship designs to fight the Borg, and the Defiant Class itself would be designed and constructed by this program.

Years later, Commander Sisko, would be given command of Space Station Deep Space Nine, an abandoned Cardassian station after the Cardassians withdrew from the occupation of Bajor.  And after the discovery of the Bajoran Wormhole and the Dominion forces of the Gamma Quadrant, Benjamin Sisko would head up several battles that the Miranda Class starship participated in.

Though sadly by this time, the Miranda Class had begun to show it’s age as many of these ships were destroyed during the Dominion war.

With breakthroughs in Starship Technologies and designs, it is believed that the Miranda Class would finally see itself becoming decommissioned in favour of the equally as easily built and much more powerful starships designs such as the Defiant, Nova, Sabre and Steamrunner classes among others.

Whatever the reason for it’s eventual decommission however it’s clear that the Miranda class served with honour and distinction for at least a century in Starfleet’s forces.  And allowed the United Federation of Planets to continue to explore strange new world and seek out new civilizations as well as to protect itself from the evils that awaited them during those exploratory missions.  Making the Miranda Class one of the most important and well-used starship classes in Starfleet history…

Thank you for watching today’s episode of Truth or Myth, what do you think of the Miranda Class?  Would you like to serve aboard one?

Well leave your comments in the section below and don’t forget to like the video and subscribe to the channel, hitting that little bell icon so you won’t miss a single video we release.

What to help the channel out getting its revenge on James T Kirk? Then click HERE to become a channel Patron…

In today’s video, we breakdown the plot threads revealed in the “Children of Mars” “Short Trek”, a full spread coverage on the LA, AND deep dive into the latest teaser released by Amazon Video featuring Data…